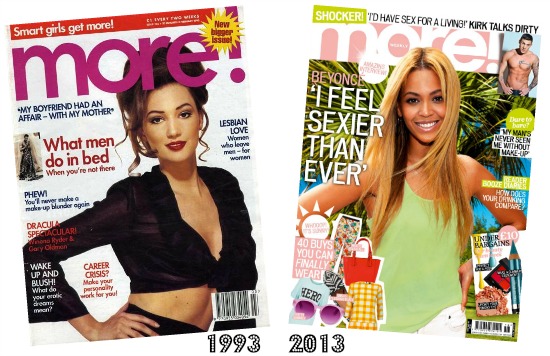 It’s always sad saying goodbye to something you grew up with. That’s why there were tears when Take That split up in 1996 (if only we’d known back then that they’d reform in 2006.) That’s why there were groups of 20-something friends drinking wine while watching the last ever episode of Friends going out on C4 (if only we’d known back then that it would be repeated on telly every day until the end of time.)

And that’s why this week there was great sadness when it was announced that More! magazine will be closing. Not just sadness from the team (who went straight to the pub to neck cocktails and wine when they were told the news at 10am on Monday), not just sadness from people who used to work for the magazine (my Twitter feed was filled with respected glossy magazine and broadsheet journalists talking about having once worked there) but sadness from, well, pretty much every 20 and 30 something female who grew up reading the mag.

I was a nine-year-old Bunty reader when More! launched in 1988 and it wasn’t until I was 14 that the magazine was on my radar. As an ardent Smash Hits and Just 17 reader, the 14-year-old Alison would flick through More! in the newsagent and snigger at Position Of The Fortnight and the Sex Confessions. Aged 19, I was a regular reader, turning my nose up at my flatmate’s issue of Marie Claire in favour of More!’s humour and laddishness. It was so refreshing to have a magazine that called a spade a spade. It talked about girls drinking lots and going out on the pull – and it was genuinely funny. Working on other magazines, in my early 20s, More! was regularly held up by editors as an example of a magazine with brilliant personality and tone. We aspired to write as well as the More! writers did and come up with ideas as original as the ideas they generated. As a young writer, it was one of the magazines on my “Would Love To Work For” list (also on that list: Smash Hits, Heat and Glamour). Working on More! for five years was simply brilliant. It was an office filled with gossip, laughter, music (mostly John Barrowman showtunes at one point) and talent.

So I’m pretty sad that the magazine will be closing, after 25 years, but not just for nostalgia’s sake. I’m sad because More! magazine’s demise is indicative of the decline of young people reading magazines. Even though in recent years, More! wasn’t aimed at teenagers (I believe the age of the average reader was 24), it was read by teenagers, and teenagers just aren’t buying magazines like they used to. In fact, the number of teen mags that have closed in the last ten years is depressing. ELLEGirl, Cosmo Girl, TVHits, cd:uk, Smash Hits, Sneak, Sugar – all brilliant in their day but no longer with us, due to dwindling copy sales.

It leaves me wondering whether there will be any teenage magazines left in 11 years, when my daughter Grace turns 13 (Bliss and Mizz magazines – I’m counting on you to keep going.) Where will she read problem pages and learn about the stuff agony aunt Anita Naik talked about in Just 17? Where will she read real life stories about girls facing emotional challenges that will make her wonder ‘How would I cope with that?’. Where will she get that feeling of support and of being part of a friendly community? Of course, I realise that the main culprit behind fewer young people are buying magazines is the internet, and you could argue that there are plenty of good teenage websites that can offer all of this, and more. But at risk of sounding like an old person, it’s not the same.

Luckily, us mums hold the key to solving this problem. It’s simple. The answer is pre-school magazines. My toddler loves them – whether it’s Peppa Pig magazine, CBeebies magazine or Favourites – and as mums, all we need to do is encourage our kids to read magazines, to grow up loving them, to allow them to form weekly reading habits, moving onto older titles as they grow, and then by the time they hit 13, the publishing world will have taken notice of this trend and new teen mag launches will spring up just when we need them.

I love technology. I’m a huge geek. But let’s not allow magazines to die out. They rock.