I recently offended a colleague by referring to her as a “Twitter friend”. You see, we first made contact with each other on Twitter (around a year ago, I tweeted her to tell her I’d just discovered her blog and loved it) and she has recently started working in the same office as me. I don’t think she was genuinely offended, more mock-offended for comedy value, but it got me thinking about Twitter and Twitter friends.

It’s mindblowingly amazing that since Twitter got huge here in the UK in 2009, the way we form friendships has changed so much. Before then, the norm on social platforms like Facebook, MySpace, Bebo, Friends Reunited (remember that?) was to connect with people you already knew in real life. To begin with, I carried this practice over to Twitter and for months, I blocked strangers who followed me. (Actually cringing at the memory. I even blocked someone who has now become one of my favourite people to follow – Michael Hogan.)

But it’s really since becoming a mum that I’ve formed Twitter friendships. It started with just one or two – mums whose blogs I’d discovered and who were tweeting at 3am while I was awake with matchsticks propping open my eyelids, feeding my baby – and gradually, more followed me and I followed back. I don’t even remember how conversations started. Possibly by me just butting into a chat they were having with someone else, or by replying to a random tweet they’d sent out. Now, I can log on to Twitter and more often than not, catch up on what these friends are up to, and have a quick conversation with them.

I’ve never met most of these people. But I feel like I know them. I know when they’re going through tough times, or having a scary moment, or doing something really exciting or celebrating something or just watching a crap TV show and making witty comments. I know little details about their lives. For example, I know that Mummy Barrow likes to start the day with a cuppa. I know that Katie loves a bubble bath. I know that Aimee is excited about having written her first book. I know that Gill has the same buggy as the Beckhams. I know that Molly loves a Friday night wine. I know that Kelly has his’n’hers bathrooms. I know that Alice’s daughter likes to sleep in odd positions. I know that Charlotte loves Ryan Gosling.

It reminds me of that same nice feeling you’d get, as a kid, when a pen pal sent you a letter. Pen pals were ace. I scanned the pen pals section of Smash Hits every fortnight, working out whether each person would be a good friend-match for me. As a teenager, I wrote to other girls who were as obsessed with Take That and Boyzone as I was. We found each other through little handmade books called FBs (Friendship Books). Each book would be passed on from friend to friend, each person writing their name, address, which bands they liked (and usually boasting about how many times they’d met/hung out with/been to the pub with/been on tour bus with said-band). Books would be sent around the world, and then when they were full, they’d be sent back to the person who made it. It was social networking before the internet was widely used (around this same time, in my Computer Science class at school, my teacher was telling us about – imagine him doing inverted comma fingers – “electronic mail”).

With Twitter friends, you can dip in and out again, with no pressure. If you don’t log in for a few days, there are no passive aggressive messages from them about you being too busy for them. These people are pleased to see you when you’re there, but it’s no big deal if you’re not. If you’re having a bad day, a quick Twitter exchange with a friend can lift your mood or even just distract you from your problem. And I’m bloody nosy, so it’s fascinating to take a peek into other people’s everyday lives. I’d love to sit in the pub with them all one day (I expect it would look much like the scene below.) 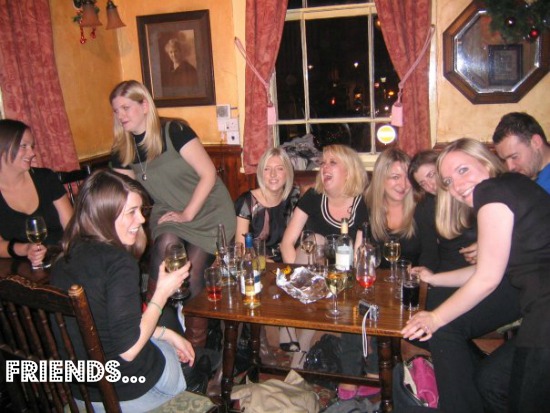