Victoria Beckham spoke at the Vogue Festival in London today, and I was in the audience. She spoke at length about her fashion business, her inspirations and her future plans, but it was hearing her talk about being a working mum that really got me listening. When you hear of female celebrities talk about how hard it is being a working mum, you’d be forgiven if your first reaction is to roll your eyes and say “How can it be hard, dear, with your nannies and chefs and drivers? Get with the real world.”

And I’d agree with you. Celeb mums can’t really know what it’s like in our world, can they? They have it so easy. If they have to work late, the nanny can collect the kids from school. They don’t have to worry about having time to dash to Sainsbury’s on the way home, to pick up some chicken kievs for tea, or how they’ll find the energy to cook dinner when they get home. Their staff do it. They just pick up the phone and someone can help them solve any problem they have.

But today, seeing Victoria Beckham speak at the Vogue Festival in London, something struck me. Here was a 30-something mum who has staff, and all the help she needs, but she still feels mum-guilt. All the money and success in the world can’t make that vanish. “As a mum, you feel guilty every time you walk out the door to work,” she revealed to Vogue editor Alexandra Shulman, as I watched from the audience. “You feel so torn. It’s the same for any working mum out there. You just do your best, but constantly feel guilty.”

Sadly (for us) Victoria Beckham doesn’t have the answer to getting this balance (that’s the holy grail, right?) and it seems she’s incredibly lucky in that the people she works with in her fashion business are happy to work around her home life. “I have great people who handle my schedule,” she said. “Everything revolves around my children. So if there’s a nativity play to go to, or an Easter bonnet parade, I can always be there. I really enjoy being a mum. I’d do anything for them.”

I admit, as she said this, I felt a pang of envy that she probably doesn’t know what it’s like to have that awkward conversation with her boss about leaving half an hour early every day, to get home in time for the nursery closing, but then she revealed that she has been on the other side of that very conversation. “My head of sales is a woman and she has three kids. She is great at what she does and I know she has to leave work at a certain time each day. It’s fine and it’s doable. As long as you plan and you focus, anything is achievable. You can work around any situation.”

And it sounds like Victoria works hard to make her company as mum-friendly as she can, encouraging employees to bring in their children when they need to. “We love to have children at work, with them running around, it’s a really good energy to have. The office is tiny and when Harper was a baby she had one of those swinging chairs. She would swing one way and bang into a load of fabric, and she’d swing the other way and bang into a bag of samples. So it’s a crèche, but a very small one!”

VB went onto talk about the differences between dads who work and mums who work, saying, “It’s very different. When a man gets up and goes out to work, leaving the kids at home, society thinks it’s OK. When a woman does it, she has to think about her home life and what’s going on there, as well as at work. It’s very different.”

I was fascinated to hear an insight into Victoria’s family home life, and it made me realise how tricky it must be to have a family with such a wide range of ages. “I’m up early in the morning with the kids, getting them ready for school, going through the times tables tests and spelling tests and all that kind of thing, which I’m sure every mum is used to doing early in the morning. But then I’m also up quite late at night because I have a baby and then I have a 14-year-old who refuses to go to bed…” She then paused and looked into the audience at her teenage son sitting on the front row, before saying, “…Brooklyn!”

“But late at night is also my time to do my own thing,” she said. “I pluck my eyebrows or do a face mask.”

So what did I learn from hearing Victoria Beckham speak, today? That there probably isn’t a mum in the world who doesn’t feel mum-guilt. Even those mums with Lanvin dresses and Stella McCartney skyscraper heels. They just look a bit posher while feeling guilty. 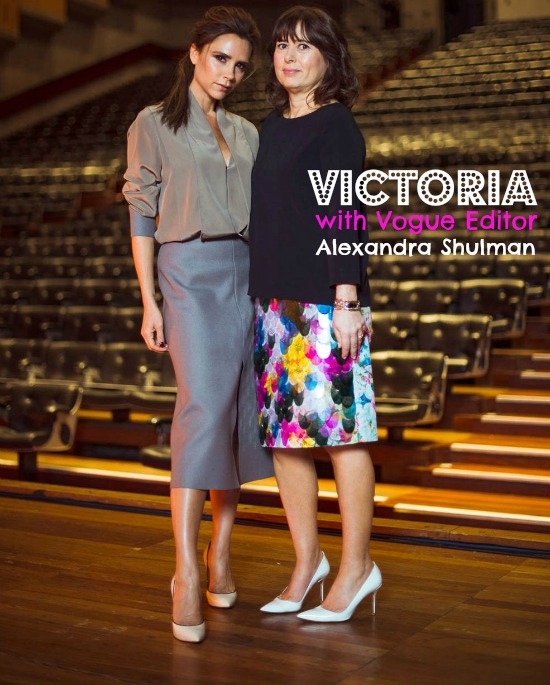