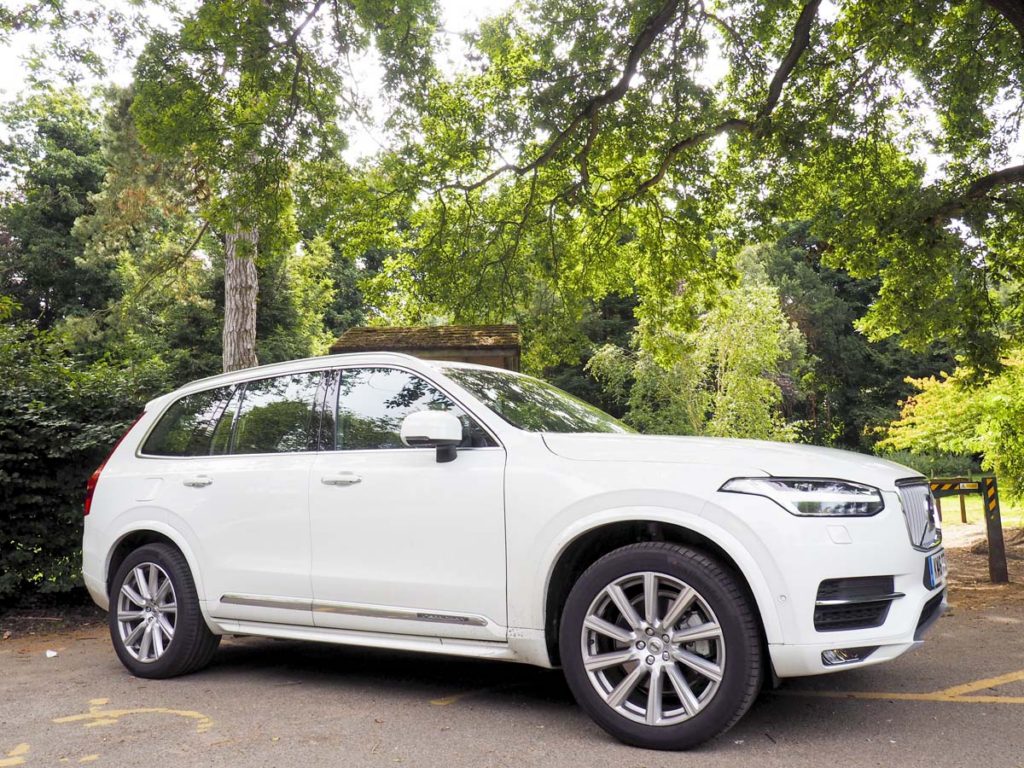 When I told Mr P we’d be driving from London to Dorset at the start of the school summer holidays for Camp Bestival, he looked at me like I was mad. “It’ll be bumper to bumper all the way,” he warned. But I had a trick up my sleeve: we’d be driving the Volvo XC90.

This car is the actual dream for travelling long distances – and in traffic jams – thanks to its adaptive cruise control and Pilot Assist. More on those later! Our Volvo XC90 was also an automatic, which made it loads easier to drive, especially when we had lots of stopping and starting on the country roads. 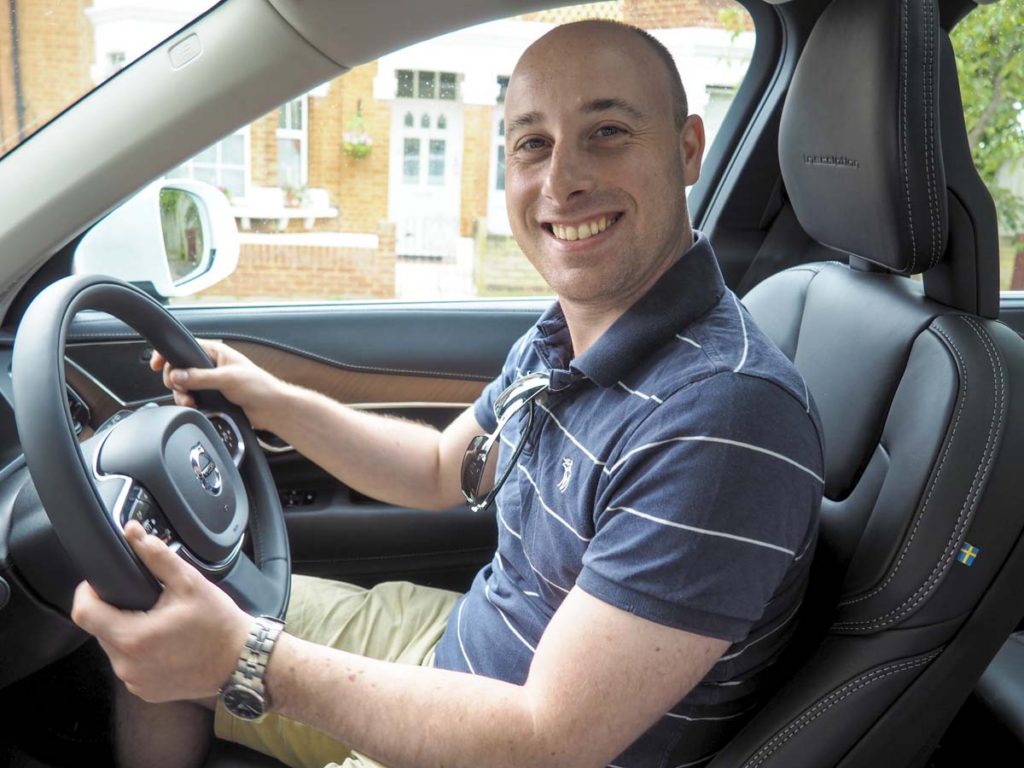 So we packed up the car –  we had a lot of stuff to take to Camp Bestival so thank GOODNESS for the huge boot, which gives you the option of two more seats, making it a 7-seater. Being a small family, we didn’t need the extra seats, which meant loads of luggage space for us!

We popped the five-year-old’s car seat into the back, strapped her in and off we went! 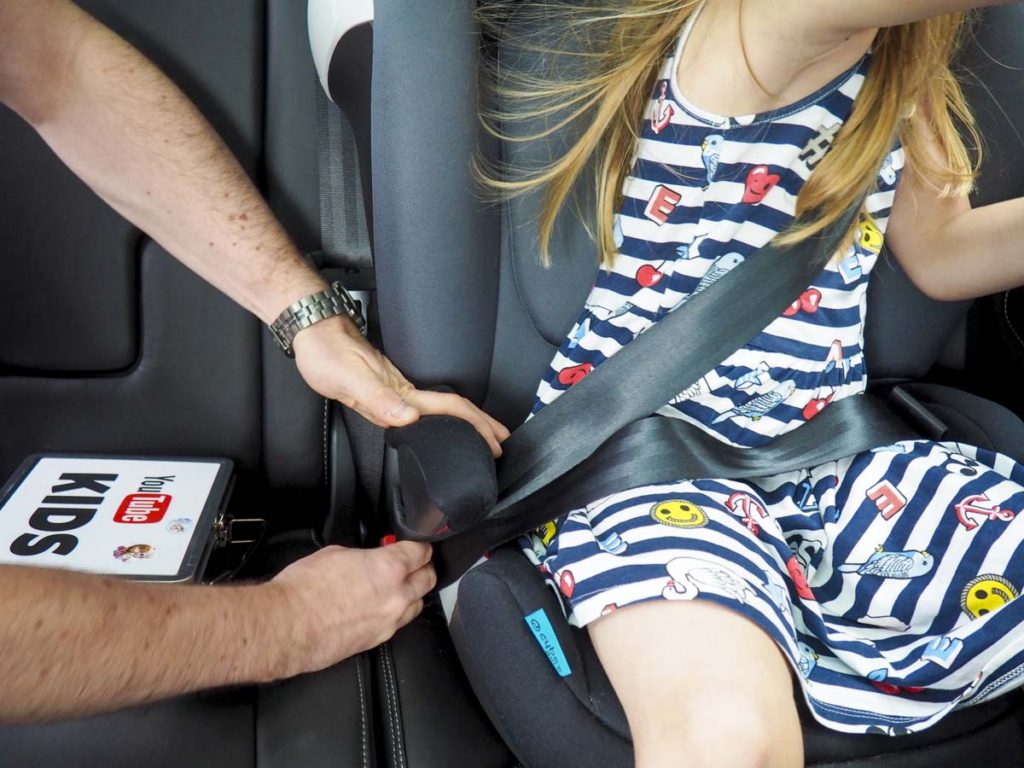 There are loads of features that made me fall in love with the Volvo XC90 (I never thought I’d hear myself say I’d fallen in love with a car…) Some of them are safety features and some are just things where Volvo have really thought about what their customers want and need from a car. It’s like they’ve actually sat in a room and discussed what problems drivers have, and how they can solve those problems.

The first thing that the five-year-old noticed was the window blind that she could pull up and hook onto the top of her window. She loved having control over whether she had it up or not, and we didn’t have her moaning about the sun being in her eyes. Genius.

I immediately started playing around with the 9″ portrait touch screen (Sensus) which controls the music, the sat nav and you can even link up your iPhone/iPad to it, with Apple CarPlay, allowing you to access apps and music directly from your car’s touch screen. It also turns into a camera screen, when you’re parking, with sensors at the front and back of the car (on both sides) to help you park. 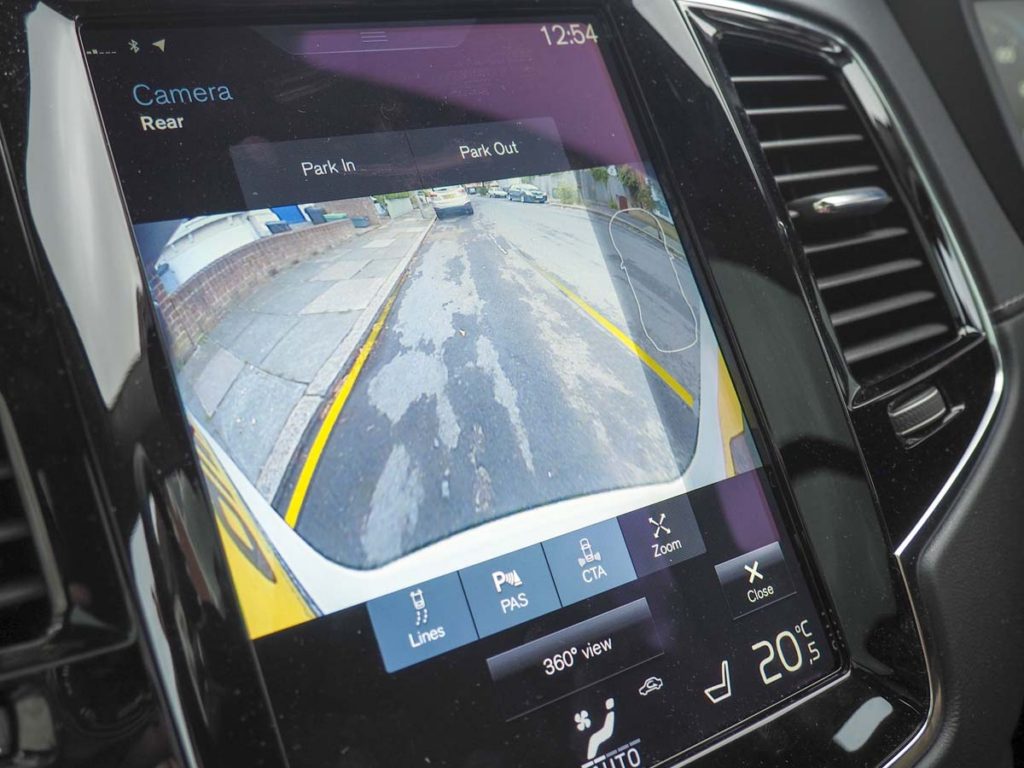 But it’s the 360° surround view parking camera that is truly jaw dropping. I actually saw this technology in action when I was in an Uber in Paris recently, and took a photo of it to show Mr P when I got back. The cameras and sensors project a bird’s eye view of your car onto the screen, to help you park. It’s amazing!  Watch it in action here.

One of Mr P’s favourite features was that the sat nav (voiced by an ever so polite lady) appears, not only on the big screen, but also  on the dashboard, meaning he just had to flick his eyes down through the steering wheel to be able to see the map. Such an obvious feature but one that makes a big difference.

As I mentioned before, the adaptive cruise control made motorway driving much easier – you switch on cruise control and when the car in front of you slows down, your car slows down too, without you having to brake. It’s an extra bit of peace of mind when you’re using cruise control.

Another nifty safety feature which impressed me was the red light that appears in the wing mirror – it comes on when the car senses that another car is passing, so on the motorway, if you are about to switch lanes and haven’t noticed a car in your blind spot, the light alerts you to it and you know not to change lanes. Even better, it’s in both wing mirrors, not just on the driver’s side. So clever! 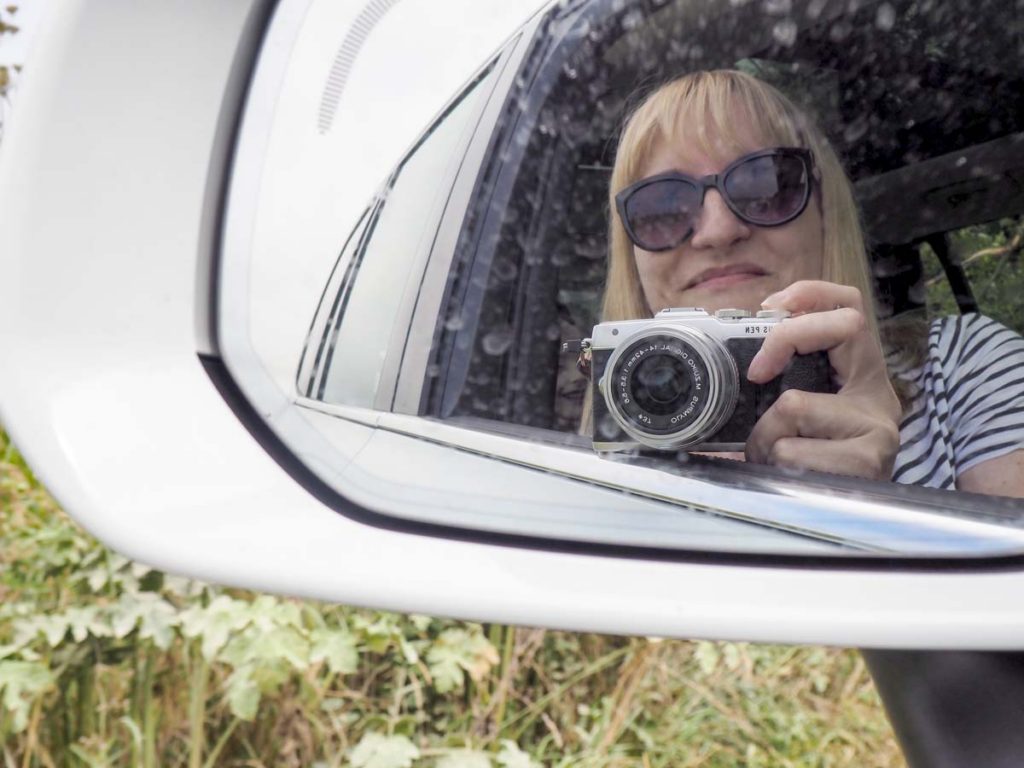 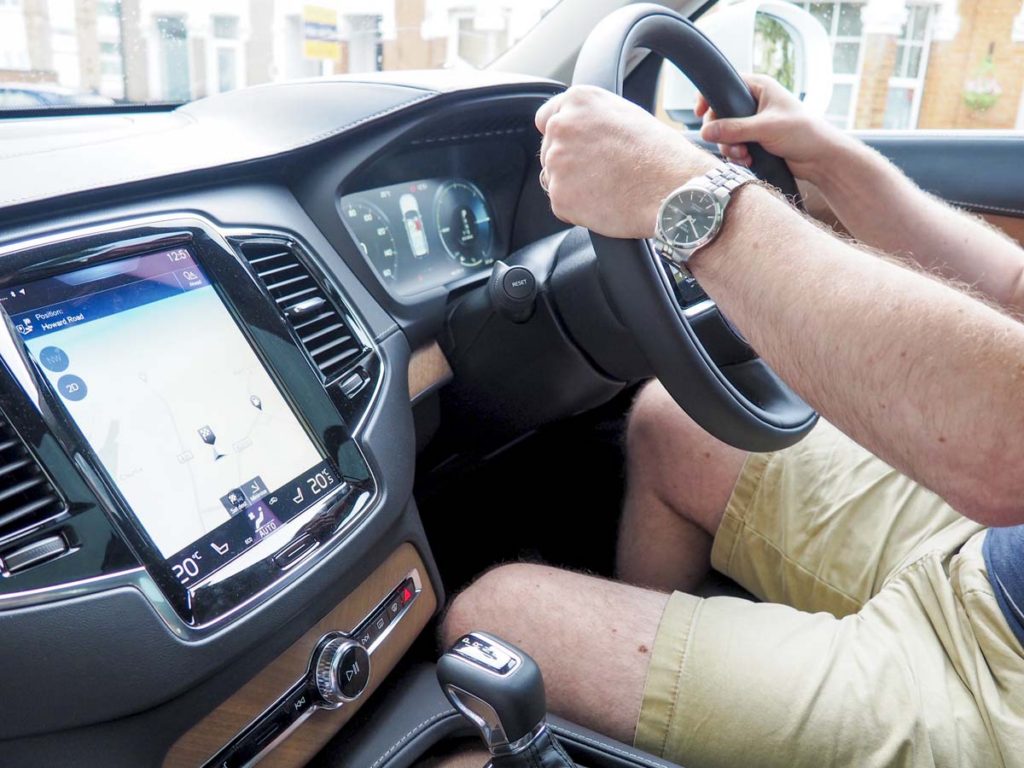 My absolute favourite feature is the boot opening and closing mechanism. It’s insanely brilliant. If you’re carrying a lot of bags to the car, you don’t have to struggle to open the boot, or put all your bags down to root around for your car keys. You simply pop your foot under the car, in a certain spot and the boot opens! (You do need to have the car key on you, for this to work, don’t worry, car thieves can’t just open your boot and climb in…) You can close the boot in the same way or press a button on the boot door, to close it. 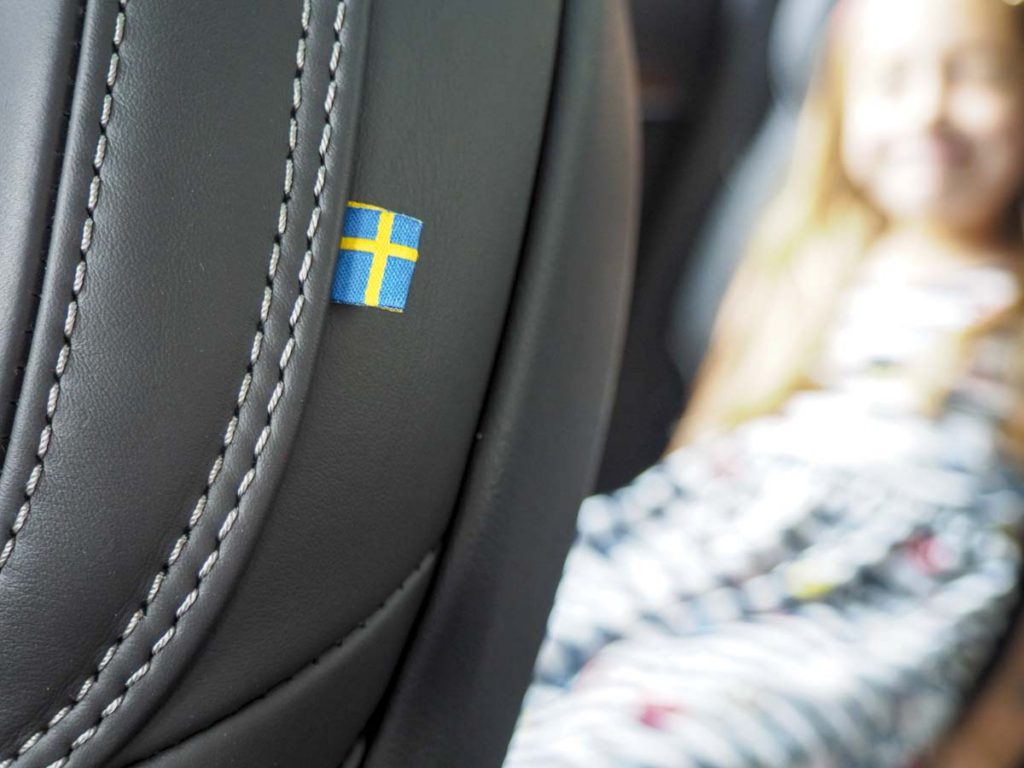 But Volvo have also thought about problems us drivers (and passengers) didn’t even realise we had. Feeling a bit tired or achey in the car? Don’t worry, you can switch on the massage option on the car seats. I’m not even kidding. You gotta love those Swedes and their brilliant ideas.

One of my concerns about taking such a big car to Camp Bestival was how much fuel we’d use – and I was pleasantly surprised. The Volvo XC90 is far more fuel efficient than I expected. Our normal car (slightly smaller than the XC90 but not much) might have only just made it there and back on a tank but the Volvo XC90 made it from London to Dorset on less half a tank of fuel.

This car ain’t small though. Thanks to the parking assist cameras, it was easy to park in all of the service stations we stopped at, but the back of the car did jut out of the parking spaces. I was a bit worried that another car might drive into the back of it, because it was stuck so far out of the parking space, but phew, that didn’t happen! So if you’ve got a big family, this car would be a cost-effective way of getting around. If your alternative is two smaller cars, to transport your kids around, the Volvo XC90 will work out well for you. If, like us, you’re a small family, the XC90 will probably be too big. Perhaps check out the Volvo XC60 instead. 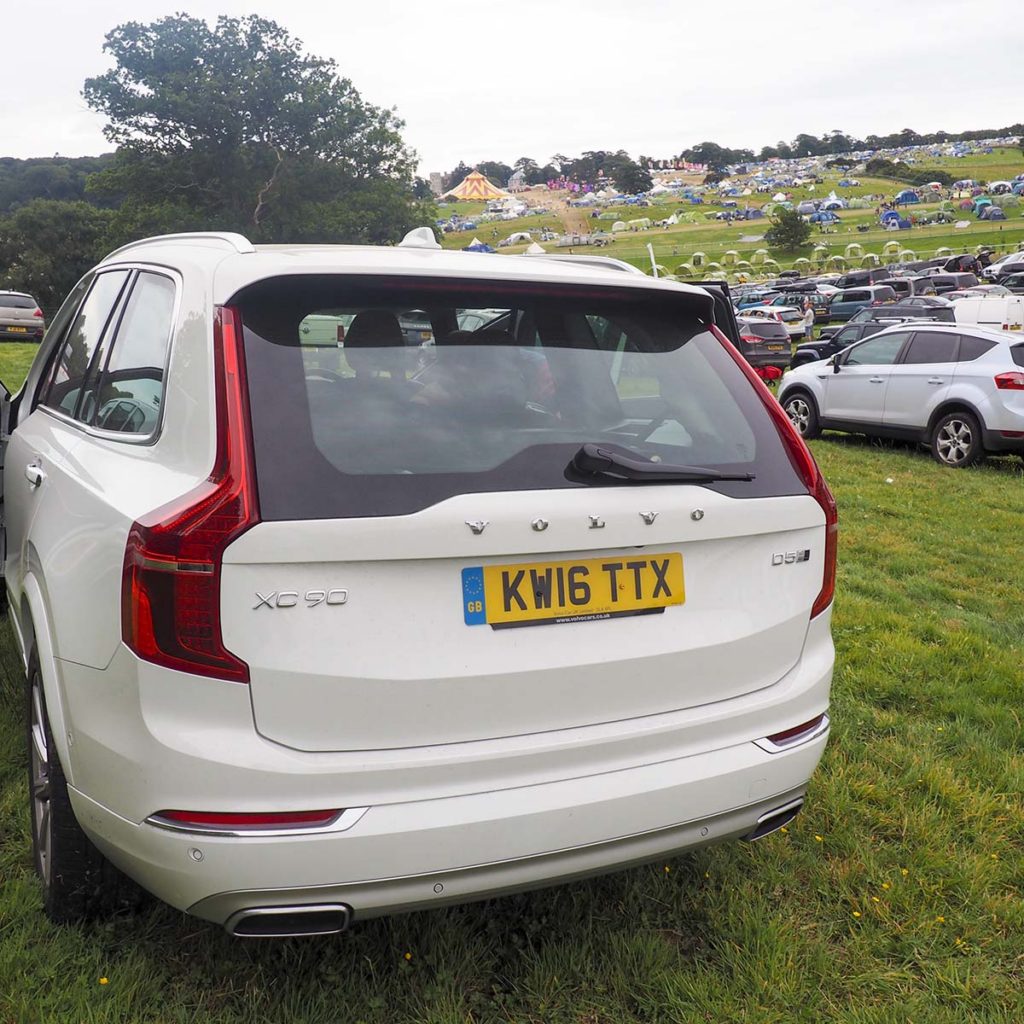 But we truly loved our experience driving the Volvo XC90 – it really came into its own when we hit the country lanes at Camp Bestival and we could put into a rough terrain mode. Watch a video of me and my Space In Your Case colleague Penny talk about the car from the festival. We were sad to say goodbye to the car, once the festival ended and we returned home. Our own car now seems so boring in comparison…

The Volvo XC90 is available with diesel, petrol and plug-in hybrid powertrains, priced from £46,850. Find your nearest dealer here. The model we tested is priced at £54,800.

Thanks to Volvo for supplying us with the Volvo XC90 and accommodation at Camp Bestival in return for this review. As always, all views are my own. For details on how I work with brands, see my Work With Me page.