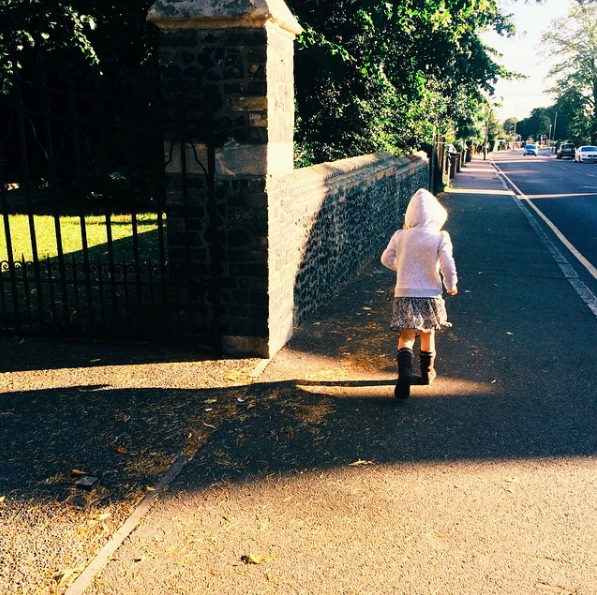 I’m sitting on my my sofa, working on the laptop as the evening sun streams into the living room window. Along the hall, in the kitchen, I can hear my four-year-old and Mr P. They’re making thank you cards to give to her nursery key worker and the rest of the team, tomorrow.

She’s starting primary school next week. Next week! How did that happen? I’m fairly sure it was just the other day, she was two and toddling along pushing a doll’s buggy that was nearly as big as her. A year ago, I wrote a post about not feeling ready to have a child start school. I’m over that. The four-year-old is totally ready, and therefore so am I. She is counting down the days to starting and thankfully, there doesn’t seem to be an ounce of nerves.

But what has surprised me is that it’s not the new beginnings that have shaken me, it’s the goodbyes.

I can hear her asking Mr P to write the sentence on some scrap paper, so that she can copy the letters and write the message on the card herself. “Thank you for looking after me” she is saying.

She’s been at that nursery since she was nine months old.

The nursery which saved my sanity by allowing me to pop her in for one day a week at that age, two months ahead of her official starting date.

The nursery which didn’t mind when I called up during her settling in sessions, to check how she was, while I sat in a cafe feeling physically sick that my baby was being looked after by “strangers”.

The nursery that changed her nappy hundreds of times, gave her milk, gave her cuddles.

The nursery which could get her to nap every afternoon long after she’d stopped napping at home (how did they do it? Apparently they have some back rubbing technique that sends them all off….)

The nursery which could get her to eat all sorts for lunch, like chicken korma and jambalaya, when all she’d eat at home was rice cakes and sausages.

The nursery where she’s learned to share – toys, books, even friends.

The nursery where she’s not just learned phonics and how to count to 110 but also the words to One Direction songs. Valuable, I’m sure you’ll agree.

The nursery which hasn’t just looked after her, as she has written in the card, but which has helped to shape her into the bright, happy school starter that she is.