OK, technically, she isn’t. But during my maternity leave, it certainly felt that way. CBeebies presenters Katy and Cerrie were like my girl friends and Sid, Andy and Alex were my bloke friends. I probably saw more of them during my year off work than most of my real friends (they were off working, socialising, having a life *bitter sigh*) and on many a day, they were the only adult company I had. Unless you count my local Starbucks barista. Which you really shouldn’t.

“Have you seen that adorable programme called Waybuloo?” I said to one of my NCT buddies one day, while she nodded enthusiastically. Life back then was all about new discoveries, but somehow realising that there was the whole new world of baby entertainment to get to know seemed exciting. It’s that same feeling you get when a NEW LUNCH VENUE opens up near your place of work and you have a whole new world of lunch options open to you. “Have you seen, there’s an Itsu sushi place opening up around the corner?” 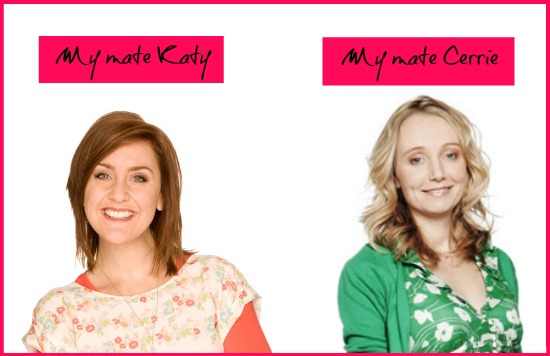 I would watch CBeebies with my baby, and spend 20 minutes trying to work out how Cerrie had managed to curl her hair like that (“Has she used curling tongs? Or GHDs?”) and I’d spend at least a whole day feeling jealous of the cute french plait that framed her face. I *must* learn how to do a french plait. I’d watch Katy and quietly admire her red skinny jeans, wondering if I could pull off wearing red jeans and a yellow hooded sweatshirt like she could. Would that look work in the real world, I’d muse, or does it only look good on the brightly coloured CBeebies set? The male presenters, I would imagine being in the pub with. They’d be a right laugh. Andy could even pull out his guitar at the end of the night – once we’d all piled back to his flat of course – for a sing song of 90s Britpop while we drank random Aldi-bought spirits from the back of his kitchen cupboard. (That’s what young folk do, right? I do need reminding.)

It’s only really now, two years on, that I look back and with hindsight fully realise how genuinely important these people were to me. And it’s because I think I suffered from post-natal depression. I say “I think” because I’m no expert. But it’s only now, with a bit of space to think and a bit of distance from those days that I recognise that not everybody seems to struggle like I did. Back then, I assumed every new mum dreaded 8am every weekday morning, when her husband/partner went to work, telling herself that it was only nine hours until he’d be home. I assumed every mum cried most days, sometimes out of exhaustion but mostly out of sheer despair that every night and day rolled into one long wave of anxiety. I thought every mum paced the streets (and shopping centres) with a pram, for seven hours a day, only stopping to change and feed the baby, just to avoid sitting in the house alone all day. I totally assumed that all mums felt physically sick at the thought of having another child for a year (or two) after becoming a mum.

The first moment I realised this might not be the case was when one of my NCT friends told me she was pregnant – our babies were eight months old at the time. I smiled and said “Congratulations!” but inside I was screaming “WHAT? Are you completely MAD?”

So Katy, Cerrie and co were hugely important to me during my year off work as a new mum. Their smiles and songs were aimed at babies and toddlers, but they made me feel better too. And all that time I spent pondering their primary coloured fashion choices and soft, unthreatening hairstyles distracted me from how I was feeling. I really *must* learn how to do a french plait…