In January, something in our lives changed. No seriously, it did!

We took our three-year-old to the cinema for the first time. It was something both Mr P and I had been looking forward to, because a) we love watching movies and b) it’s 90 minutes of quiet time, right? (Side note: a dad sitting in front of us actually fell asleep and woke himself up by snoring. Love it.)

The movie we went to see was Frozen. Given that we had been watching Tangled on repeat for around a year, we reckoned it was a fairly safe bet she’d like it. We were wrong. She didn’t like it. She loved it. In fact, she cried as the credits rolled at the end. In the days that followed, she asked to see “the ice princesses” on YouTube a lot – thank goodness the Disney YouTube channel had around six clips, including of course the now-classic anthem Let It Go.

But it was a couple of weeks ago that my three-year-old’s passion for Frozen really kicked in. The DVD release. Since then, we’ve watched the film over 20 times. My daughter asks to watch it while she’s eating her breakfast, while she’s eating her pre-bedtime snacks, oh and pretty much any time we’re in the house, ever. She’s now nearly word-perfect when singing Let It Go (and yeeeees, I have approximately 12 videos of her singing it in typical proud-mum fashion.) It’s OK, though, because I’m fairly sure the other diners in Pizza Express (and the customers in Marks and Spencer, and everyone walking along Bromley High Street) appreciate her ear-piercing warbling too. Er, right?

“I’m Elsa and you’re Anna” she tells her friends at pre-school, when they’re playing “Frozen”. She brings drawings home and proudly tells us “That’s Anna and that’s Prince Hans of the Southern Isles.” And she corrects you if you pronounce it “Anna”, saying, “No Mummy, it’s Auuuuna.” Oh. Sorry.

It’s fair to say my three-year-old is currently obsessed with Frozen. But rather than being worried by it, or finding it annoying, actually, I quite like it. Apart from the fact that it’s nice to see her develop a real love for something in the way that we all do (over the years, for me, it’s been things like Bunty magazine, Saved By The Bell, Sweet Valley High books, Degrassi Junior High and Take That) I like it because… well… I love Frozen too.

I know. It’s not a very cool thing to admit. Parents are meant to be all “Argh! I hate kids films!” and when it comes to certain children’s movies, I’m right there, thinking that. We recently went to see a Barbie movie. The three-year-old loved it, but for me it was as enjoyable as giving birth. Seriously, I want that 75 minutes of my life back, please.

But Frozen. I could listen to the musical score all day (which is lucky, because I do). It was co-written by Robert Lopez, a broadway musical writer, whose work includes Avenue Q and The Book Of Mormon. Which explains so much. I love a musical, and the numbers like Summer (Olaf the snowman’s brilliant song) and Fixer Upper make me want to put on some jazz shoes and step-ball-change across a stage.

As well as being written as a musical, the lyrics have a ‘modern’ feel to them (just think of Anna singing “There’ll be actual real live people, it’ll be totally strange” in For The First Time In Forever). Kristen Anderson-Lopez, who co-wrote the Frozen score with her husband Robert, has spoken about writing Let It Go, saying, “We got very emo. We decided we didn’t want this song to be a traditional Disney princess song, so we were listening to singer-songwriters like Aimee Mann and Tori Amos and Sara Bareilles, and we just wanted to approach this song in a different way. Actually, it was Bobby who kept saying, “I feel like if I were a high-school student, that this would be that moment that you had worked and you had studied and you hadn’t gone out and then you just failed a test miserably, and what would that feel like?”

And of course, the movie has a brilliant feminist message (unlike so many other Disney movies) but I hadn’t realised until now that the writers felt so strongly about creating a modern Disney heroine who doesn’t get saved by a prince’s kiss (Ugh, Snow White, you totally let down your sisters…) Kristen explains this, when she talks about a song from the film that was cut – a song that was about Anna and Elsa not being the perfect princesses that the world thought they were. Kristen says, “It got cut, but you can tell the whole movie is full of this point of view — as much as [screenwriter and co-director] Jennifer Lee and I could put in it, because we’re both Park Slope moms [New York’s version of Nappy Valley], we both went through the ’90s, we took the women’s-studies courses, and I knew I wouldn’t be able to push my kids on the swing at the playground if I had written a movie where the girl wore the puffy dress and was saved not by anything active she did, but by being beautiful enough to be kissed by a prince.”

So I’m happy that my daughter is Frozen-mad. If Elsa and Anna are her heroines then that’s cool with me, and I’m enjoying hearing the music blast out my house every day. Have I just broken an unspoken Mum Rule by admitting this? Probably. 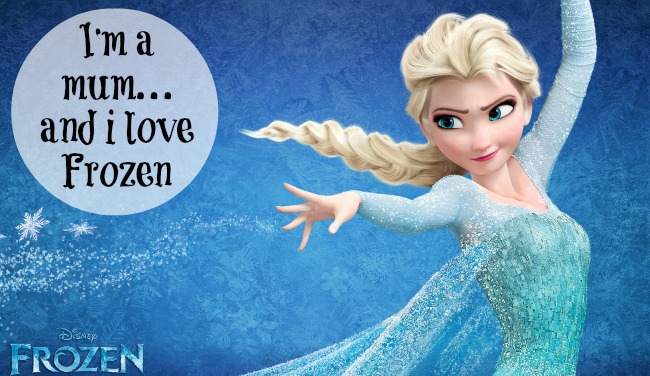