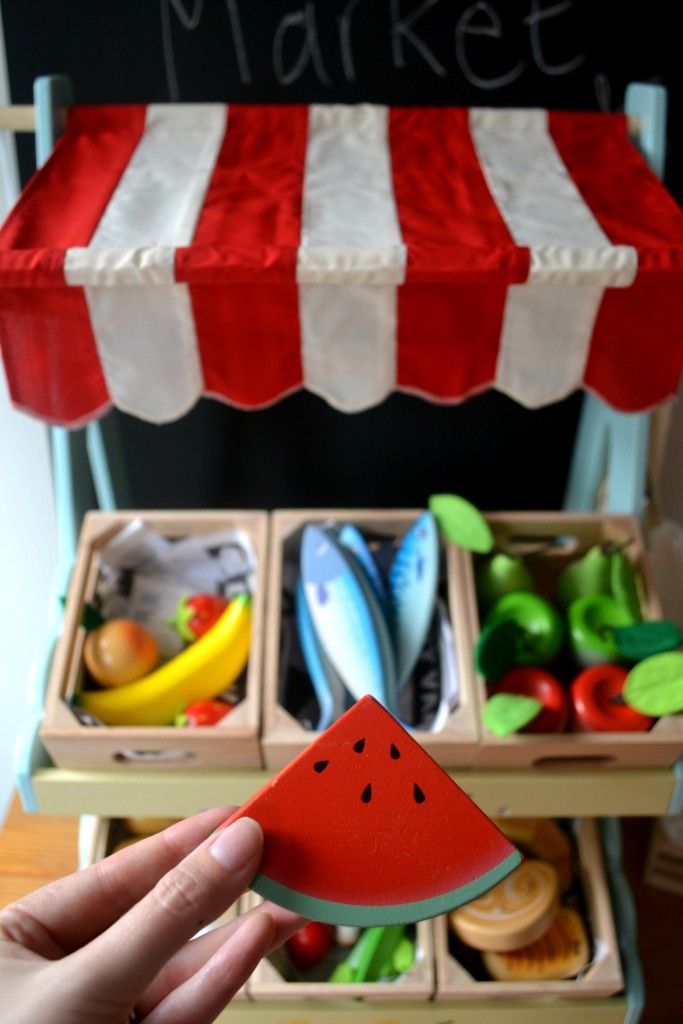 We took the four-year-old to see Father Christmas today. It was just fantastic to see her totally convinced that we were at actual Santa’s house and that she was meeting the man himself. There was a magical quality to the day – the garden centre we took her to has a whole 45 minute experience in the lead-up to meeting Father Christmas, starting with sitting in a ‘train’ to the North Pole, throwing snowballs at naughty penguins in a coconut shy-style game, making your own tree decoration and mixing reindeer food. The four-year-old loved it. Unlike last year, when she was too petrified of this man with a beard to speak to him, today, she bounded up, and when he asked her what she wanted for Christmas, confidently told him “An Anna cape” (the poor man didn’t have a clue what she was on about, so I stepped in to explain… he really should watch Frozen, to become au fait with the little ones’ requests…).

I tried to think back to what it must be like to ACTUALLY believe that Santa is real. I have memories of being aged five or six, trying to get to sleep on Christmas Eve but being so excited about Father Christmas flying through the air nearby. And memories of opening the living room door, to find presents on every chair, knowing he had been. It was the most exciting thing ever, wasn’t it?

This year, as well as an Anna cape (FYI I’m going to attempt to make one myself since you don’t appear to be able to buy one on its own) Father Christmas will be bringing the four-year-old an amazing Honey Bee Market by Le Toy Van. I can tell you this, because she doesn’t read my blog.

Le Toy Van is a brand I’ve loved for a few years. After spotting the gorgeous Honey Bake Tea Set on Mother’s Always Right, I treated my daughter to one, when she was two. Their wooden toys are just beautiful and the market is no different. We were sent the market and trays of food to feature here on the blog, and having given it a thorough testing (OK, Mr P and I *might* have pretended we were market traders…) it’s getting a big thumbs up from us. 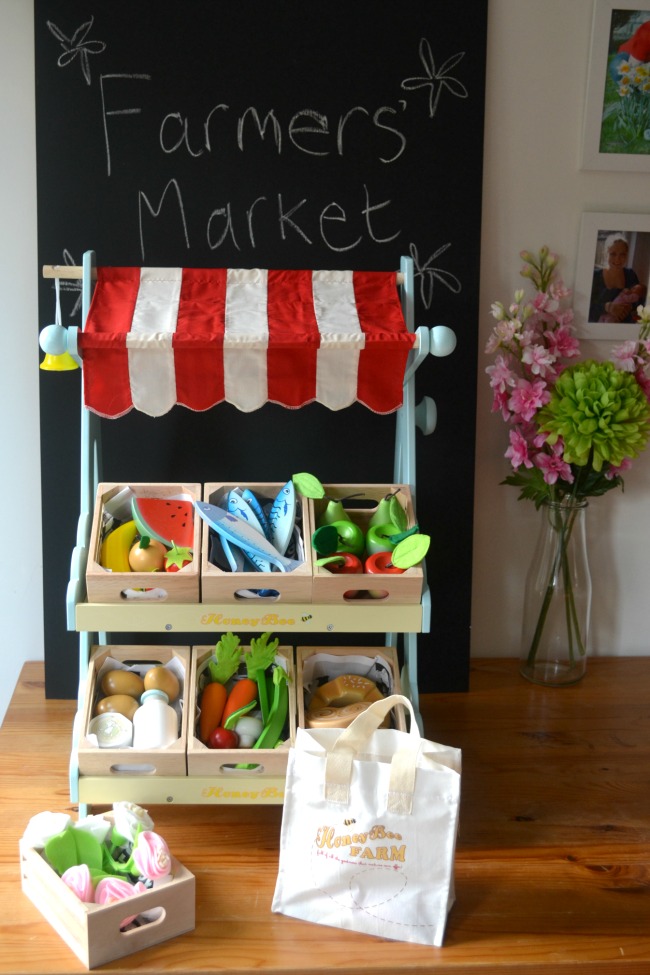 You’re right, of course, a farmers’ market is probably the most middle-class toy ever. Just add some freshly brewed coffee, The Sunday Times and an organic roast dinner and you’ve got the perfectly clichéd middle-class family Sunday.

But who cares when it’s SO CUTE.

It comes with a tray of apples and pears, a canvas bag and a little bell on the side, to catch the attention of your passers-by. You can also separately buy trays of fish, smoothie fruits, harvest vegetables, bread, flowers and milk/eggs. 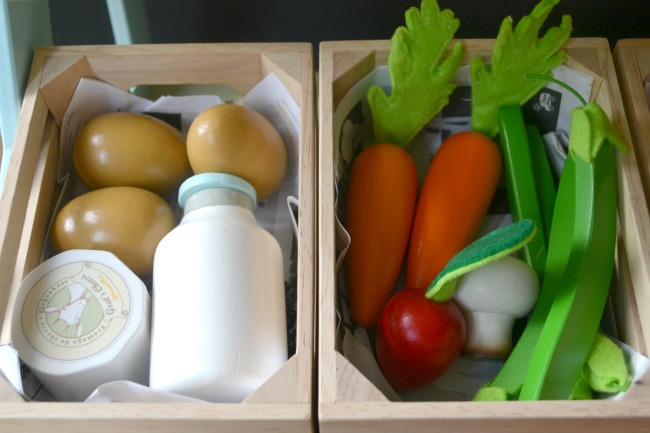 The attention to detail is brilliant – each tray comes lined with newspaper and some of the fruit and veg have felt leaves on them. The baked goods tray has a bagel and croissant as well as bread rolls.

The market stall itself has a fab striped canopy, and was easy to assemble (according to Mr P). If you don’t want to buy the separate trays of food, the shelves of the market will happily house toys food and shopping items your little one might already have. 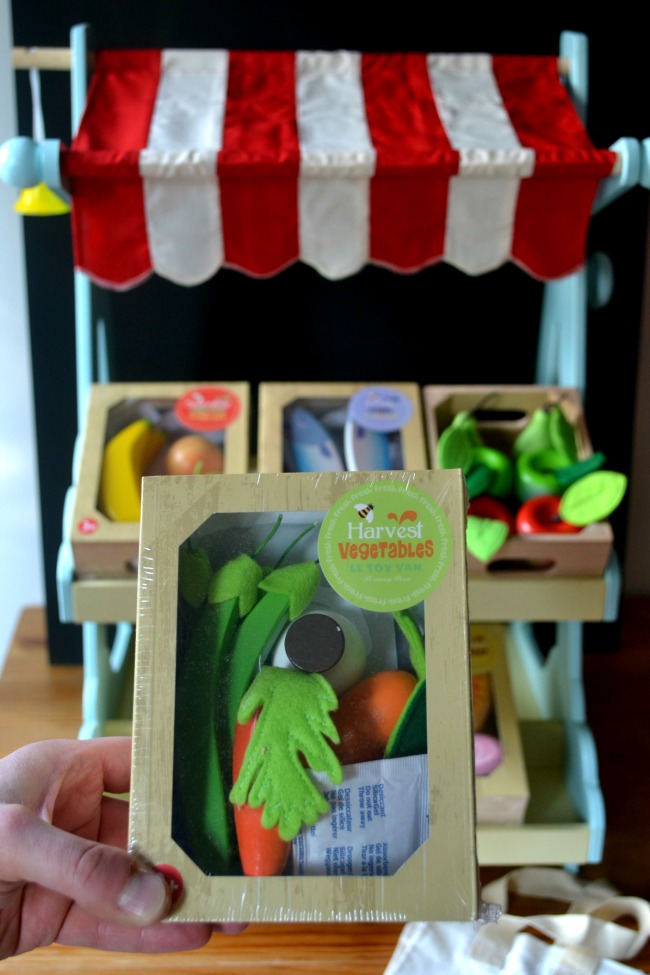 We popped to B&Q to buy some MDF and painted it with blackboard paint, to create a backdrop for the four-year-old to write on with chalk. It’s intended for marketing messages to pull in the punters, but I predict she’ll write her name REALLY BIG on it and nothing else. 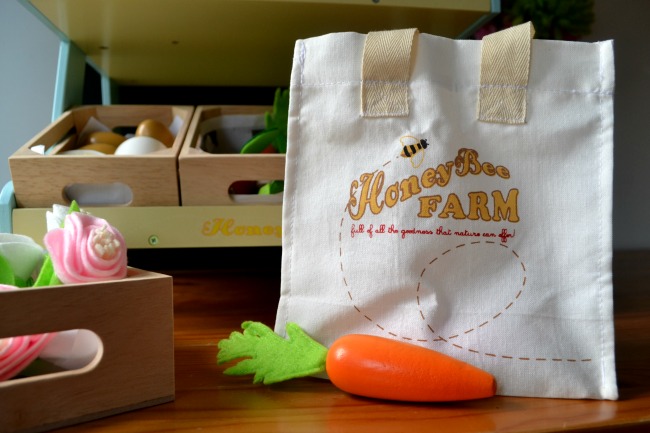 I can’t wait to see her face when she sees the market on Christmas Day – she’s at that age when role play is one of her favourite things. She’ll often spend a good hour in her bedroom playing ‘teacher’ with her toys (“I’m over here doing paperwork” she told me once when I asked her what ‘Teacher’ was doing…) so I just know she’s going to love this.

If you love what you see and want to buy one for a child in your life, Amazon sell the market for £55 and you can still order and have it delivered before Christmas. The trays of food are on Amazon for between £12 and £15 each.

• Big thanks to Le Toy Van for sending us the Honeybee Farm Market and trays of food.