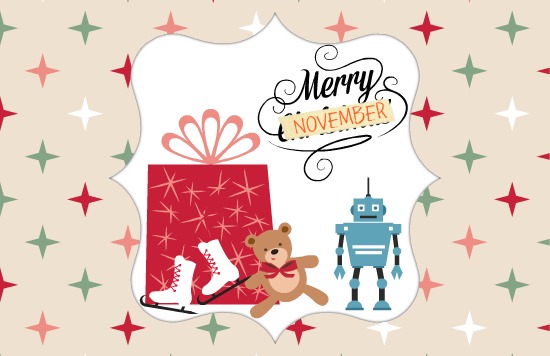 I had to check the calendar today. Anyone would think that it’s December 20th. Three houses on my street have Christmas lights up, one has a wreath on its door and a house on a nearby street has had a Christmas tree up for over a week. On Facebook last week, four or five friends posted photos of their Christmas tree and one of my colleagues told me she’s got her entire house decorated in a festive way. Today, around 20 more people on Facebook and Twitter have referred to buying or decorating their Christmas tree. We even took our three-year-old to see Father Christmas today (disclaimer: the whole of December had sold out and through gritted teeth, I bought tickets for 30th November. I kind of hate myself for doing this.) Christmas has most definitely started.

Since when did we start celebrating Christmas in November? Growing up, we bought and decorated our tree some time between the 15th and 20th of December. We were talking about, and planning, Christmas long before that of course, but we didn’t start celebrating much sooner than that.

I blame the retailers. They’ve always started ‘celebrating’ Christmas sooner than most, and they’ve got to really. They hope to boost sales by whacking on the Shakin’ Stevens, whacking up the tinsel and offering gift sets galore. Often, shops doing this acts as a helpful reminder to me, to start making a mental Christmas present list for my family members.

But things have started to change. 25 years ago, the January sales were big news. Then, 20 years ago, it was all about the Boxing Day sales. We’d rush to the shops, bellies still full of turkey and Quality Street, to pick up some bargain buys with the vouchers we’d received as a present. Then, when I was a student and working in a well known department store (it rhymes with ‘Febenhams’) I was aware of us starting our sales on Christmas Eve. Christmas Eve, I thought? This is a bit crazy. But a bonus to anyone who hasn’t done their Christmas shopping yet and can get a real bargain. And slowly, since then, the start of the sales has crept further and further forward, until the last couple of years when the beast that is BLACK FRIDAY has hit our shores. (I’m not even going to touch on the fact that it’s a post Thanksgiving shopping event in the US and we don’t celebrate Thanksgiving here in the UK – there has been plenty of that on Twitter.)

So now, the January sales start in November, which is great when it comes to saving some cash doing our Christmas shopping. And I guess the retail world has changed so much in the last few decades, so it has to adapt and keep up with shopping habits. Fair play, shops.

But it’s our decision to align ourselves with the shopping world’s “Start Of Christmas” that bothers me. Us normal folk have stopped rolling our eyes at the bauble-clad-shops-playing-Buble-in November and we’ve actually bought into it! The bosses of the retailers must be rubbing their hands with glee (I also imagine them standing at the top of a glass sky-scraper, wearing a power suit, laughing an evil cackle….). They have actually succeeding in convincing us that Christmas (which, let’s just remind ourselves is a ONE-DAY event based on the birth of Jesus Christ) starts in November.

Yes, you could argue that children have long started celebrating on December 1st, with advent calendars, but that’s opening a door to reveal a picture in the build-up to Christmas Day – build up, not daily all-singing all-dancing celebrations. And I kind of get the December 1st thing – I think it’s blooming early to decorate your house in Christmas kit, but at least it’s the actual month that Christmas falls.

It’s important to mention here that I love Christmas. Like LOVE it. I’m that person who plays Mariah Carey in the office and gives everyone some tinsel to put around their Mac monitor. I embrace the Secret Santa thing. I love making lists and shopping for everyone’s presents. I take great joy in selecting my Christmas cards each year and even manage to write and post them by the final Royal Mail posting date. The tree decoration evening is done in a serious way – festive music on, Baileys poured, the lot.

But it makes me sad that we’re disrespecting Christmas by starting to celebrate it too soon. We’re making a mockery of it. And Christmas is too special to be made a fool of. 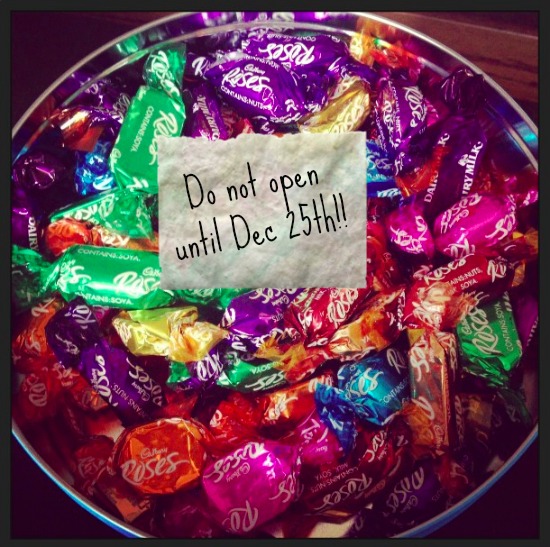