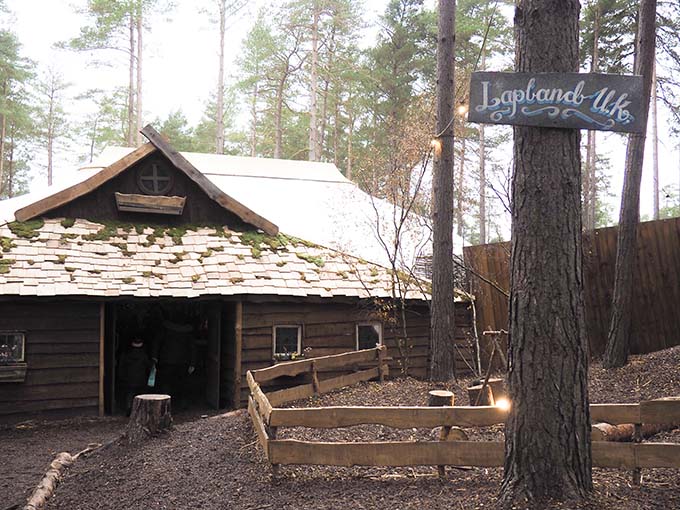 Snow-covered trees, twinkling lights, elves and serious fun – there’s no denying that Lapland UK is absolutely magical. We visited with the five-year-old and from the moment we stepped out of the car and followed signs for the Enchanted Forest, it was spell-binding.

A few weeks before our visit, our little one was sent a personal letter from Father Christmas, asking her to come to see him in Lapland UK, and to help his elves make some toys. It’s a special touch and the five-year-old was very excited to have a letter from the man himself.

When we arrived, the check-in process was slick, and the elf doing our check-in was really friendly, asking the five-year-old if she was excited about meeting Father Christmas. The elf handed over an Elf Passport, which would be stamped after each activity, and gave us a Husky sticker (there are two groups – Husky and Reindeer – which go through Lapland UK separately.) 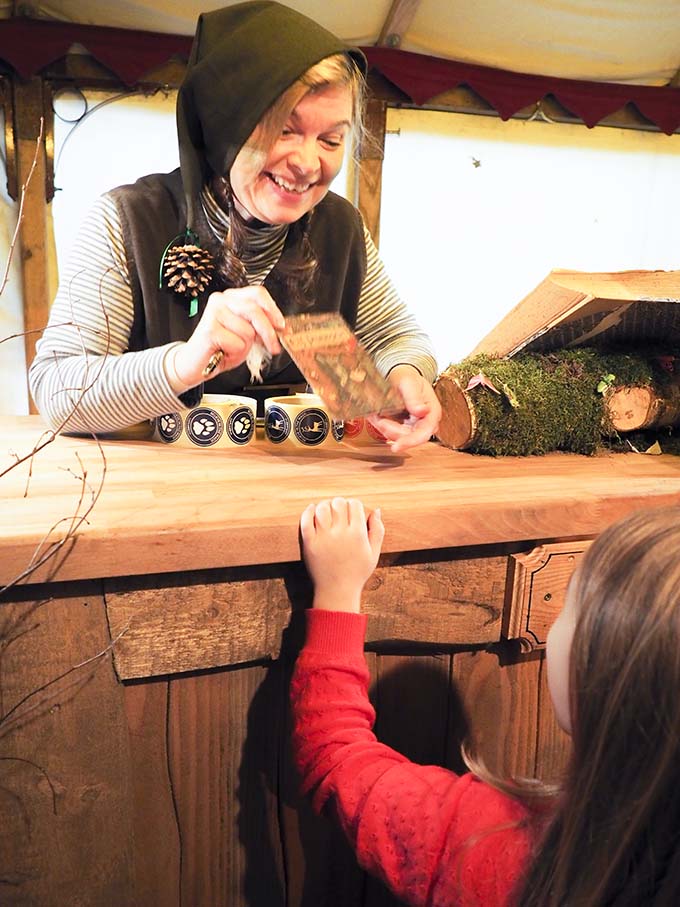 The check-in area is a wooden building, decked in fairy lights, and has lots of picnic tables and a cafe selling coffee, bacon butties, cakes and pastries. There was an excited buzz in the air, and we had the feeling that this was going to be a special day. 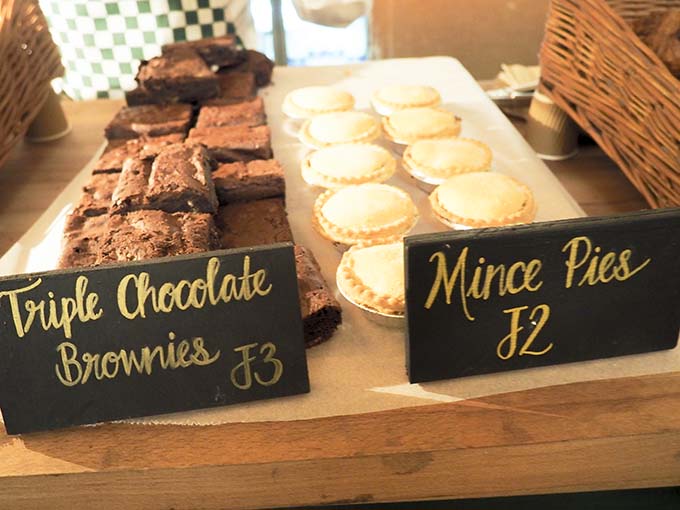 After we’d munched on a pastry or two, it was time to follow an elf into an indoor area decked in trees, fairy lights and rows of benches. There, two elves explained a bit more about Lapland UK and told the children that they have an important job to do, there.

After we all repeated a magical elf poem, the door was opened and – I’m not going to lie to you – seeing the trees and paths outside all covered in snow is a pretty breathtaking moment. 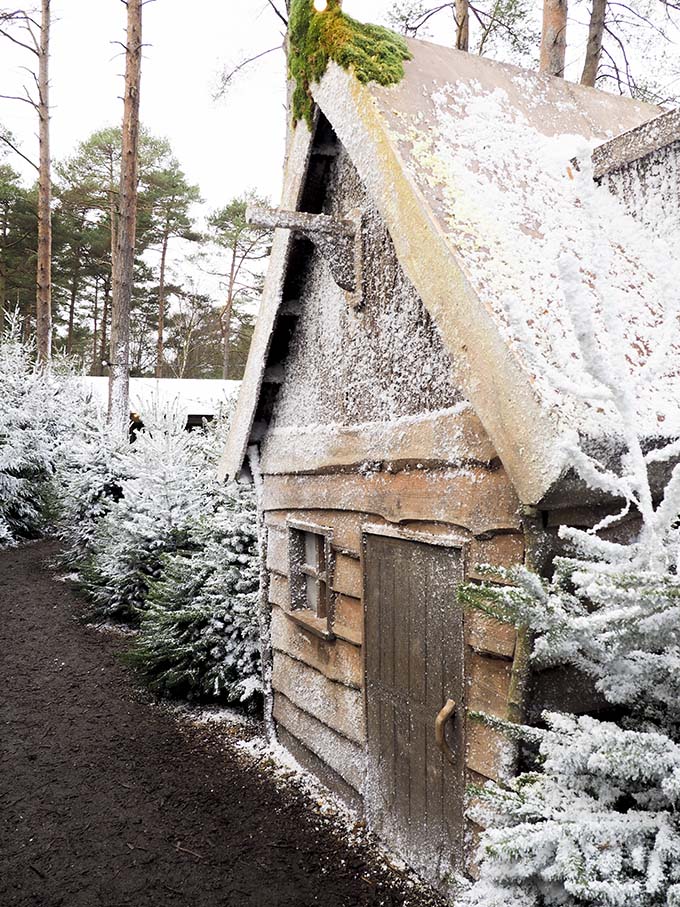 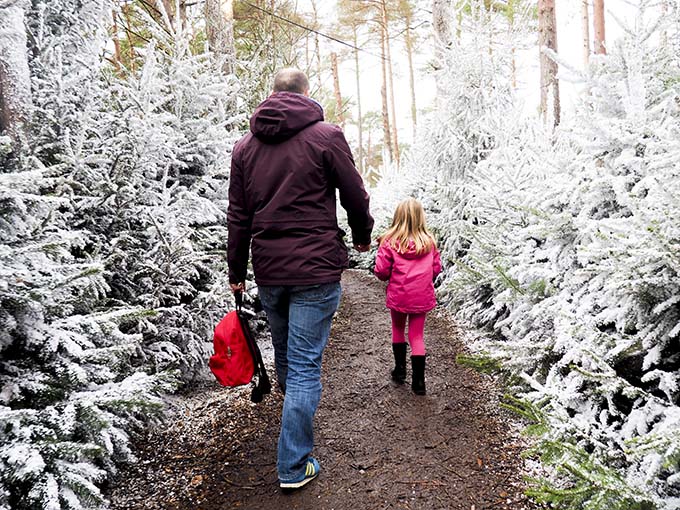 We headed off down a snowy path through the forest and got to a little hut – Father Christmas’ toy factory. After the children entered via their own small door (cute touch!), they were met by three more elves inside, who talked them through how to help make a toy reindeer and wooden horse, for Father Christmas. 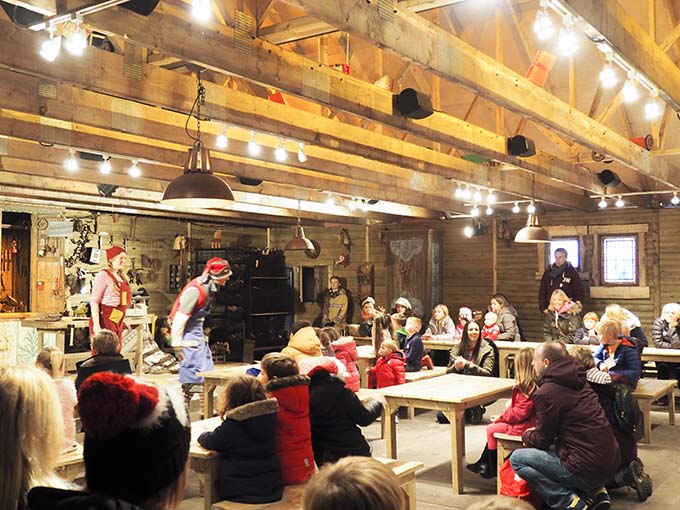 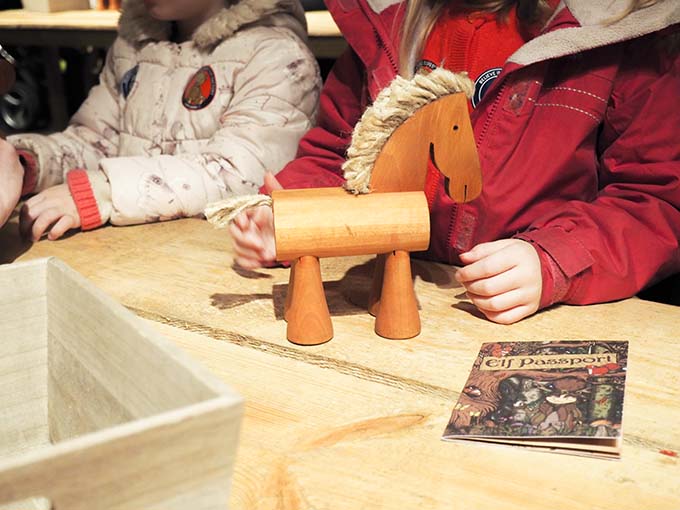 From there, it was off down more snowy paths to Mother Christmas’ kitchen. There, the little ones all decorated a gingerbread house biscuit with icing and sweets, before listening to Mrs Christmas telling a special story. 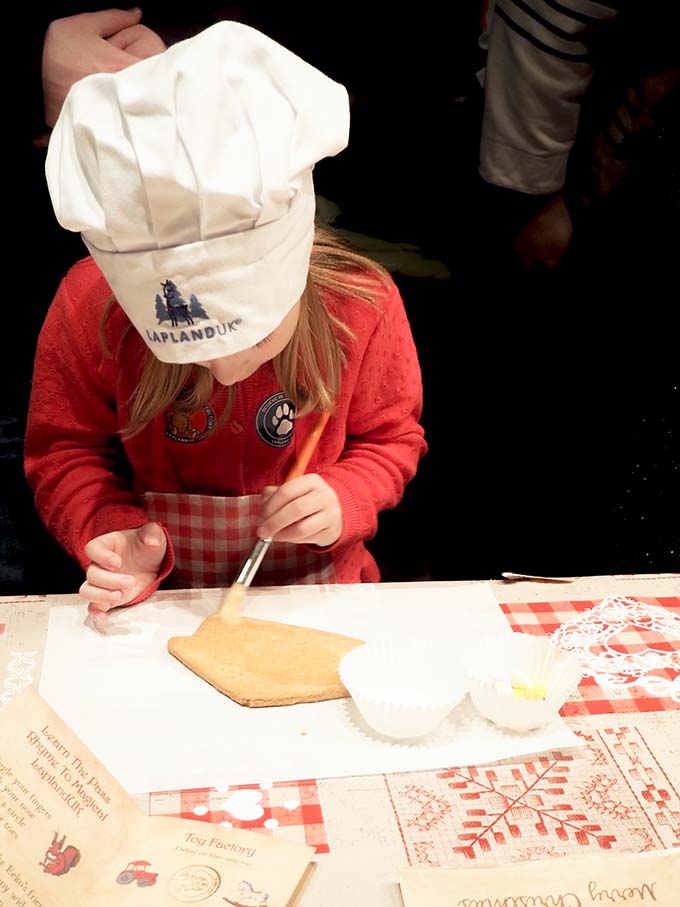 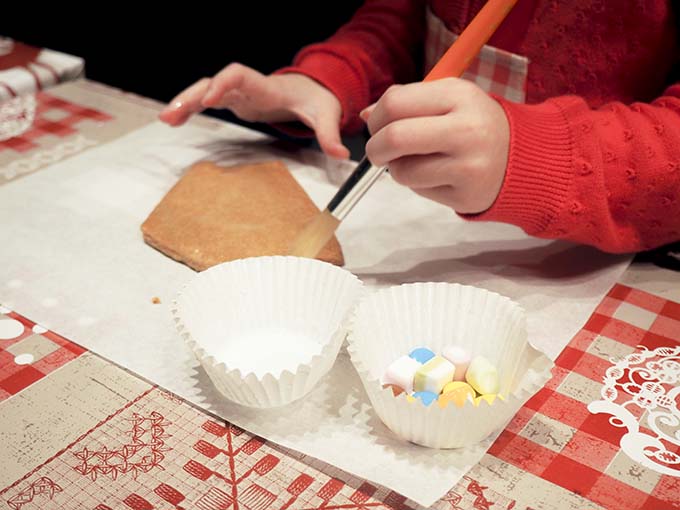 Then it was out into the Elf Village, where we had 90 minutes to explore. We headed straight for the ice rink because the five-year-old was desperate to skate. I lasted 60 seconds on the ice before getting off (“I have to take photos!” I told Mr P….) but they stayed on the ice for a good 45 minutes, and loved it. 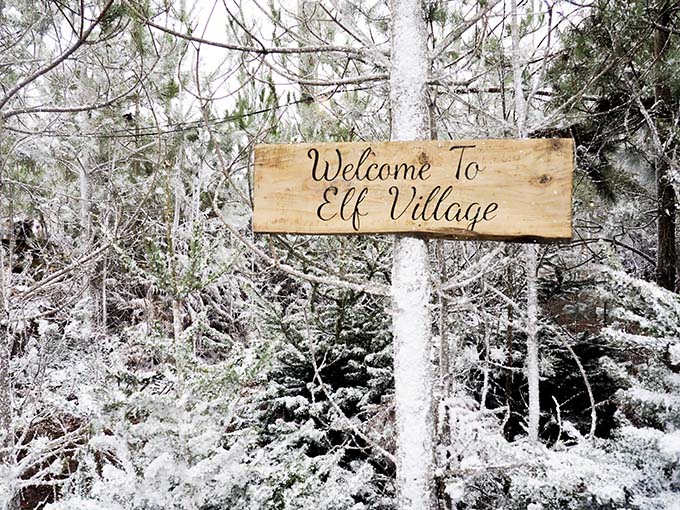 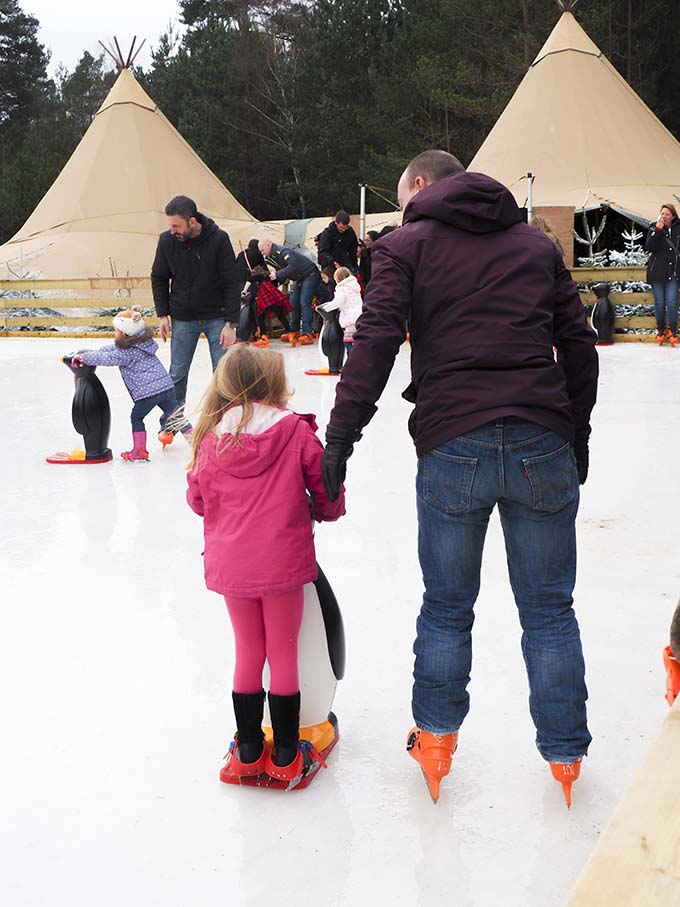 The Elf Village also has a hot drink stand, a gift shop, a sweet shop and the Post Office where little ones can go and write their letter to Father Christmas, and post it through one of the special letter boxes. We could have spent far longer wandering around, exploring the Elf Village – it felt like such a magical little area. 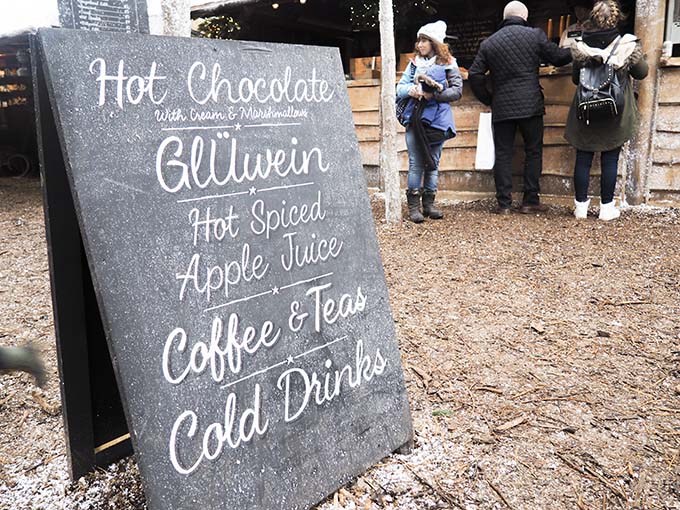 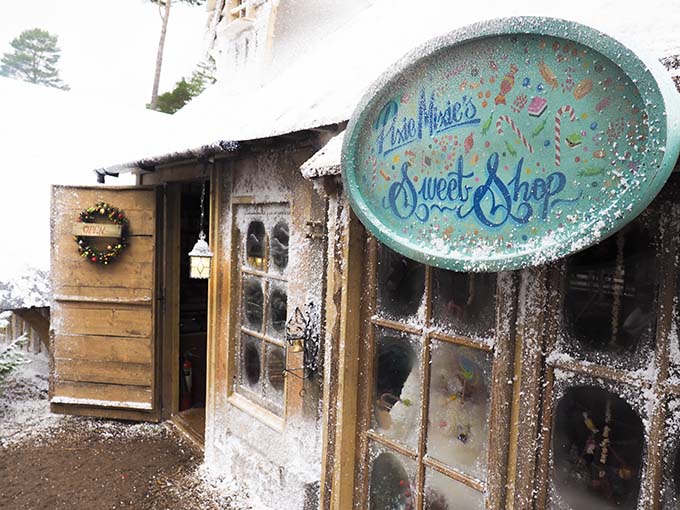 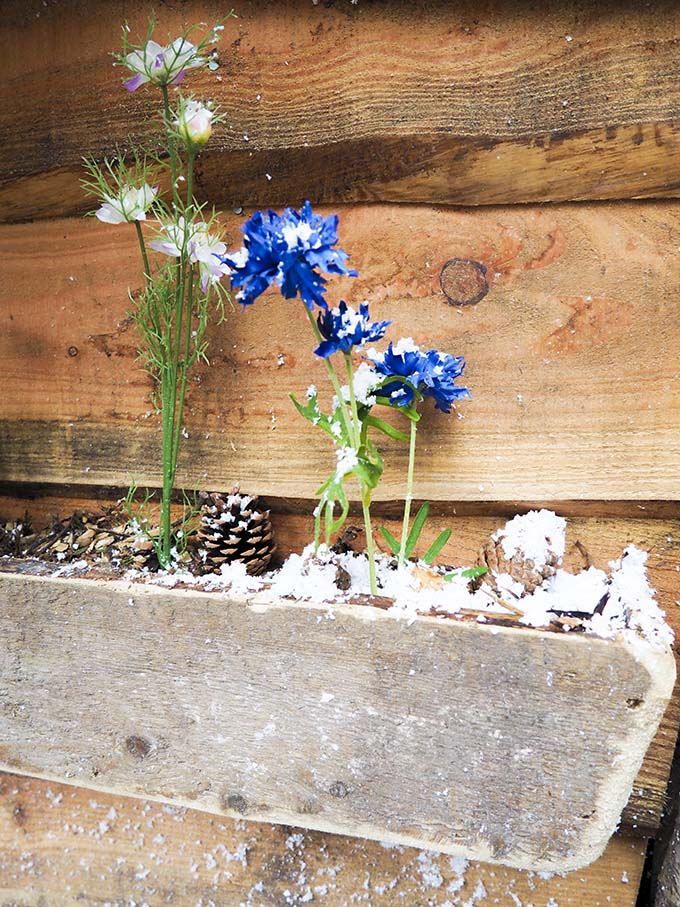 There’s also a restaurant there, selling fish finger sandwiches or chicken nuggets for kids and Christmas dinner, pie or meatballs for grown ups (all really tasty). Again, twinkly fairy lights and lanterns covered the ceiling and there was a real buzz of excitement as everyone ate. 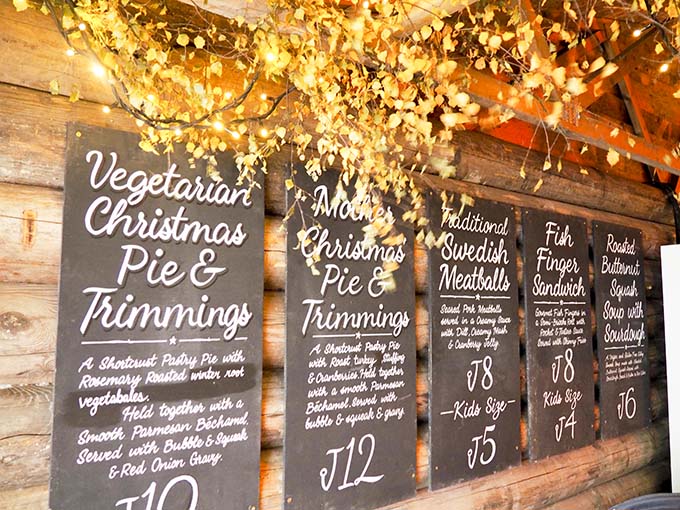 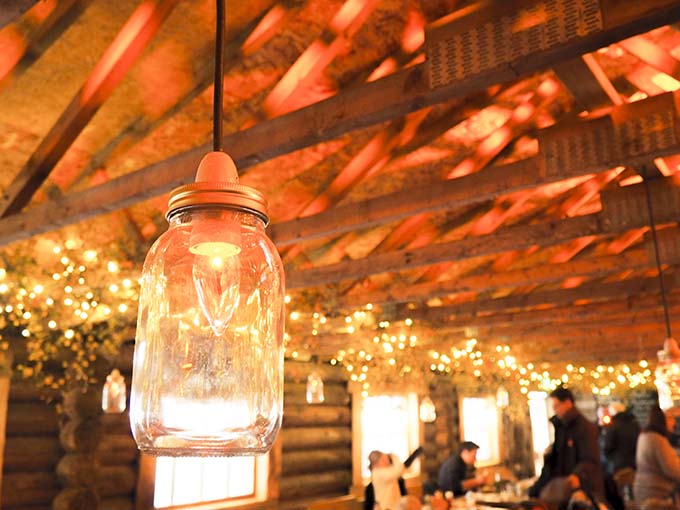 Finally, it was time for us to go and meet Father Christmas. An elf took us to another check-in area and when it was our turn, we were called outside and walked along some more snowy paths to Father Christmas’ house. We sat with him and he chatted to the five-year-old about what she’d been doing today, and checked to see if her name was on the good list (it was – phew!). He even knew about her going to street jazz dance classes (well, his elves keep an eye on all the children around the world, don’t they?) He was warm and friendly, and talked to her with his gentle Finnish accent. He gave the five-year-old an early present and then we posed for a few photos, before it was time to say goodbye.

All in all, Lapland UK was such a magical experience – amazing attention to detail, everyone was really friendly and going out of their way to make it special for the little ones, and it’s something we’ll all remember for a long time. 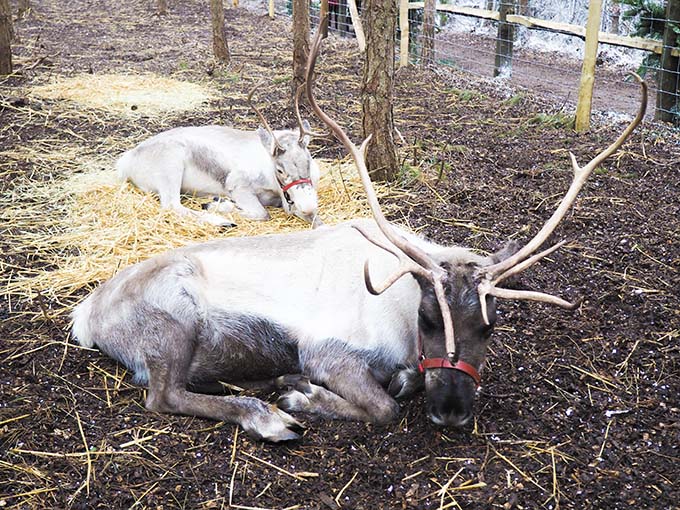 So is Lapland UK worth the money? We were incredibly lucky to be invited along to check it out, for the purpose of this review. If we’d bought tickets for the day that we went, at the end of November, it would have cost us £222 for our three tickets (£74 each, including a £4.50 booking fee per ticket). Parking is free and all activities are included – the toy making, biscuit decorating, ice skating and writing a letter to Father Christmas, and the gift from him too. While we were there, we spent £40 on food and £15 on one photo, taken with Father Christmas. So that would have been a total spend of £277.

To you, that might sound like a perfectly reasonable amount to spend on a special festive day out. To me, it felt too much. We were there for four hours – if it had been a full day experience, with perhaps a fairground and unlimited time to explore the Elf Village, then it might have felt worth the cost. But as it is, I am struggling with whether it’s value for money.

I’ve seen a couple of parents mention that it’s roughly the same price as top-price theatre tickets, which is a really fair point. So if you’re the kind of person who is happy to splash out, from time to time, on an activity which is utterly special and fantastic, then do it. Go. You will LOVE Lapland UK.

But I think it’s a shame that it’s as expensive as it is – if tickets was just a little bit lower in price (or if they charged top whack for the kids’ tickets and let grown ups come for £10 each) it would be more affordable to so many more families.

Have you been to Lapland UK? What did you think?

Thanks to Lapland UK for inviting us along to review the experience.