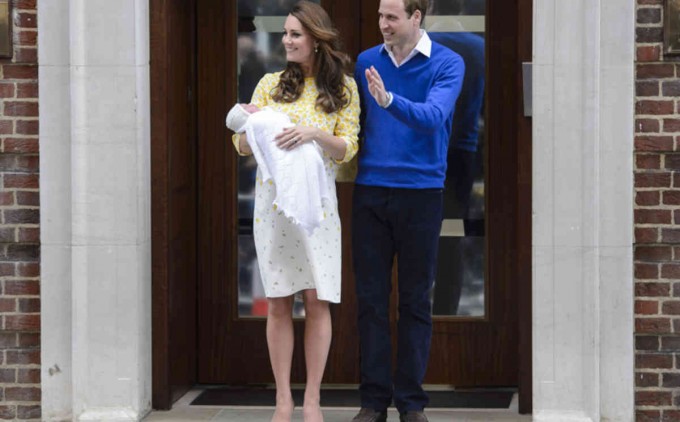 Before I go any further, let me say one thing: I’m a fan of Kate & Wills. Not in a hardcore-royalist way, but I like them. I think they seem like a decent couple and they appear to be doing well, finding their way in what must be a strange hybrid of honouring tradition in a modern world.

When it was announced that Kate was in labour and had been admitted to St Mary’s Hospital, I confess, I got a bit excited. I have no idea why! Millions of women give birth every day, so why is this one different? But there’s something about a new prince or princess being born that is exciting. News correspondents reported that it might be hours before the baby was born (on hearing this, did anyone else think: ‘Nah, this is her second baby – it’ll be here quicker than you think!’… and she was.)

At 8:34am, the Duchess of Cambridge gave birth to a healthy baby girl.

At 6.12pm – less than 10 hours later, Kate and William appeared on the front step of the Lindo Wing with their new baby. Kate wore a yellow and white Jenny Packham dress, nude heels, her brown hair was curled and tumbling on her shoulders, dewy glowing make up looking perfect.

I’m guessing she had a team of people head into the hospital to glam her up, for her exit – a hair stylist, a make up artist and possibly an assistant who could help her into her beautiful dress. It’s royal tradition that the couple appear outside the hospital with the new baby, for the world’s press to see and photograph, and on one hand, I totally understand Kate wanting to look her best.

But on the other hand… do you think she said William, inside that hospital: “Oh William, do we HAVE to? Can’t we just sneak out the back?”

Because, ten hours after giving birth, I still felt like I’d been hit by a bus. I didn’t know what day it was and the surge in hormones meant I wanted to laugh and sob at the same time. Like every new mum, there was a lot of bleeding as my body got rid of the lining of my womb and thanks to the stitches, walking hurt a bit and I was scared to go to the loo. If you’d asked me to shower, pop on a pastel frock, heels and have my hair and make up done, I would have cried into my (unwanted) Bounty pack.

A pastel frock – a designer pastel frock no less. Imagine leaking blood all over that. Yes, it’s a gross thought, but let’s be honest, it’s the reality that every mum goes through after she’s given birth. Maxi pads are our friend. I think I used two at a time, for the first few days.

I do wonder whether Kate just takes her royal duties on with a smile, or whether she has a private cry sometimes, and then faces the press with a big smile on her face. And of course, it’s not just Kate who’s affected by these royal traditions – it actually has a subconscious effect on every pregnant woman who sees the photos. Chances are, many of them will think that it’s totally normal (expected, even) to snap back to normal, on the day they give birth. So will they feel like a failure when they’re heading home from hospital, greasy-haired, pale and hobbling slightly as their stitches smart a little?

To be fair to Kate, I don’t blame her for sprucing herself up, when the world’s media is waiting for her outside the hospital. But wouldn’t it have been refreshing if she’d ignored what was expected of her and actually thought about what she wanted? Wouldn’t it have been brilliant if she’d scraped her hair into a top knot, dabbed some powder on her tired shiny face and worn tracksuit bottoms for her hospital exit?