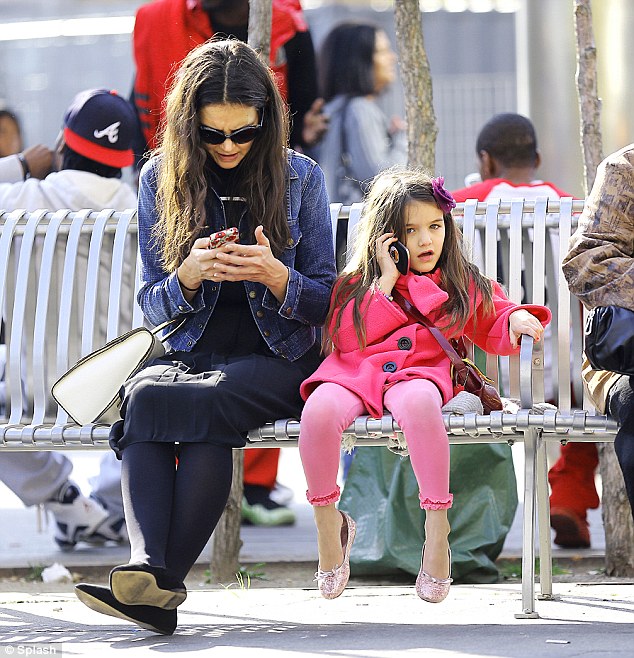 This photo of Katie Holmes and Suri Cruise on their mobile phones caused a minor stir last week. No, not because Suri is wearing next season’s hottest colour, as seen on the S/S13 Stella McCartney catwalks*.  As they sit in New York’s Battery Park, Katie is engrossed in her iPhone while six-year-old Suri chats away on a BlackBerry. Lots of people were shocked by the image, but like it or not, we’re all plugged in to technology, making plans, working and socialising on our smart phones.

From as young as five months old, my daughter was playing with iPhone apps and now at 25 months old, she asks for the iPad each morning (while her parents are still bleary eyed and waking up), switches it on, unlocks it by swiping the panel, finds the BBC iPlayer app, and chooses from her favourite programmes (Tilly And Friends is a current top choice). What I’ve just describes fills me equally with pride and horror. Pride that she is intelligent and has learned how to navigate the device. Horror because we really don’t have any clue how this generation of kids will be affected by such immersion in tech, at such a young age. I’m hoping they’ll all go onto ace their exams and get a tech-driven job that hasn’t even been invented yet. In America, the Department of Labor reckons 65% of children will do exactly this, as this geeky infographic spotted on Living With Kids, shows.

I personally spend way (way) too much time using my iPhone. On an average day, I switch it on within ten minutes of waking up and before I even get out of bed, I’ll have checked (in this order) my emails, Facebook, Twitter and Instagram. On my train journey to work, I switch between those four apps and sometimes draft a blog on my WordPress app. On car journeys I compile a grocery shop on my Tesco app (when I’m the passenger obvs, I’m not veering into parked cars while I pop a pack of Babybels in my basket). While watching The X Factor or The Great British Bake Off, I’m glued to Twitter, keeping track of the social conversation. It’s got to the point where I have to actively put my phone out of reach when I’m watching a movie, otherwise I’ll lose track of what the heck is happening in the plot. This very thing happened two nights ago:

In this week’s issue of LOOK magazine, Cherry Healey is challenged to give up all social media for a weekend – the feature idea was concocted after many a discussion in the office talking about our dependence on social media. And while I don’t think I need to do anything that extreme (just the thought of it brings me out in a cold sweat – hang on, have I just proved that it is needed? Pretend I didn’t say that), I do want to change my habits and have a healthier balance between living real life and being involved in other people’s virtual lives.

My 5 step plan to creating a better balance

*I may have made this up. I wasn’t at Stella’s Paris runway show but I’m pretty sure hot pink didn’t feature.

Image of Katie Holmes and Suri Cruise from MailOnline.