I can hardly believe I’m typing this but… we recently went on a camping trip. With an actual tent. That we erected ourselves. Yep, we’ve made a swift progression from being non-campers to being hesitant glampers and now we have official CAMPER status.

OK so I should probably hold my horses – I’m not exactly about to rob Ray Mears of his survival crown – but this felt like a big deal!

We spent a night under canvas at a lovely campsite in the New Forest (are modern tents even made from canvas? Spending a night under polyester doesn’t have quite the same ring to it, does it?) We packed up the car, threw in the tent we’d borrowed from our friends, and off we went! 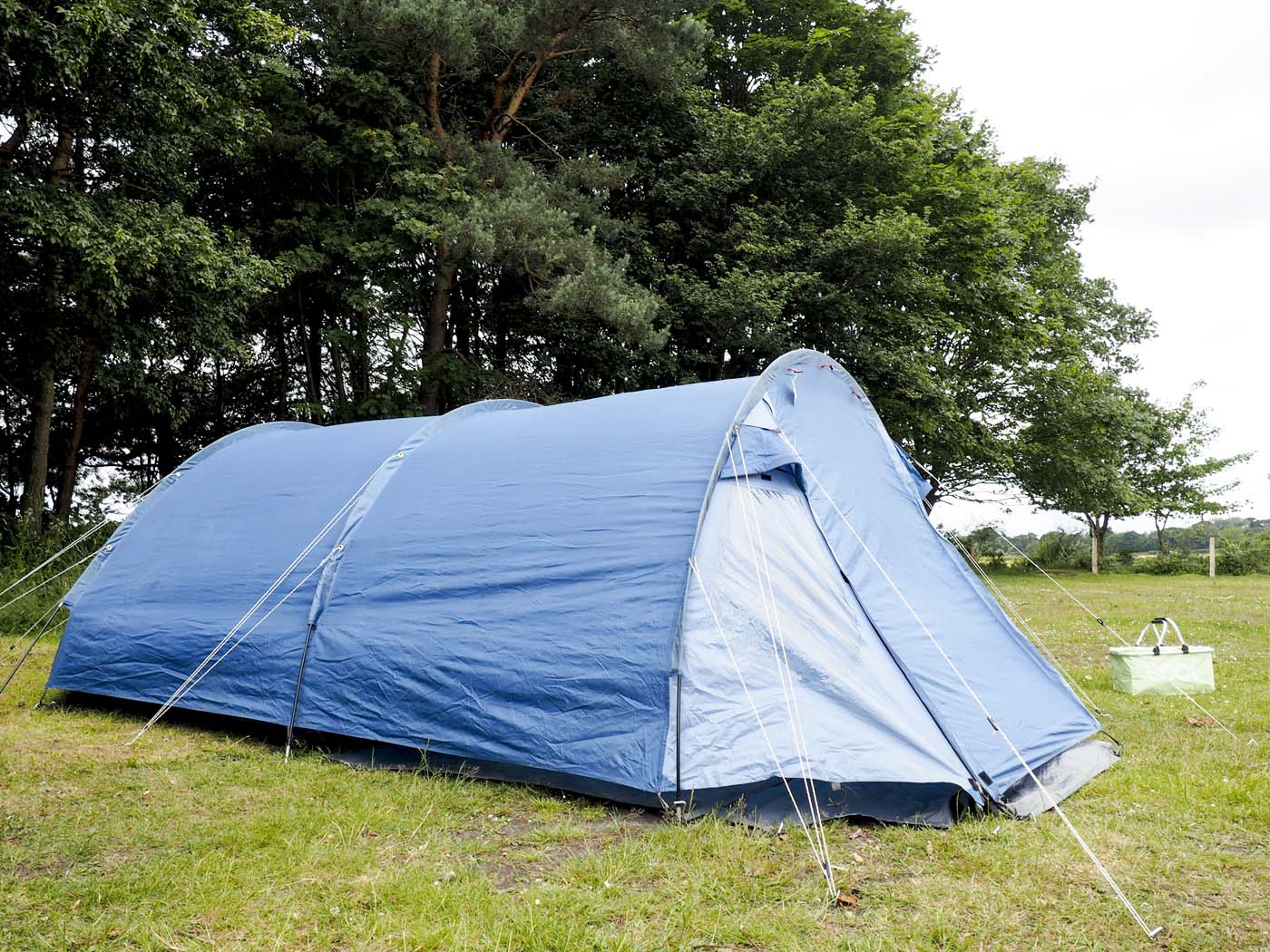 The campsite – one of Camping In The Forest’s 16 caravan and camping sites – was in Holmsley near Christchurch and as we arrived, it was immediately clear that this place was special. Turning off the main road, towards the campsite, we came across six or seven wild ponies on the road. We carefully and slowly navigated the car around them – which is just as well because we later learned that the New Forest wild ponies have got right of way over vehicles.

The beauty of Camping In The Forest sites is that they’re all set amongst the woodlands of the Forestry Commission. You can pitch your tent anywhere you like, rather than having a regimented ‘pitch’ area, so you can have direct access to beautiful forests. As well as being surrounded by nature, we quickly discovered that the Holmsley site has a brilliant shop, selling all the basics and hot food too in case you don’t fancy getting the camping stove out. 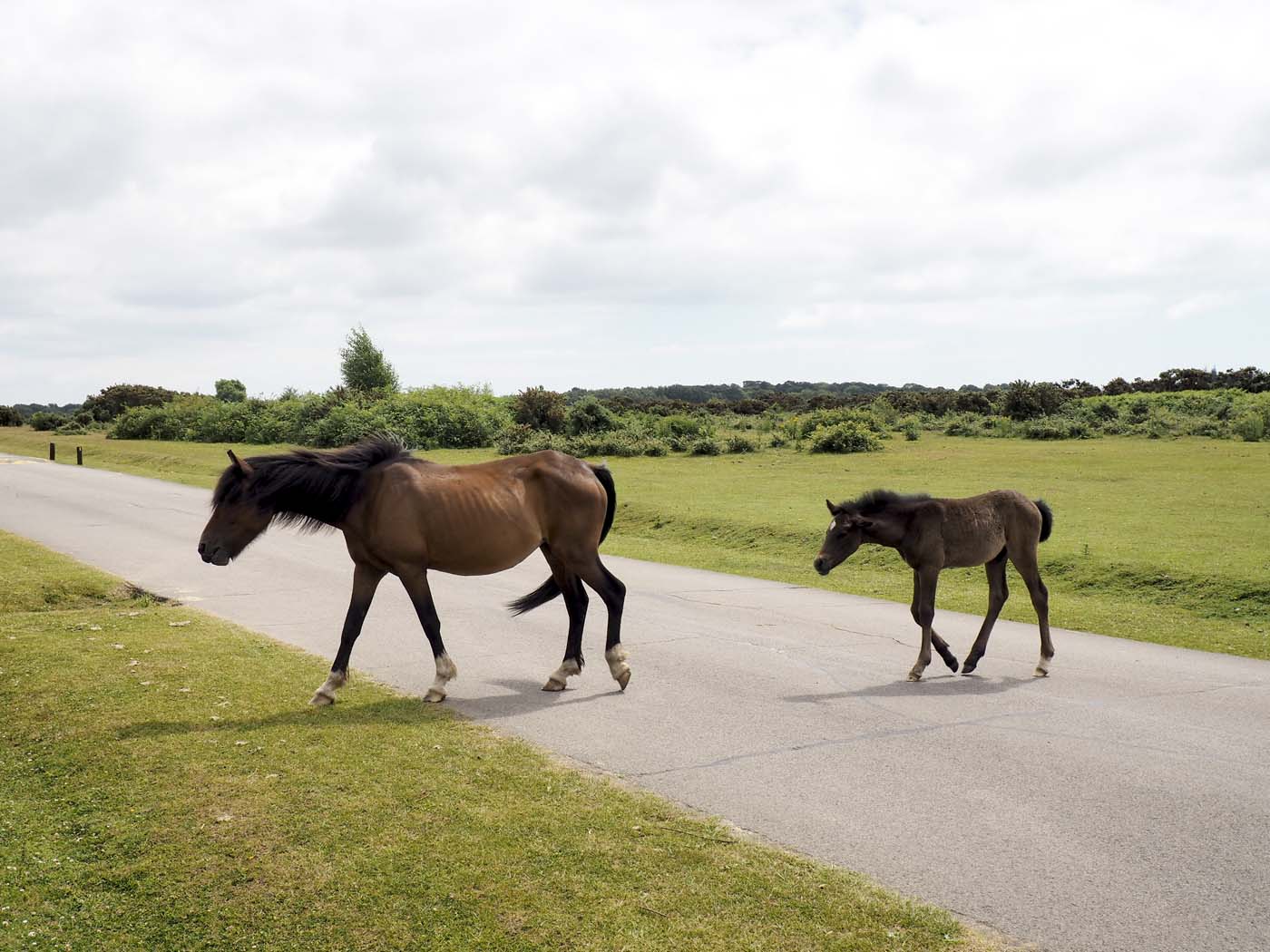 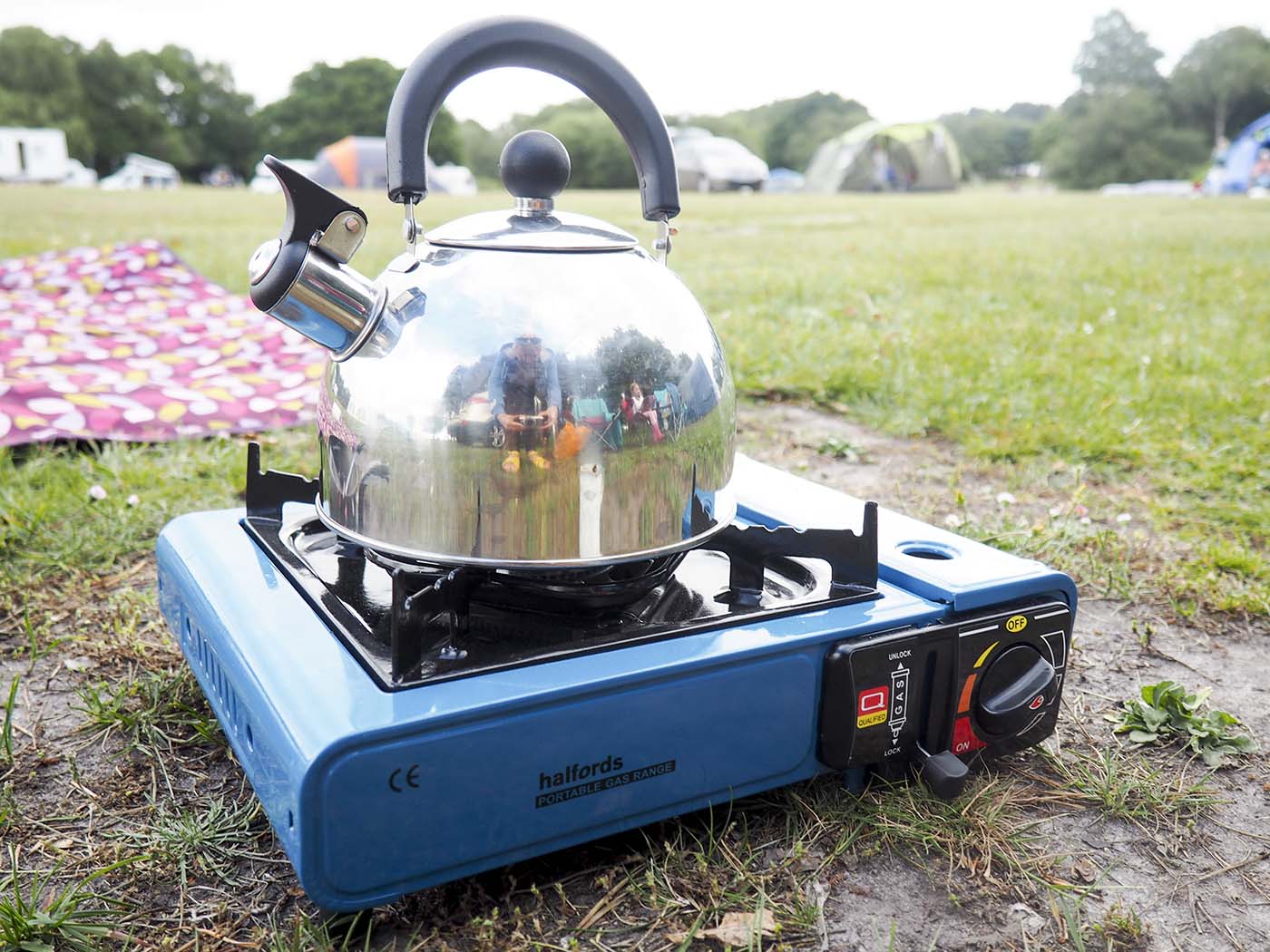 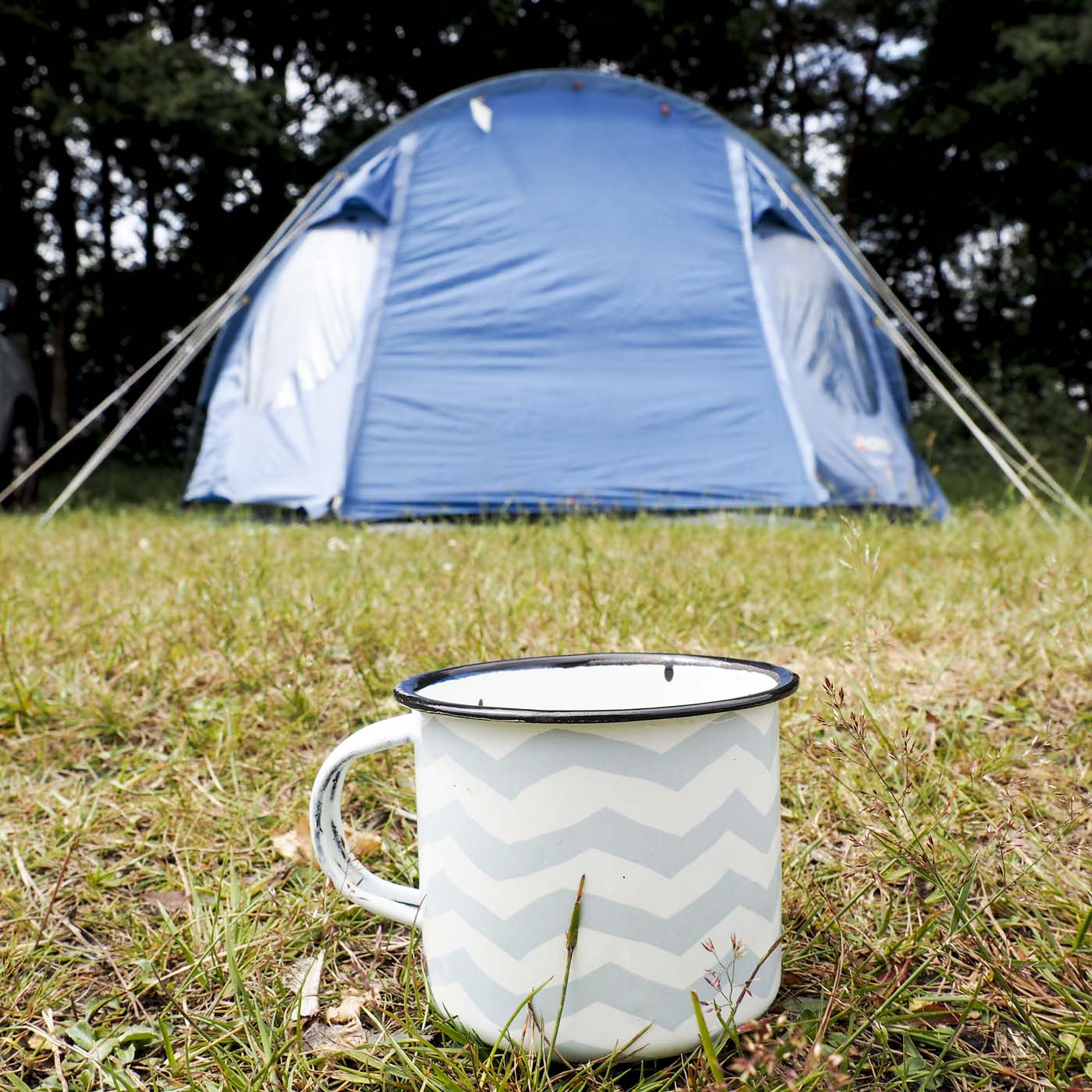 Our trip to the New Forest had a very special purpose: whilst there, we were to ‘unleash our inner child’. New research conducted by Camping In The Forest found that parents in the UK miss the simple pleasures of childhood – think climbing trees, playing hide and seek, and riding a BMX – and that eight is the age that most of us would like to go back to.

Since we didn’t have a Tardis handy for some time travel, the next best thing was a weekend dedicated to returning to a fun and carefree way of life – pitching a tent, doing nature trails, doing a BBQ, watching the sun set and snuggling down in the tent with a fairytale before bed.

According to psychologist Hilda Burke, eight is viewed by many as our happiest age because it was a time when we were more open to new experiences. “(It’s) because (at age 8) we haven’t fenced ourselves in yet according to our perceptions of who or what we are. This makes life a lot more exciting! I often do an exercise with my clients where I encourage them to write themselves a letter of advice from their 8 year old selves – this tends to tap into a freer version of them, a more open spontaneous self.”

Helping us on this mission to get in touch with our eight-year-old selves was none other than wildlife expert Chris Packham. Chris, we soon learned, is a walking, talking encyclopaedia of nature knowledge. As soon as he arrived at the campsite, he became surrounded by children who all took turns in firing questions at him. Amazingly, Chris was able to offer up interesting facts and figures about every single creature and plant  that the kids quizzed him on. It was incredible to watch! 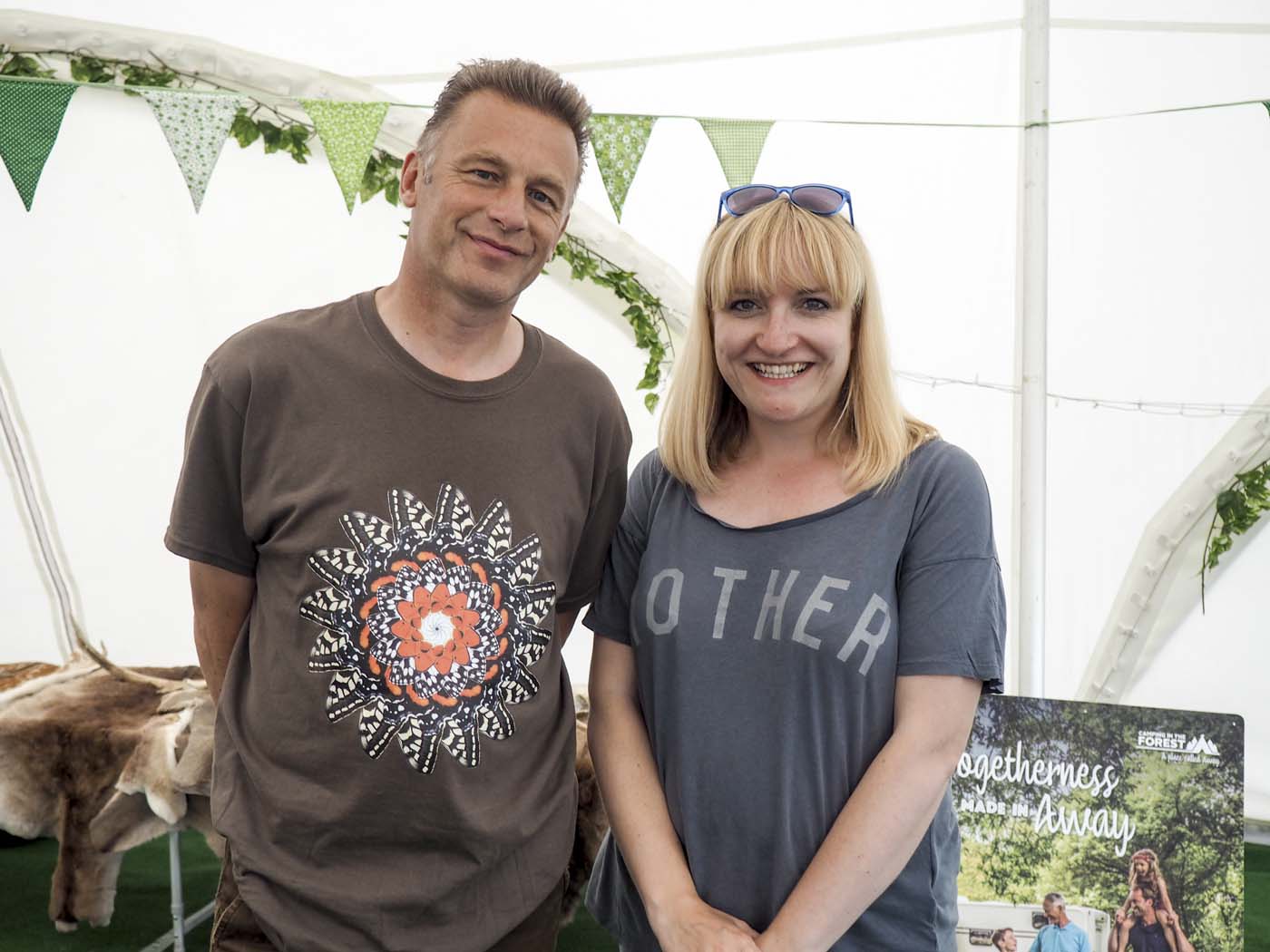 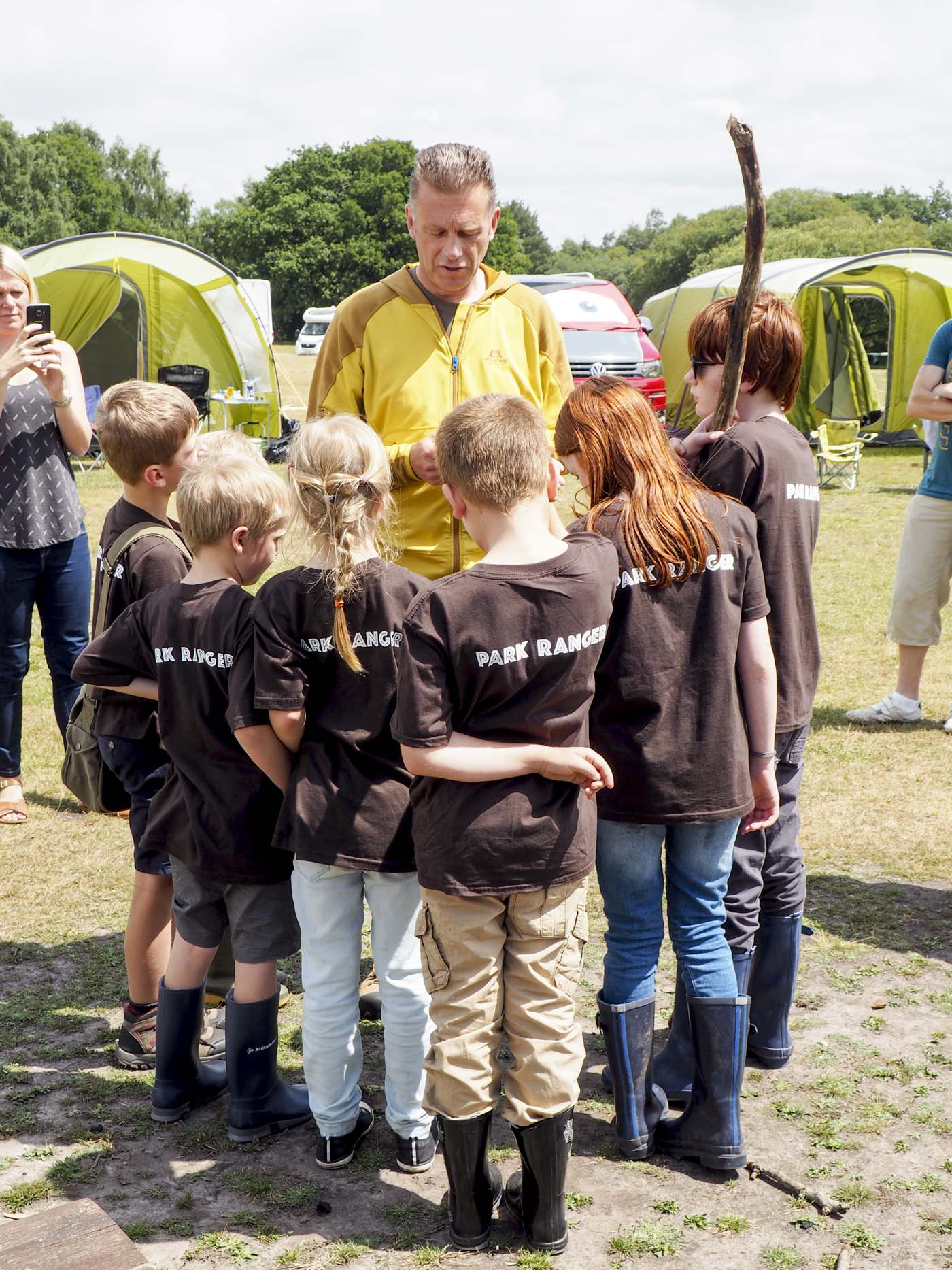 As well as Chris, we were joined by two of the New Forest Park Rangers who took us into the forest and showed us what it takes to be a park ranger – the kids were even given t-shirts to help them get into the role. Next, it was time for Chris Packham’s interactive nature quiz where we had to head out into the forest and find a beetle, draw wood markings from the trees, make a crown from twigs and flowers, and answer some tricky questions. 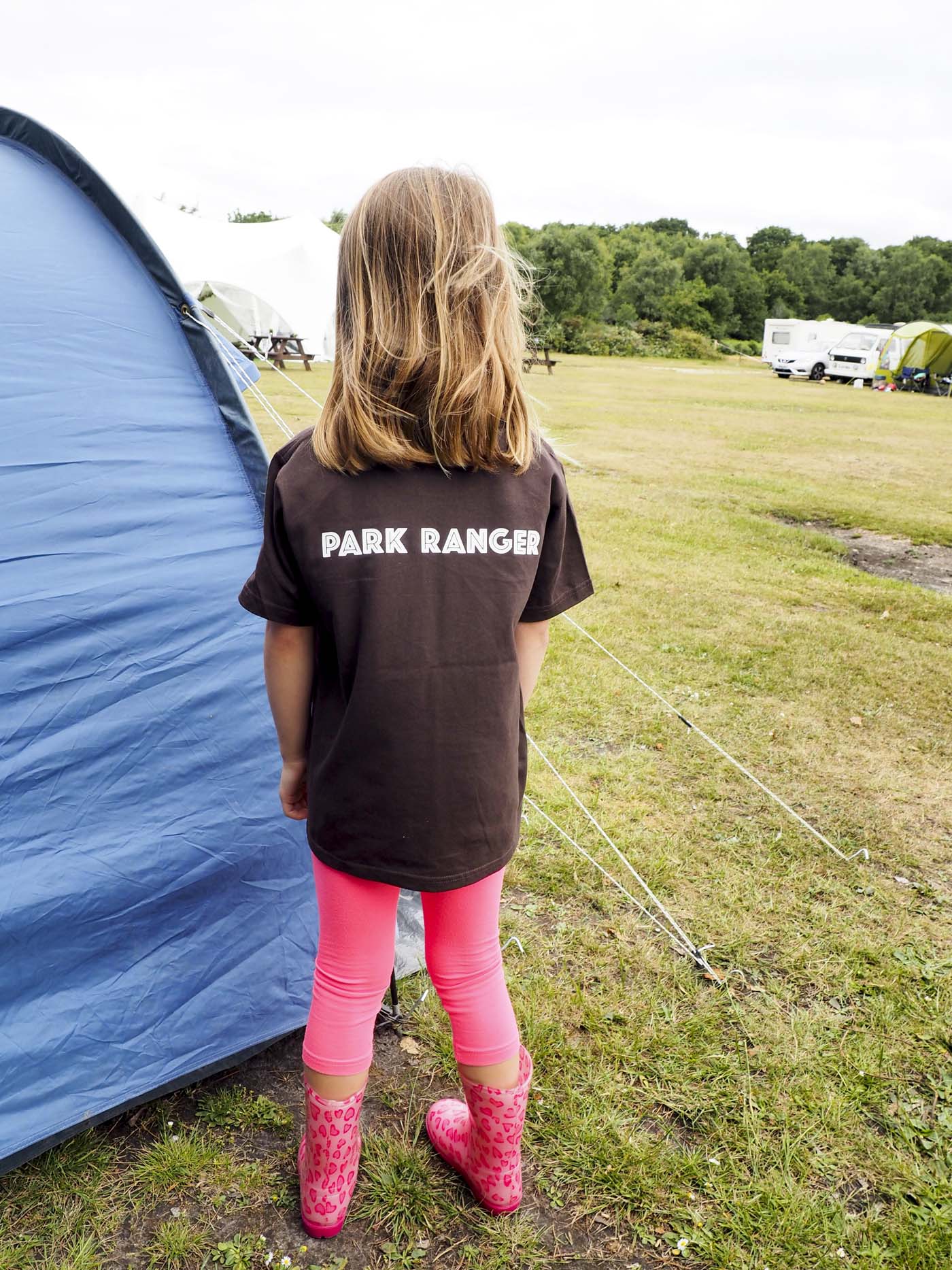 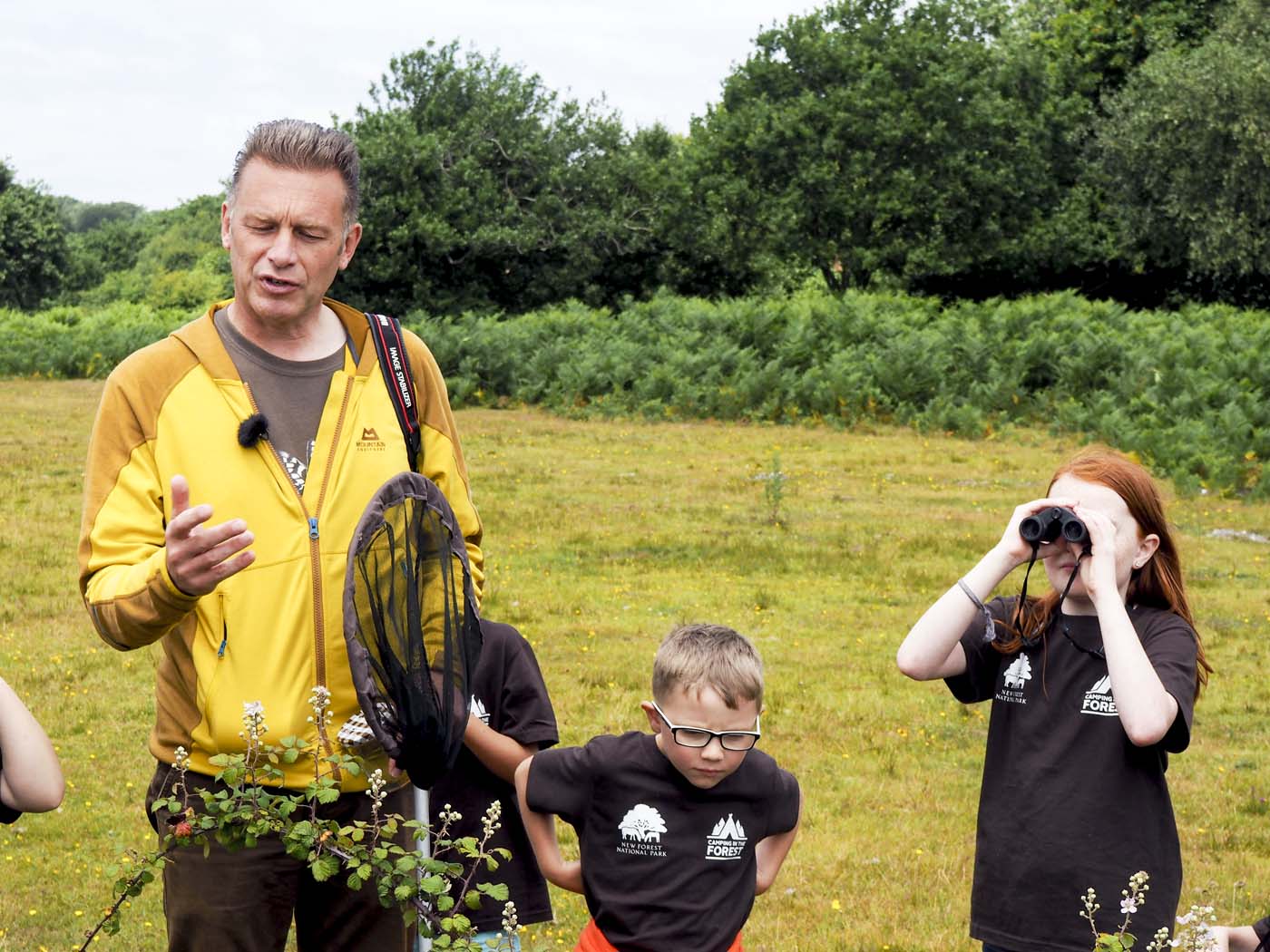 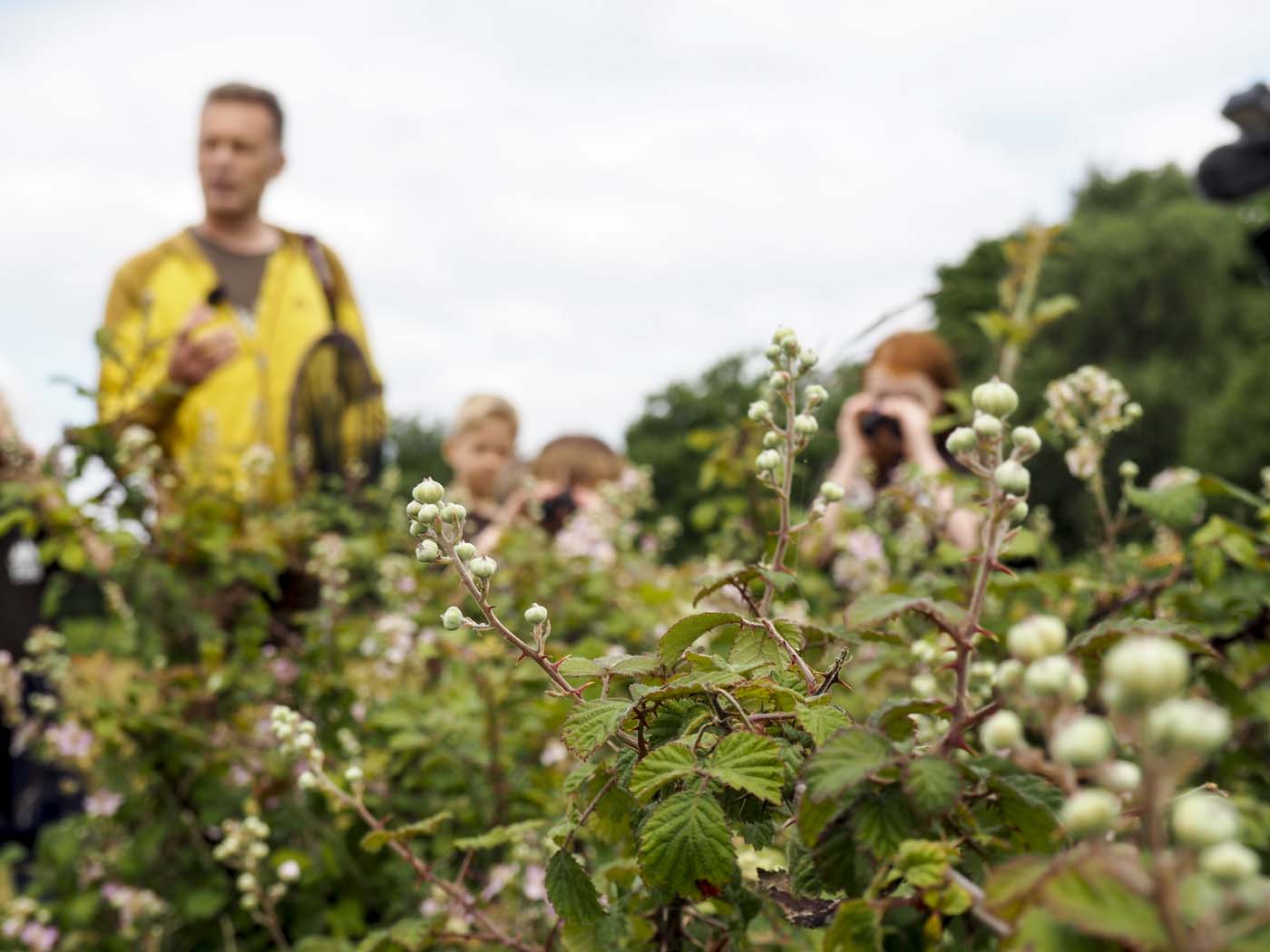 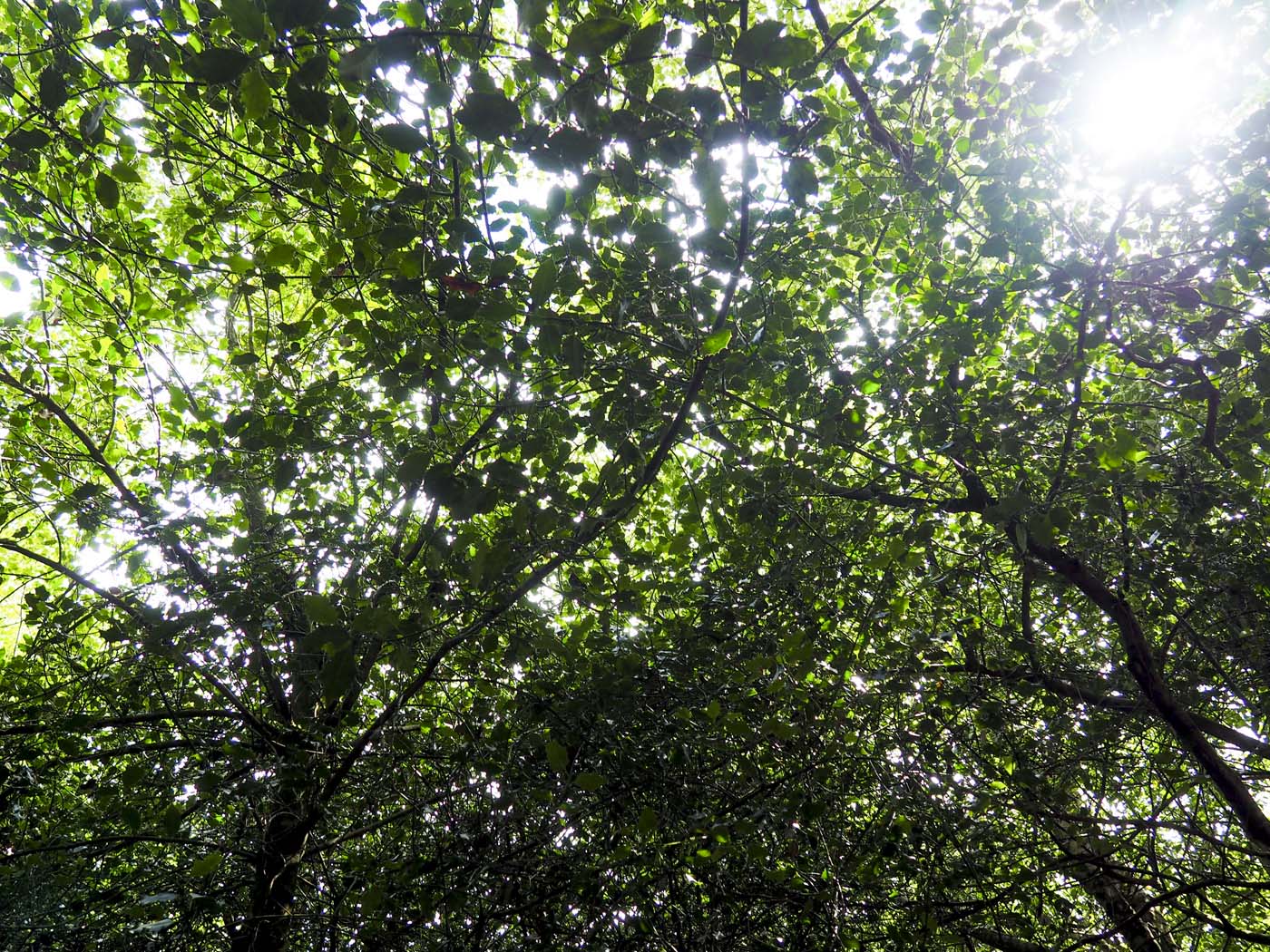 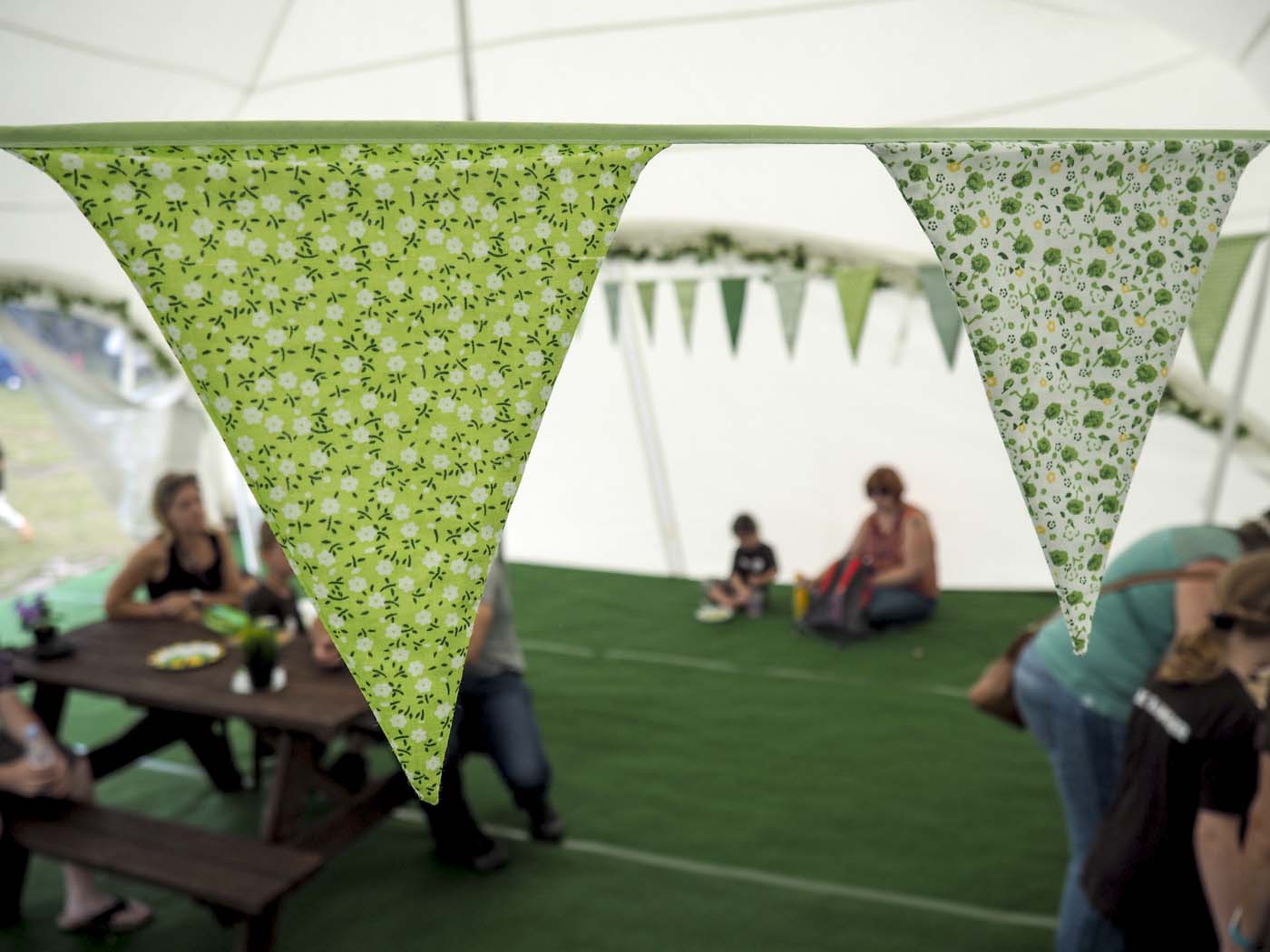 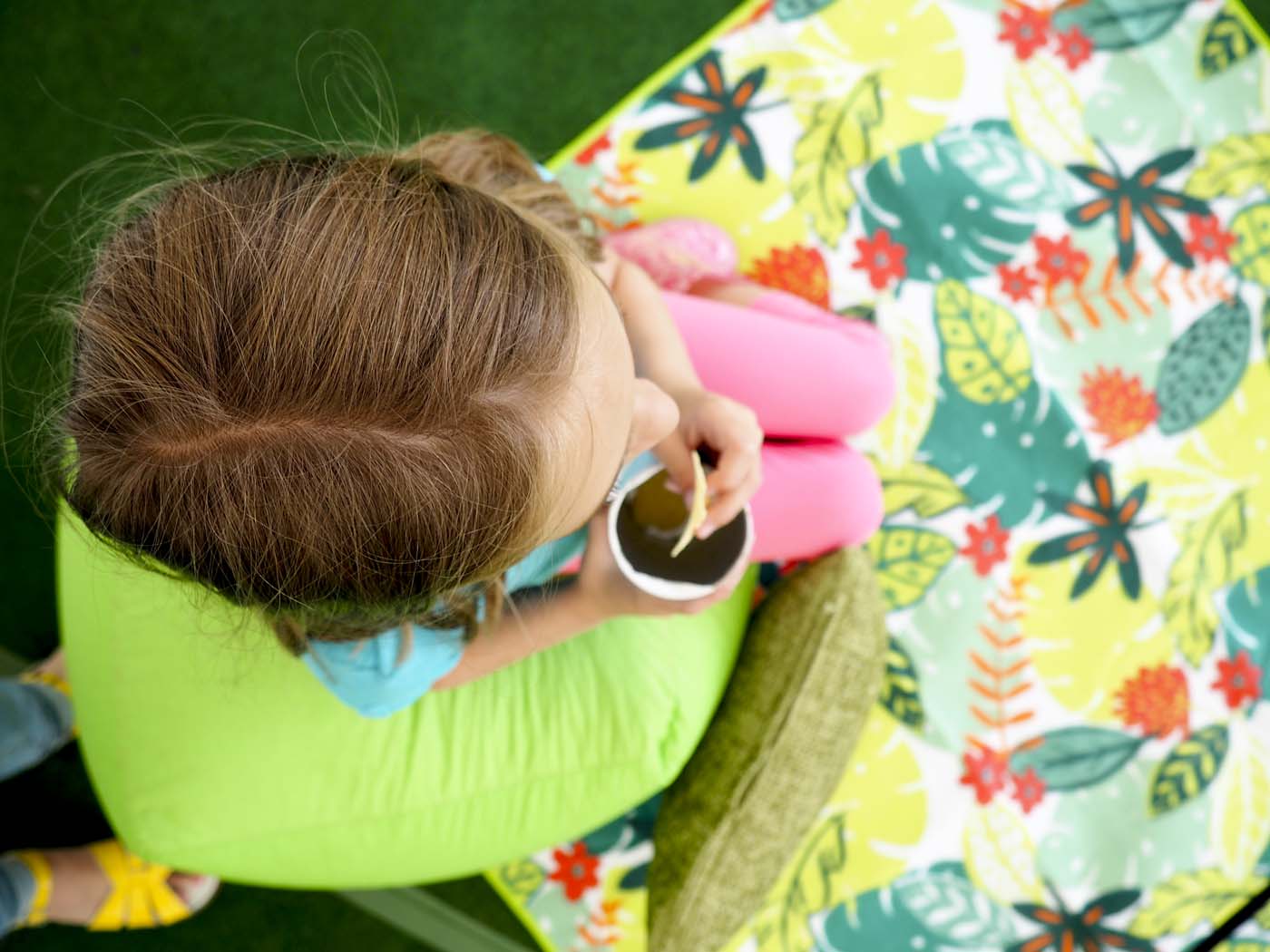 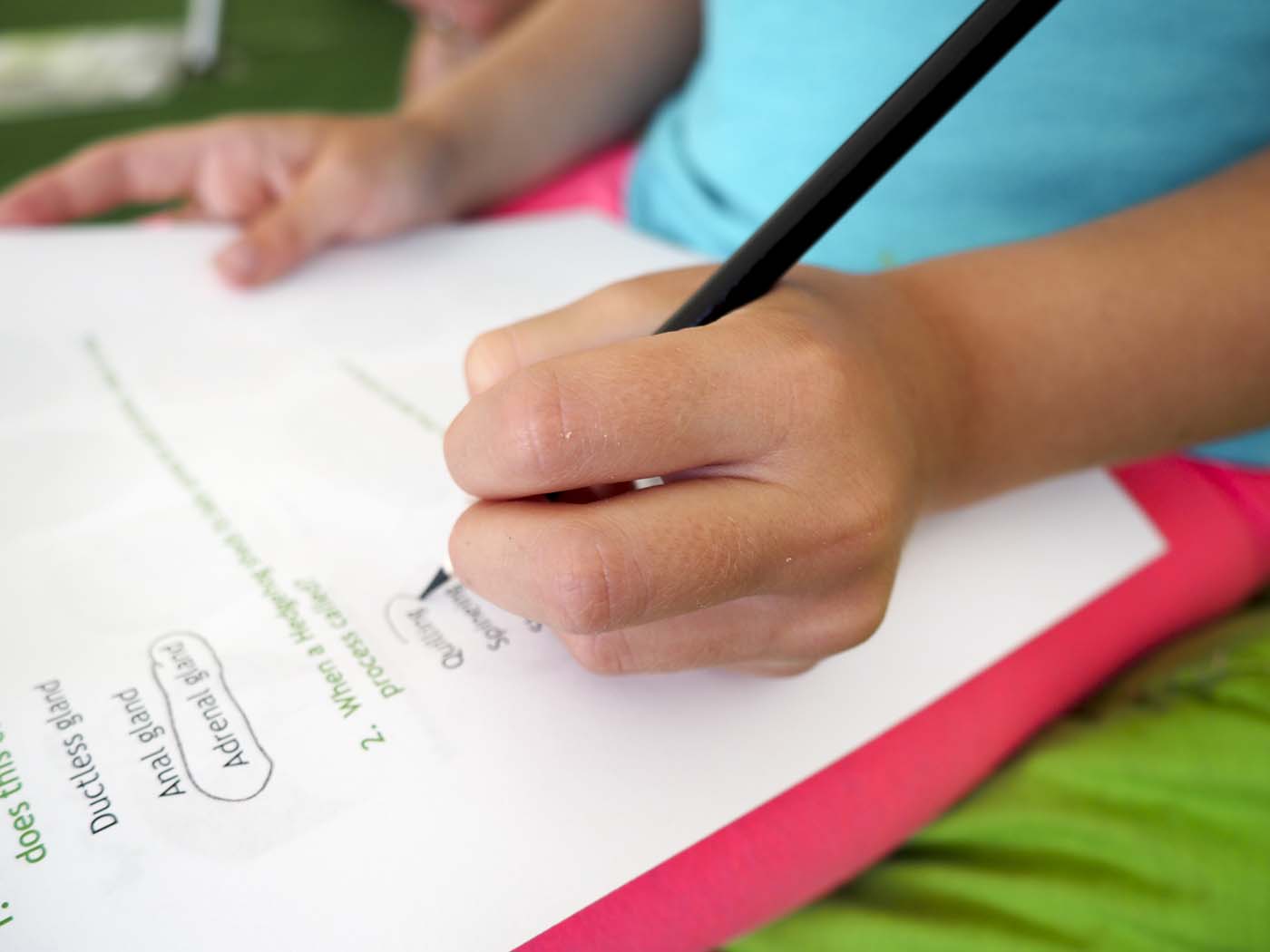 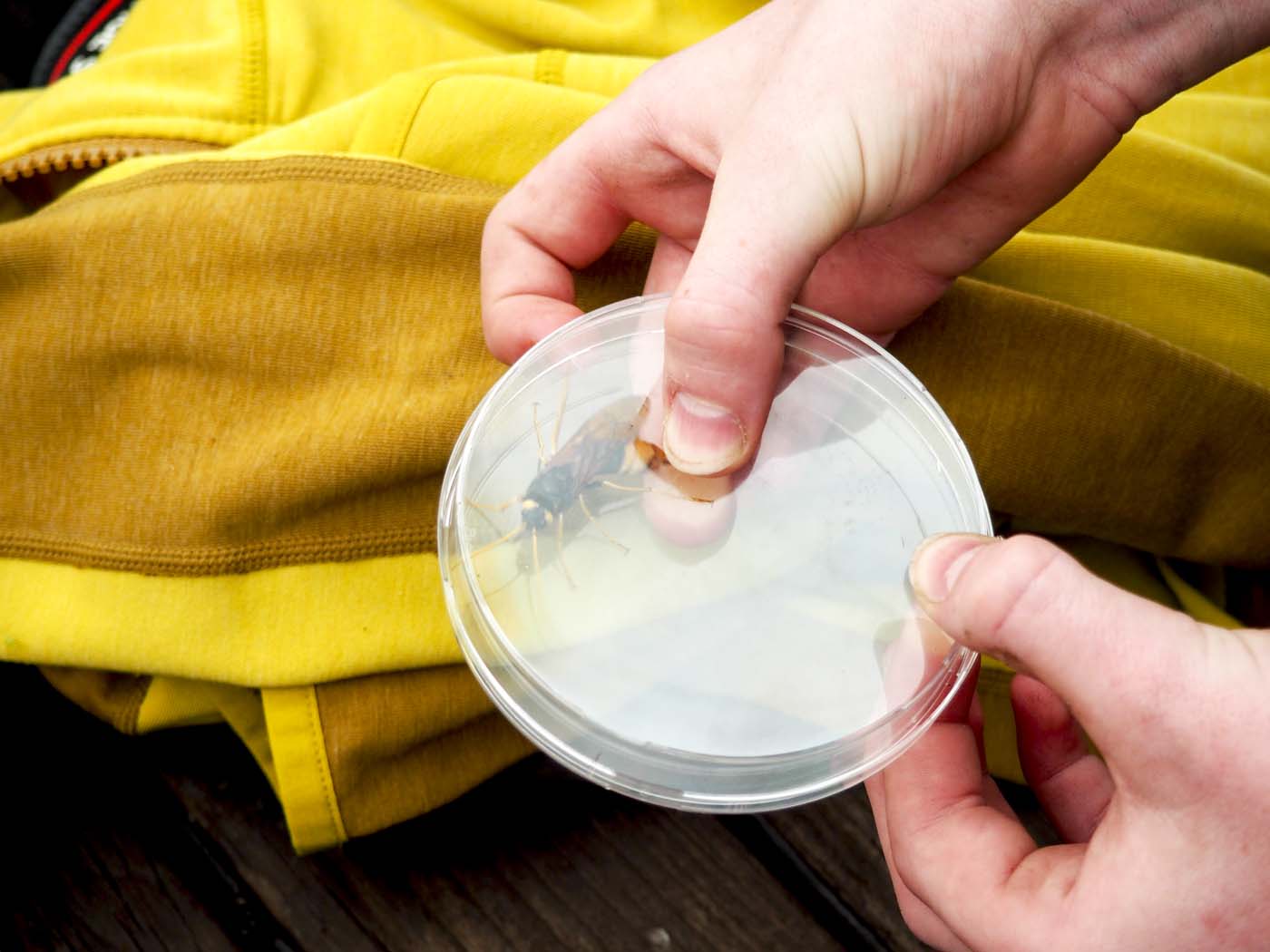 It was such a fab way to get the kids really involved and engaged with nature – even the six-year-old, who could easily take or leave a trip to the zoo, loved it. Brilliantly, the New Forest Park Rangers do lots of family activity sessions and dusk walks at Camping In The Forest sites throughout the summer, so anyone who’s staying at one of the campsites can get involved too. 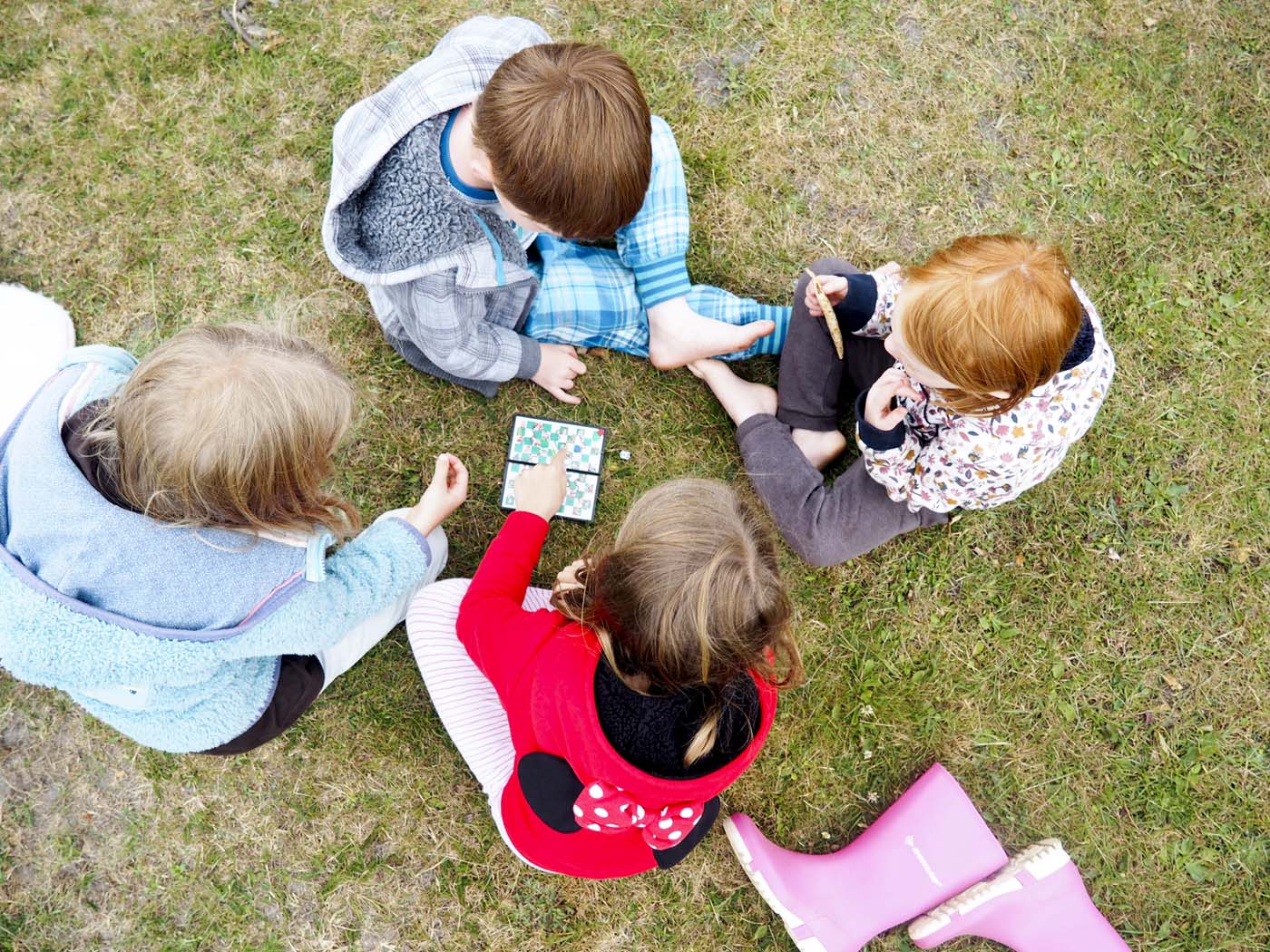 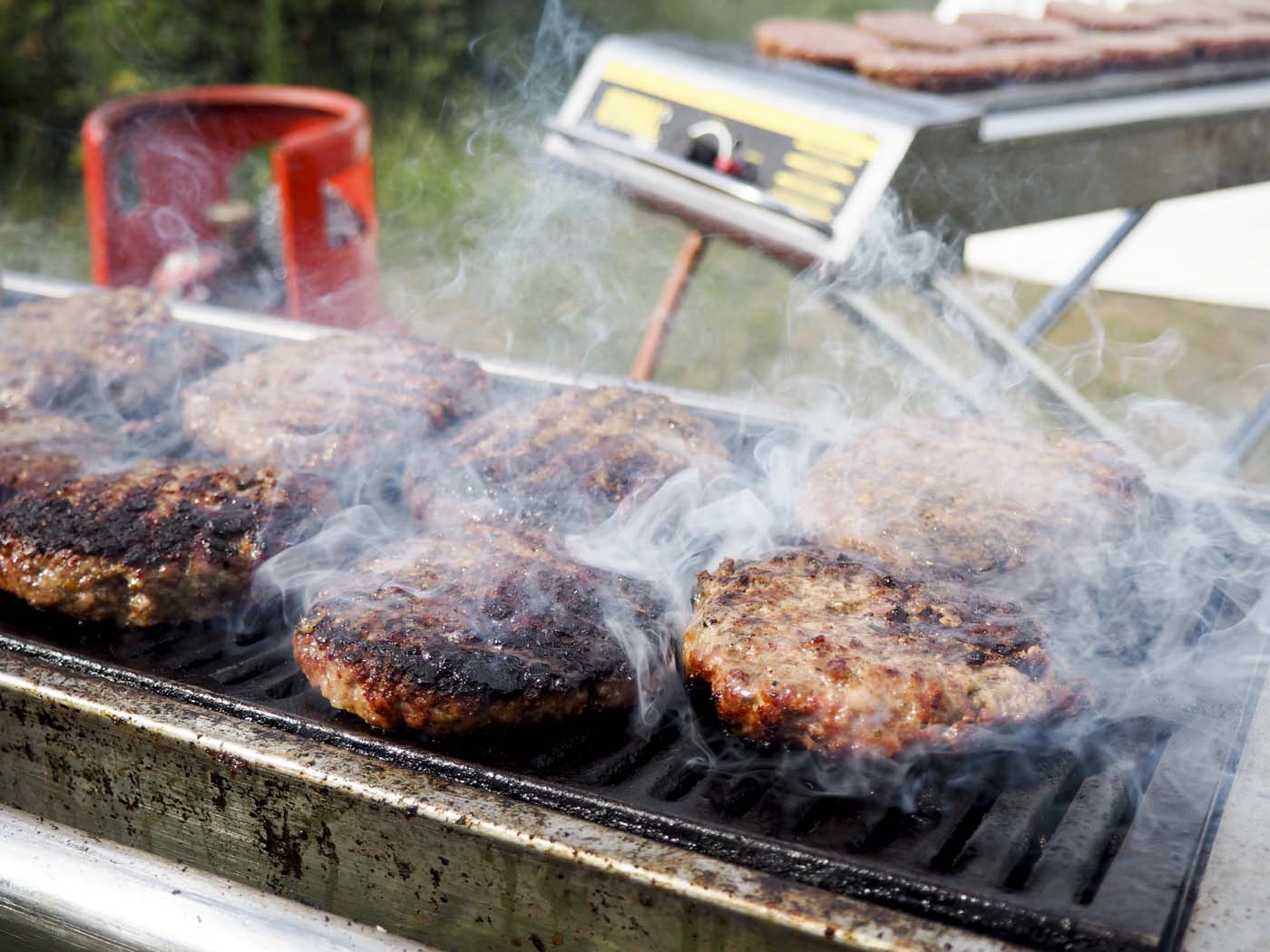 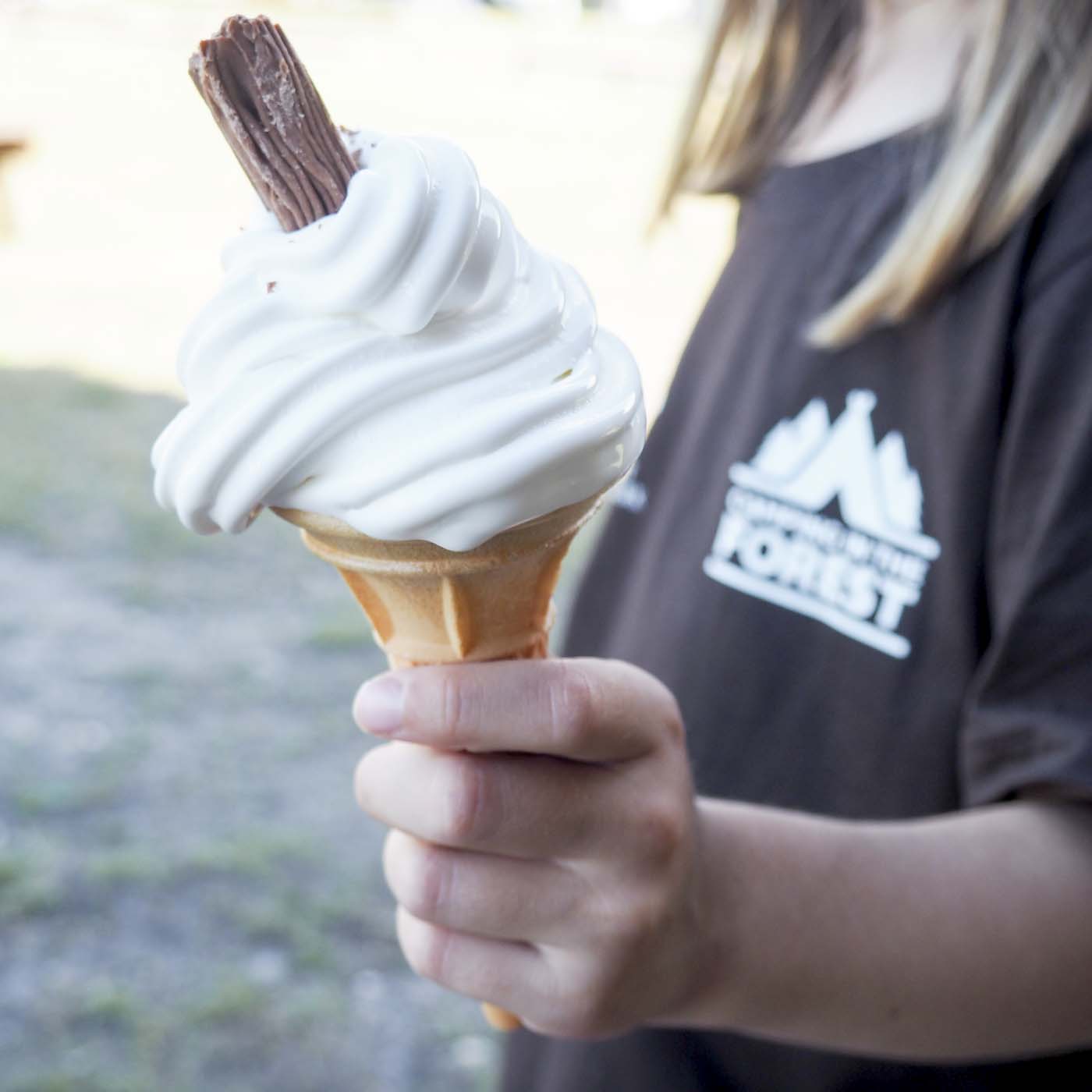 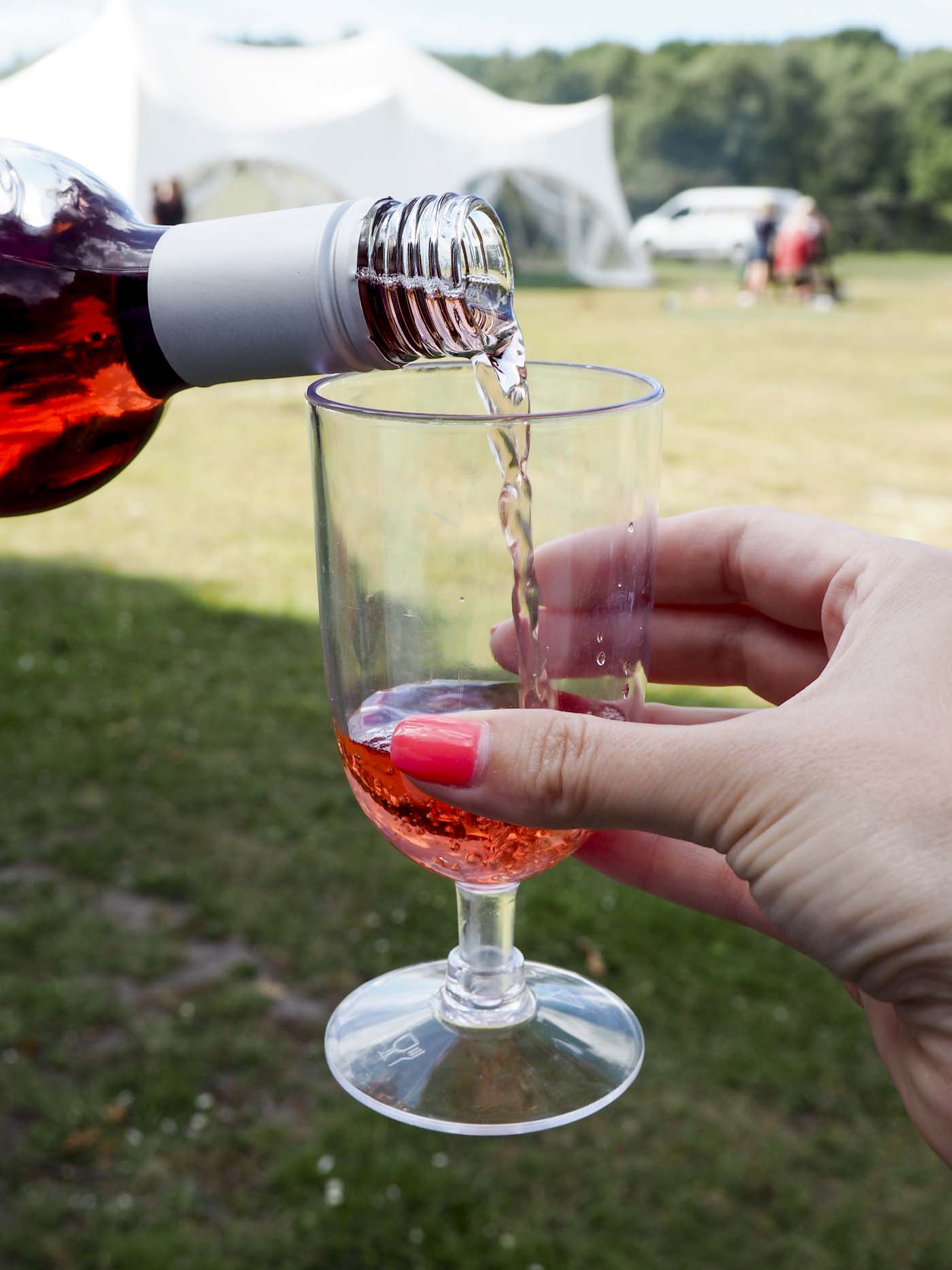 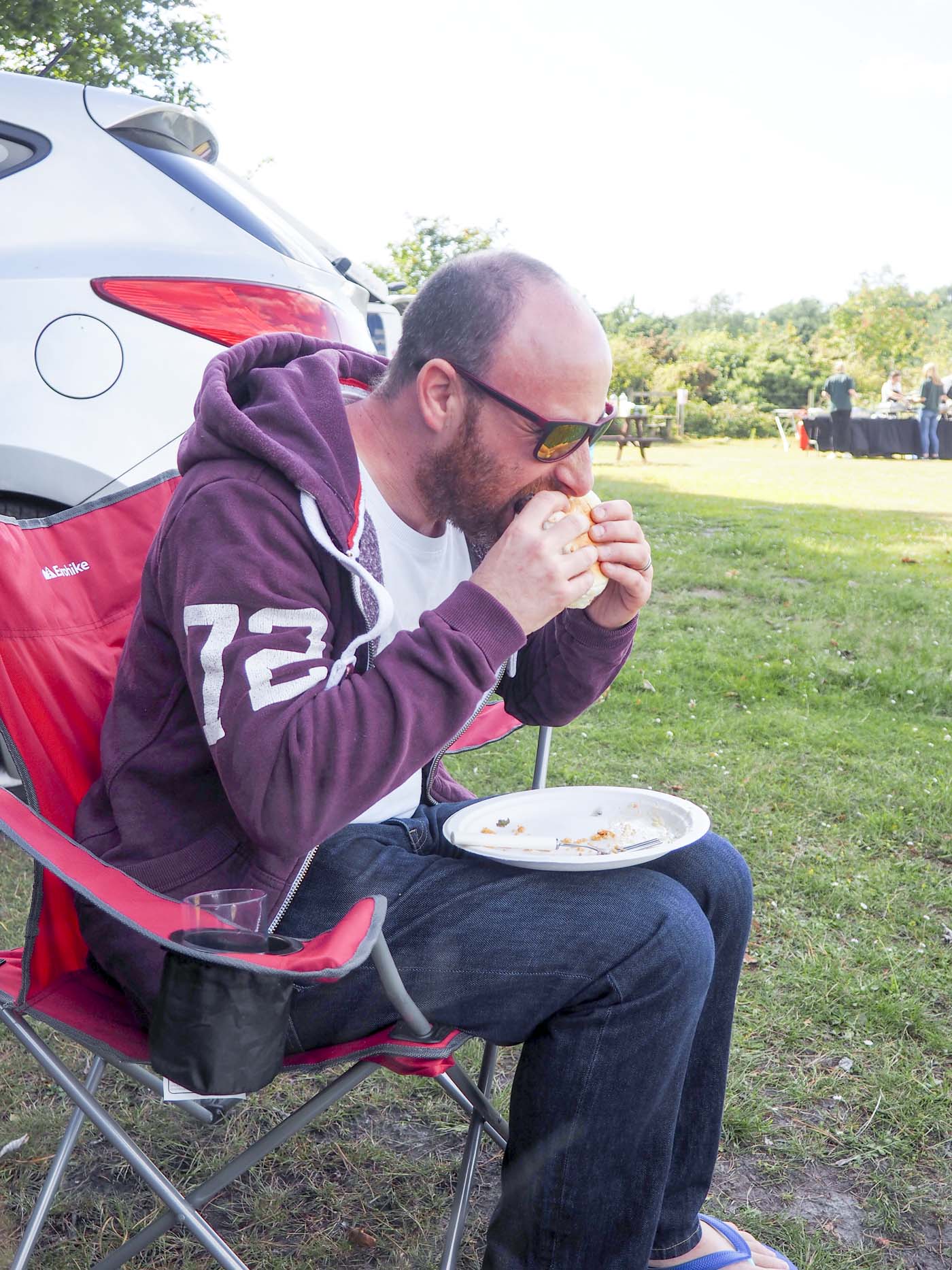 After burgers and ice cream, it was time to tuck the six-year-old up in the tent. We all laid down on our airbed and I read her a story about the New Forest ponies. Soon, she was falling asleep – and the gentle snores coming from Mr P told me that he had too! (I suspect the sun and large glass of wine he’d had may have contributed….) 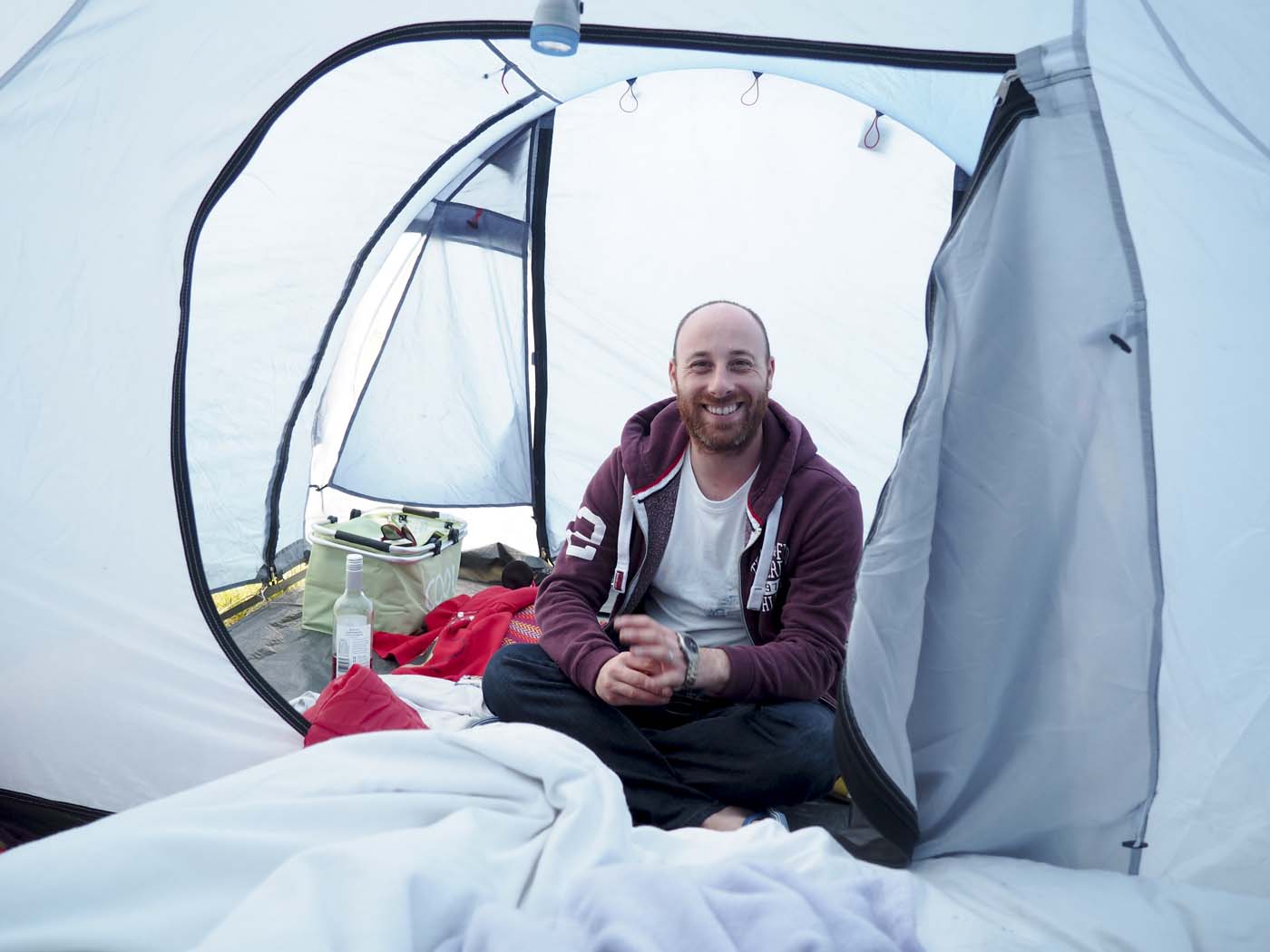 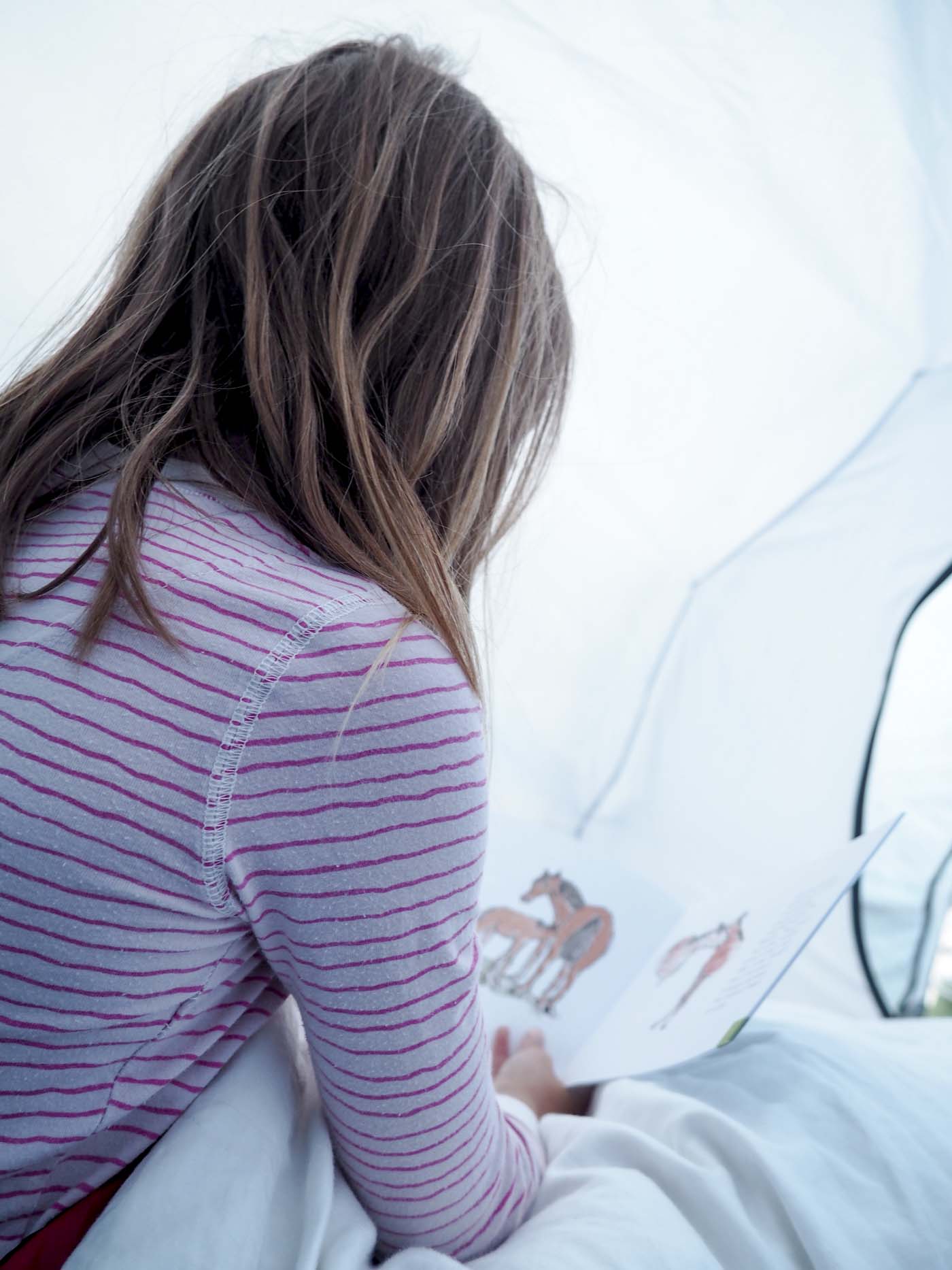 The next morning, we woke early (isn’t that always the way, when you’re in a tent?) and made ourselves cups of tea. It felt so peaceful, sitting there, cuppa in hand, listening to the sounds of the forest. We got bacon rolls from the campsite shop for breakfast before cracking on with taking the tent down and attempting to fold it up small enough to fit back into the bag.

So we survived our first ever actual camping (not glamping) trip! And we loved it. But did we succeed in getting in touch with our inner-eight-year-old? I think we gave it a good shot! And we’ve already made plans to buy ourselves a family tent and head off on another camping trip… so watch this space.

Thanks to Camping In The Forest who invited us to stay at their Holmsley site for the night and commissioned this post on our stay. As always, all views are my own and for more information on how I work with brands, see my Work With Me page.