That mascara isn’t as pants as you think it is – you just need to take off last night’s mascara before reapplying. In fact, your lashes and eyes like it much better if you remove your eye make up every night rather than just sleeping in it, waking like a grubby, smudged panda.

A quiet life is better than constant drama. Who cares if that person is living their life in a way you can’t understand? So what if that other person is annoying you in some way? Shrug it all off and get on with your own day.

It doesn’t matter if you’re a size twelve. It doesn’t magically make you a happier person, you can just fit into smaller clothes. Don’t spend all that time fretting over your body and feeling guilty because you ordered a side of chips. Life’s too short.

Buying cheap clothes is a false economy. Those £2 vest tops from Primark might look appealing, but they’ll shrink and go baggy at the same time (it’s so weird how some clothes can manage both) and you’ll only have to fork out for new vest tops next year.

It’s OK to go to bed at 10pm. Some people just need more sleep than others, and that’s fine. Listen to your body and what it’s telling you. (Also: those people who stay up til 2am every night? They’re probably just on Twitter or watching Made In Chelsea – you’re not missing out on much.)

Shopping highs are great but it’s even better when you actually have the money before you spend it. Overdrafts and credit cards are bad news. The stress and guilt they bring will seriously kill that new-buy-buzz.

It’s OK to go out without wearing any make up. No one will notice (probably) and if they do, they won’t care.

Your house doesn’t have to look like those houses on Pinterest. So you live in a messy home? No one can see that mound of clean washing that has been sitting at the end of your spare bed for weeks. The upturned furniture covering holes dug by foxes in your garden aren’t that big a deal. The mass of toys in the dining room that you’ve been meaning to organise for ages aren’t hurting anyone.

Kick leaves, get muddy, be silly. Sometimes it’s good to just let go. We’re so busy trying to be sensible and make good decisions every day, but every now and then (at least once a day, I’d say), it does you some good to just go with the flow. 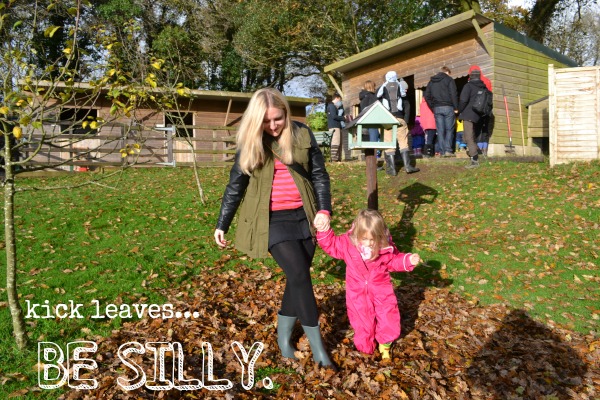