Next week, I’m heading to Britmums Live 2014 and I never usually take part in pre-conference intro post linkys but look! Here I am! Taking part. Go me.

I love a blogging conference – I’m such  geek that I enjoy soaking up as many new tips as possible. And it’s fantastic to see so many bloggers too. I used to find them pretty scary. My first ever blogging conference (Cybermummy 2011, fact fans) was three weeks after I started blogging. I knew NO ONE. But I just went, chatted to people I didn’t know and had a great time. Here’s me with Vicki from Honest Mum at Britmums Live 2013… scroll down for my answers to the I’m Going To Britmums Live 2014 linky questions. 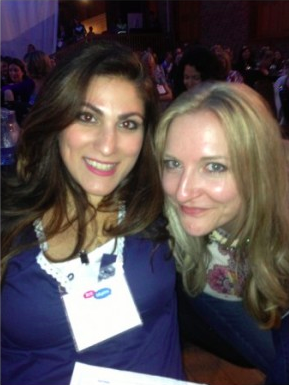 Blog: Not Another Mummy Blog

Twitter ID: @iamalisonperry (for general tweets) and @alisonperryblog (for blog and mum tweets)

Hair: Long blonde – either down and a bit scruffy or in a top knot or low bun.

Is this your first blogging conference?

No, I’ve been to six before. Eek, that’s a lot, considering I’ve only been blogging for three years. Here’s me with Alice from More That Toast last year at Britmums..

Are you attending both days?

Absolutely. I’ll be getting there straight from work for the start on Friday and will be back for more on Saturday.

What are you most looking forward to at BritMums Live 2014?

Catching up with lots of brilliant and lovely bloggers, especially the ones who live far away from me and who I only get to chat to on Twitter usually. And the ones who live near me too (like Sarah Grenglish and Sophie Franglaise Mummy below…)

What are you wearing?

At the moment I’m thinking black harem/formal joggers, a t-shirt, statement necklace and embellished flats. Might change into some heels for the evening. But that outfit will probably change at least 12 times before then. Last year, I wore jeans, tee, coral necklace and floral blazer.

What do you hope to gain from BritMums Live 2014?

I hope to learn lots of tips – there are always new things to be learned in blogging – and I love learning a new trick or discovering a new tool. I’m such a geek.

Do you have any tips to pass on to others who may not have been before?

Plan the sessions you want to go to, before you arrive (I never do this but will this year) and don’t be tempted to go to one that doesn’t appeal as much, just because your blogger friend is going to it. Also, the day can be pretty full-on… it’s a bit like a wedding in that there are SO MANY PEOPLE that you either know, recognise from Twitter and want to speak to, or who just come up for a random chat. My brain usually hurts after a few hours, so my advice is to pop to the loos for a quiet two minutes every few hours.

Are you going to Britmums Live? Comment below and say hi!