Poor Mr P. Not only is he a blogging widow (his latest TV series he watches while I blog, of an evening, is The Shield) but for the last nine months, he has been the only member of our family without a tablet to play with.

He bought me an iPad mini for my birthday last December and the four-year-old has all but claimed our first generation iPad as her own (well, she may as well have it. It’s so old, many apps don’t even work on it anymore *shakes fist at Apple’s clever money making scheme*)

Which, I’m sure you can imagine, must have been hard for him. I mean, he only had his iPhone 5S, Apple TV and a MacBook Air to play with. Poor wee soul.

But brilliantly, we were recently given a Kindle Fire HDX

and I thought it only fair that Mr P have it. And boy, is he like a kid with a new toy. Within minutes of unwrapping it, he had it set up and linked to his Amazon account, downloaded apps like Facebook and Twitter, and was setting up Amazon Prime Instant Video. 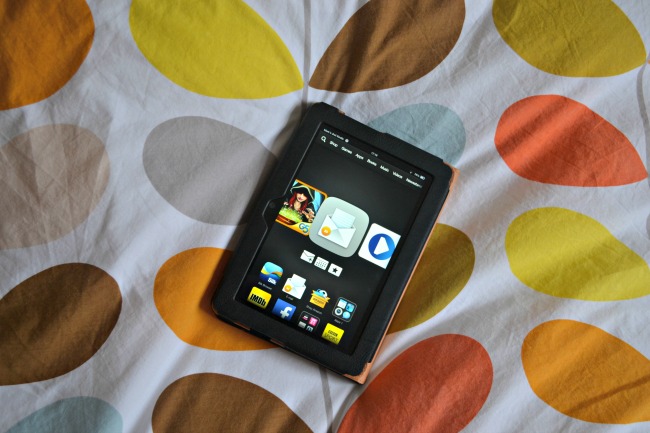 He hasn’t used the FreeTime feature which allows parents to curate content that their kids watch and control the areas of the Kindle that each family member can access.
He has watched the F1 on it.

He hasn’t used the feature which allows parents to have the Kindle shut off automatically at a certain time, so that when it’s kids’ bedtime or homework time, they can’t carry on using it.
He has played Fairway Solitaire on it.

He hasn’t allowed the four-year-old to watch many of the kids’ programmes on Amazon Prime Instant Video, including original shows like Annedroids, Tumble Leaf and Creative Galaxy.
He has surfed Buzzfeed on it.

He hasn’t allowed the four-year-old to watch Tangled, Peppa Pig and Toy Story, which are all available to stream on Amazon Prime Instant Video.
He has read the Hunger Games trilogy on it.

So while the four-year-old is not benefitting in any way from our lovely new toy, Mr P is happy. (And ssshh don’t tell him I sneakily watched a schmaltzy Miley Cyrus movie on it the other night.)