This morning at around 7.40am, I scrolled through my Twitter timeline to see a tweet from Piers Morgan saying that the royal baby was officially on its way. My first assumption was that the press had had a tip off about it, but I quickly realised that Clarence House had announced the fact that Kate Middleton had gone into labour, on its official Twitter account. 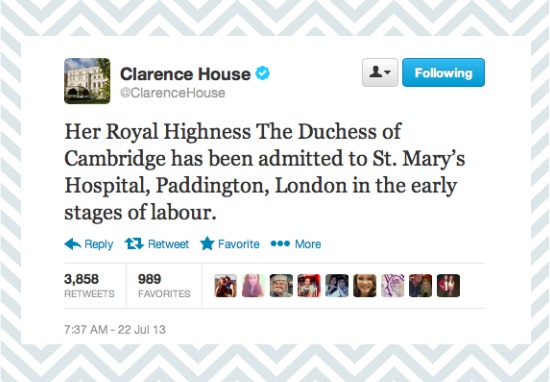 1. Wooo! The royal baby is coming!

2. Oh. Is it WEIRD that Clarence House tweeted to say Kate Middleton is in labour? I mean, tweeting to say she has had the baby, I can understand, but is it right that the Duchess of Cambridge has the entire world knowing she is probably 4cm dilated, listening to Calvin Harris whilst trying to stay in the hypnobirthing ‘zone’ and breathing through bloody painful contractions? 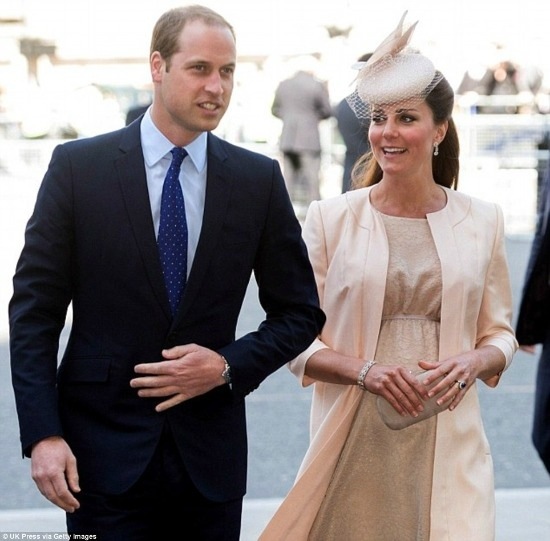 Was It Right For Clarence House To Announce Kate Middleton Going Into Labour, On Twitter?

“I think it’s exciting that we know Kate Middleton is in labour! It’s a huge historical moment and one we’ve been waiting for. I’m sure she’s known all along it would be this way – after all, Kate is a celebrity, not just a royal now!

“Lots of mums have ‘public’ births – I decided to live tweet my labour in 2010, not to ‘dispel birthing myths’ as many newspapers who covered the story said, or to ‘promote pain relief free labour’ as other papers insisted on writing about, but simply to share a positive homebirth experience with those people who wanted to follow my experience. Surprisingly, I had a few nasty tweets sent my way, but the majority were supportive and lovely. And to be honest, the support really helped with the whole pain relief.

“I managed a good ten hours of tweeting before I had to hand over to my husband. I needed to start concentrating a little bit more! Afterwards, I had a few emails from celebs and people all over the world, saying thanks for being brave and for showing a positive birth story. I loved it and felt so lucky to have an awesome birth.

“I’d do it again in a flash. And I’m really excited that the news of the royal baby’s birth was announced!’

“No!” says mum of one and writer Michelle Davies…

“Kate Middleton and Prince William’s baby will be the most written about and scrutinised infant of modern times. He or she will make Harper Beckham look like Greta Garbo.

“So is it too much to ask that they are given a bit of privacy coming up the birth canal?

“It makes no sense that the world has been informed Kate’s gone into labour. We don’t need to know. All Clarence House’s announcement has done is to stir up the media frenzy to hysterical levels and heap more pressure on Kate at a time when all she should be thinking about is her and the baby she’s trying to push out.

“Labour can be terrifying for first-time mums, and we all know it doesn’t always go according to plan. Kate doesn’t need the added stress of knowing the world is speculating how many centimetres dilated she is, or whether she needs an emergency c-section.

“My partner and I still cherish the time immediately after our daughter Sophie was born, before family and friends were informed of her arrival. It was just the three of us, wrapped in a bubble of bliss. With a statement to be made within minutes of their child coming into the world, how sad Kate and William have been robbed of experiencing that too.”

What do you think about this? Please do comment below with your thoughts! 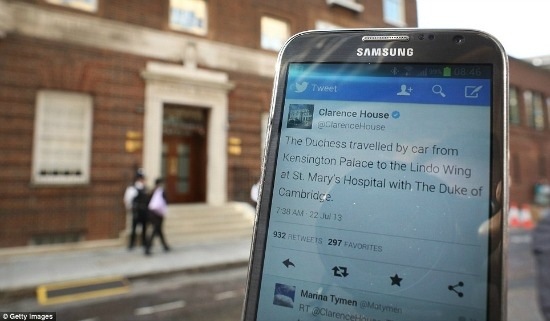