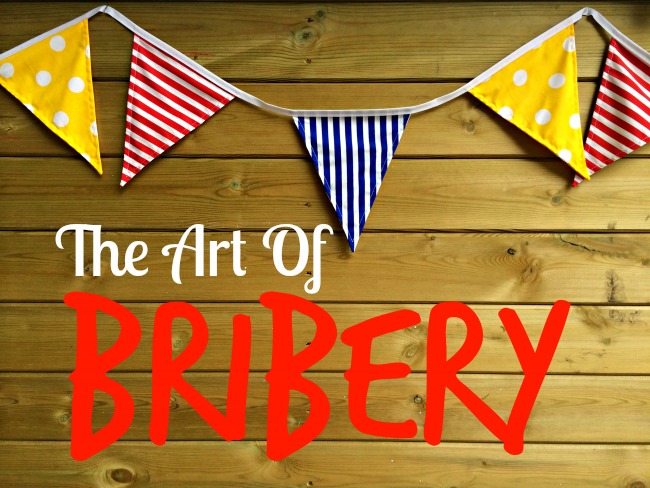 Gina Ford. Jo Frost. Heidi Murkoff. These people all have their own theories on how to best deal with your baby or child. They have pearls of wisdom about sleep training, controlled crying, routines, feeding on demand, behavioural issues and more. (Whether you choose to follow their advice is another matter altogether…) Strangely, though, none of them advocate my favourite method of parenting: bribery.

I am an unashamed fan of bribing my daughter. I use anything and everything I can – ice cream, use of the iPad, going swimming at the weekend, extra bedtime stories and the general vague promise of ‘doing something really fun tomorrow’. Basically, if it’s something she loves, it’s used to bribe her. And now that she is approaching four, I find myself turning to this method more and more, and in different ways…

Bribing her to behave

Take the other day, for example. She asked for an ice cream at the zoo. “If you’re a REALLY good girl all afternoon at the zoo, you can have an ice cream before we leave.” This was followed by gentle reminders every time she started to whine about her legs being tired/her arms being cold/her face paint rubbing off. “Remember, you need to be good if you want your ice cream….” In the end, she traded in her ice cream for a go on the bouncy castle (those fickle pre-schoolers!) but the bribery was still there. And she behaved… for the most part.

Bribing her to come somewhere boring with me

Last week, we were at the tail-end of a five hour car journey home from Wales. I’d dropped Mr P off in central London to meet friends for a drink (Partner Point: earned) and stopped off at Sainsbury’s to pick up some dinner for me and the small. Except she wouldn’t get out of the car. “No! I want to stay in the car and listen to Frozen!” she whined, not quite understanding that a three-year-old can’t just hang out in a car on her own. “Look, I’d love to leave you here, but it’s not really the done thing,” I joked. But despite my pleading, she point-blank refused to come. Until I used bribery. “Ooh I think they sell glitter in this shop,” I said brightly. “Shall we have a look and then when we get home, we can make glitter pictures?” (Clearly the LAST thing I want to be doing after a long journey home from Wales). But it worked, and she came with me into the shop. Win.

Bribing her to eat well

I can’t be the only parent of a three-year-old who just wants to eat sausages all day long? But that would clearly be mad (although in a real moment of weakness, whilst on holiday in Butlins recently, I did allow her to have sausages for breakfast, lunch AND tea. Don’t. I know. Annabel Karmel would have a fit). So I often bribe her to eat in a balanced way. “If you eat lots of your fish pie and peas, you can have some ice cream afterwards,” I’ll say. Sometimes we get desperate. “Right, for every mouthful of broccoli you have, you can have a chocolate raisin.”

Parenting experts say using bribery is a REALLY BAD THING TO DO. “Never use bribes or threats,” says the advice on the Supernanny website. “Instead, let your kids know the negative consequences of their actions, such as dirty clothes on the floor means no pretty party dress to wear to their friend’s birthday.” They quote a Dr Howard Sloane, educational psychologist and author of The Good Kid Book, who says, “The issue most ‘experts’ don’t explain is the difference between threats and appropriate consequences. Saying in advance, ‘If you clean your room you can watch telly,’ stresses that sometimes by not cleaning your room someone will later offer a bribe to clean it. Waiting until they clean their room and then offering it is much, much better.”

I can see Dr Sloane’s point but is it really such a bad tactic to use with your kids? As grown ups, we are often motivated by reward – we might work hard because our boss has hinted there’s a possible promotion on the cards. So is it really the worst thing to teach a kid?

Well apparently, there’s a slight knack in bribing a child in ‘a good way’. You promise them the treat when they’re behaving well, rather than when they’re having a tantrum/refusing to leave the house/shouting at you. Virginia Shiller, clinical psychologist and co-author of Rewards For Kids! Ready-to-Use Charts & Activities for Positive Parenting says, “Offer rewards for good behaviour before your child has a chance to misbehave. That way, you can feel fully in charge of the terms – both what you’re offering and what you’ll give it for – instead of making promises (sometimes outrageous ones!) out of mortification and desperation just to stop a public tantrum.”

Since I’m not quite ready to give up on bribery just yet, I’m going to take this advice and see where it leads us. Do you bribe your kids, or are you in utter shock, reading this because it’s the last thing you’d do? 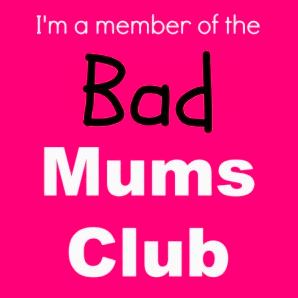