Awkward, presumptuous questions are nothing new – when you’ve been with your partner for a few years, you start getting the “Oh it’ll be you next!” comments at every wedding you go to. Then, when you do get married, the questions about babies start. I remember when we moved from our one bedroom flat into a three bedroom house, so many people (including colleagues who were just making small talk in the office kitchenette) saying “Ooh! Lots of space for babies!” to me. “Oh no!” I’d say. “Too soon for that. We’re going to turn our third bedroom into a games room.” Three months later, I was pregnant. “We KNEW you’d be having babies soon!” those same people chimed, happily.

Which is all well and good. But WHY is it deemed an acceptable subject of chit-chat? Why do most people think that asking about something that is closely linked to a) the state of my ovaries and his sperm count b) my emotional maturity c) my bank balance, is in any way an OK thing to do? It’s such a personal thing. There can be so many reasons that a couple haven’t had a child. Putting someone on the spot while they make a cup of tea before a work meeting is just so awkward.

And of course, it doesn’t stop there. Now my child is over the age of 2, I am asked on a semi-regular basis variations on this question:

“When do you think number two will be along, then?” / “Have you thought about having another baby?” / “Do you guys fancy having any more kids?”

*screams silently into a pillow*

The reality is that people asking these questions are just making “polite” conversation. They’re not trying to create an awkward situation or make someone feel uncomfortable. But it’s a bit like walking into someone’s house, taking a look around and saying “So, are you thinking about moving any time soon, then?” You just wouldn’t do it, would you? It implies that their current situation somehow needs to be upgraded. “Nice car, mate, but do you think you might buy a BMW in the next few months?” (Just. Rude.) Yet for some reason, it’s perfectly socially acceptable to ask if someone is going to upgrade their family.

Next time, someone asks me if I’m thinking about having a second child, I’m going to say one of these things to them:

1. “We’ve been trying for ages, but every month, my period comes and I feel a bit crushed. Maybe my ovaries have just stopped working? What do you think?”

2. “To be honest, I struggled so much with a young baby, first time around, the thought of having another makes me feel physically sick.”

5. “Well, we would. Except that means having SEX. Eurgh.”

*and breathe* Never one to end a blog post on a downer, here’s a gratuitous shot of my SUPER CUTE tot blowing bubbles at a cat. (Psst! Tell me if you can think of any good responses to awkward questions….) 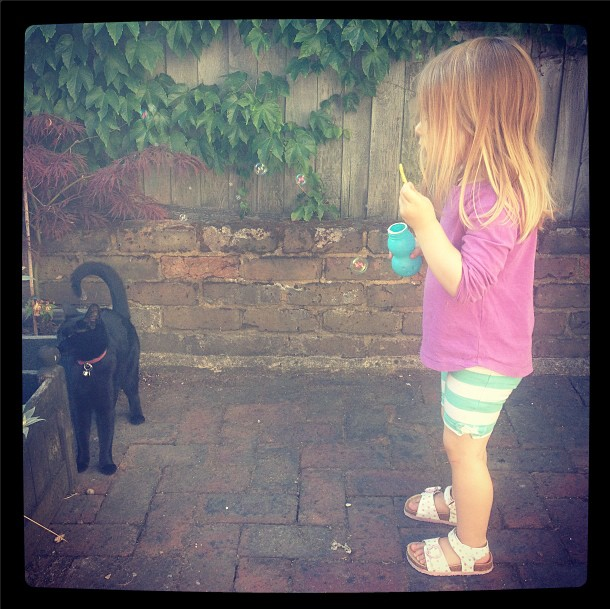