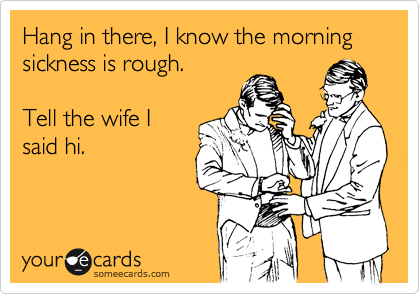 1. Morning sickness. In its all-consuming, green-tinged vileness. The worst thing about morning sickness is that it happens (usually) in that early stage of pregnancy when you’re keeping your mum-to-be status a secret. So not only do you have to cope with those waves of nausea, you have to do so in utter secrecy. Colleagues will think you’re grumpy (or bulimic. Or a grumpy bulimic.) I sat at my desk, quietly munching ginger nut biscuits, but not offering them around to anyone for fear of drawing attention to myself, thus resulting in my colleagues thinking I was greedy. And anyone who hasn’t been pregnant who offers a sympathetic smile and compares it to that norovirus bout they had – don’t. It’s not the same. Morning sickness can put a grey veil over a person’s life, making them miserable for weeks on end. Right at that point when they should be thinking “Hooray! I’m pregnant!”, they’re often thinking “Oh my god, I’m going to throw up in a bin.”

2. Giving birth. Disagree with me? I envy you. My birth was normal in the eyes of a midwife. MIDWIFES ARE CRAZY. Call that normal? It was like pooing out a Christmas turkey. Which to some people, might be normal, but not me.

3. The post-natal hormones. They messed with my head for months. Those 4pm crying sessions (I could have set my watch to them) were a treat. That constant anxious feeling I had was delightful, although I have to admit I found it fascinating when someone explained that mammals need that to kick in, to remind them that they have an offspring in the world that is relying on them to feed them and keep them warm. Ahh, isn’t nature fun?

5. The tiredness. I’m going to admit it now, I’m tired. I’m so tired that I go to bed at 9pm most nights, just to cope with the following day. I sometimes allow my toddler to watch nine, maybe ten, episodes of Peppa Pig in a row, just to give myself some time to sit on the sofa with my brain switched off. I blame my tiredness for the level of detail I’m familiar with Madame Gazelle, Pedro Pony and Grampy Rabbit.