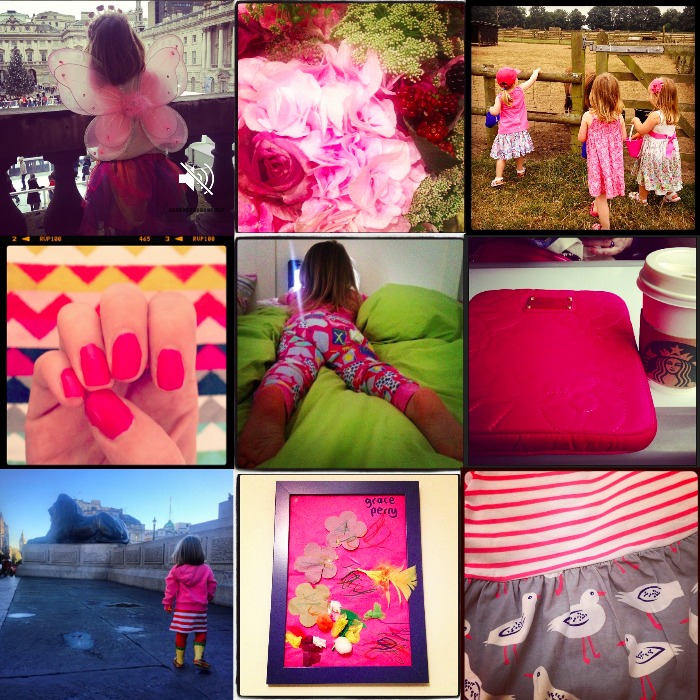 Recently, headlines about Jenny Willott, Consumer Affairs Minister were in most newspapers.

“Parents who dress their daughters in pink are holding back the economy, says minister” was the Telegraph headline.

Jenny Willott had been in an MP debate at Westminster Hall when she spoke about gender stereotypes and how they affect our children as they grow up and choose career paths. “Girls and boys take into the classroom assumptions that they develop as part of playing,” the Lib Dem minister told MPs.

“Boys who have routinely experienced the sense of accomplishment associated with designing and building something, which can often can come from playing with what would be seen as a boy’s toy, feel more at home with subjects such as maths and science, which utilise such skills more,” she continued.

“By the time they get to university level, boys and girls are strongly segregated in some areas with, on the whole, boys dominating in the subjects that can lead to the most financially lucrative careers.”

Gender stereotyping is something I feel strongly about. It’s so huge in my mind that I haven’t really talked about it on here – there’s just too much to say and so much angers me. In the past, I haven’t even known where to start.

The fact that so many kids’ toys are put into a “girls” category (often tea sets, pushchairs, art sets and dolls) or a “boys” category (often pirate ships, Lego, science kits, cars, trains and dinosaurs) is just inSANE. And it’s something that campaign Let Toys Be Toys has been fighting against since December 2012. They say that both boys and girls are missing out on developing important skills because they don’t have access to a wide range of toys and play experiences.

“How toys are labelled and displayed affects consumers’ buying habits,” say the people behind the campaign. “Many people feel uncomfortable buying a boy a pink toy or a girl a toy labelled as ‘for boys’. Other buyers may simply be unaware of the restricted choices they are offered. They may not notice that science kits and construction toys are missing from the “girls” section, or art & crafts and kitchen toys from the “boys”. If they’re never offered the chance, a child may never find out if they enjoy a certain toy or style of play.” 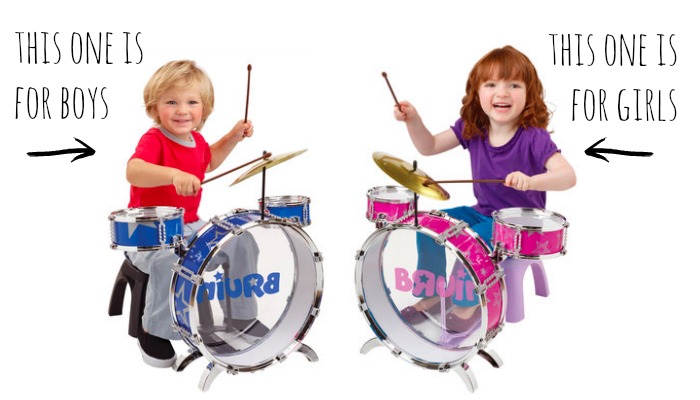 Heaven forbid a girl might play on a *shudder* blue drum kit.

In our house, with a three-year-old daughter, we have lots of pink toys – we have a buggy, a Little Tikes car, an art easel, a kids’ table, a scooter, princess accessories and puzzles to name but a few. We also have lots of toys that are other colours – a wooden train set, a blue shopping trolley, a red shop, a wooden kitchen, a red bike, blue and yellow cars. I think we do a pretty good job of buying a variety of toys for our three year old, and I know at her pre-school they encourage the girls to play with dinosaurs as much as they encourage the boys to play in ‘home corner’.

Many of our pink toys have been bought for us by friends and relatives. I’m not anti-pink toys, providing they’re part of a much wider variety, but what I do object to are pink coloured ‘domestic’ toys. Kitchens. Irons. Cooking sets. Vacuum cleaners. I’ve often said to my lovely husband that if someone were to buy our daughter one of these items in pink, I’d firstly smile and bite my tongue as it was unwrapped and secondly, replace it with a non-pink version at my first opportunity. If pink is used as a colour “for girls” by toy manufacturers (and we’ve already established that it is) then using this colour on domestic toys is surely teaching young girls – no matter how subconsciously – that domestic toys are for girls. Because cooking and cleaning are jobs for a woman, right?

*screams silently into a pillow*

It doesn’t even make sense anymore for pushchairs, dolls, toy cots and the like to be coloured pink. Thirty/forty years ago, men typically weren’t hands-on with their babies and young kids (I’ve been kind of horrified when my mum has described how she changed ALL the nappies when my brother and I were babies. But that’s how the world worked back then) But now, most dads are as hands-on with babies as mums are – changing nappies, making up bottles of formula, walking around for hours in the middle of the night with a crying newborn. So there’s no reason for baby dolls and accessories to be pink – yet they all are.

We need toy manufacturers and toy shops to stop with the gender stereotypes and wake up to the effect they’re having on kids – and our future doctors, lawyers, engineers, scientists. Many are starting to listen to Let Toys Be Toys, with changes being made in Boots, Marks and Spencer, Debenhams, Morrison’s, The Entertainer amongst others. You can sign their petition over here.

“Parents who dress their daughters in pink are holding back the economy, says minister”

Despite my strong feelings on gender stereotypes, I dress my daughter in a lot of pink. Why? Because it’s a nice colour. That sounds flippant, but I genuinely believe that as a parent who ensures my child has access to a wide variety of toys and playing experiences, it’s OK to dress my daughter in pink. I should probably clarify here that she also wears red, purple, blue, green, yellow, orange, black, brown, white, grey and any other colours you can think of.

Pink has always been one of my favourite colours (yes, I realise it’s probably because as a child, I was conditioned to believe that pink was for girls) and even now I am drawn towards pink flowers, pink iPad cases, pink wallpaper. Oh and I’m coveting this pink spring coat from Matalan.

I could refuse to dress my daughter in any pink. After all, the more little girls wearing pink, the more this gender stereotype is reinforced, right? But I feel strongly that we should live in a world where gender stereotypes don’t exist – toys should be for children, regardless of what kind of toy they are, and children should be able to wear any colour they like. And that means dressing my daughter in pink – as well as every other colour.

My three year old plays with cars, trains, tea sets, dinosaurs, a kitchen, a bike, dolls, footballs… and she wears pink. And I’m OK with that.