Every weekend, when we visit the local park, I can’t believe how many scooters we see. They’re everywhere! Our park even has a couple of little scooter stands where kids can park their scooters while they play. When our daughter turned two, we suggested to one set of grandparents that they might want to get her a scooter as a birthday present. Because I’m nice (*cough* a control freak) I did a bit of research. The choice?  We could either go for the brand-du-jour Micro Scooter or a much (much) cheaper alternative. Rather than suggest to my in-laws that they spend £50 on a present, I sent them a link to the £19.99 My First Scooter from Argos, which they bought. It looked sturdy and the ability to start with four wheels, and reduce to three wheels, then two, as the child gets older, appealed to me.

Fast forward six months, and the toddler loves her My First Scooter. She’s gained confidence and has really picked up the knack of ‘keeping-one-foot-still-and-the-other-foot-moving’ (not easy for a toddler!) But I often find myself looking wistfully at the Micro Scooters used by other kids in the park, and wondering if we made the right choice. I’m also a sucker for buying whatever is popular, and didn’t want Grace to feel left out that her scooter was different (I know. I KNOW!)

In the last couple of months, we’ve had the chance to roadtest a Mini Micro Scooter, and decide whether we were right to plump for the cheaper scooter or not…

What I love about the Mini Micro Scooter

The size of the range – you can get so many colours and customise your scooter with lights, bells, bags, dinosaurs, rainbows and bottle holders. Our neon orange version looks SO COOL. I also love how light it is – they’re designed so that children can lift them and carry them. Great if they get bored of scooting. 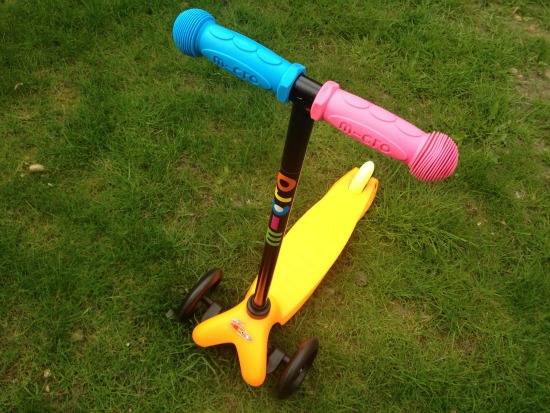 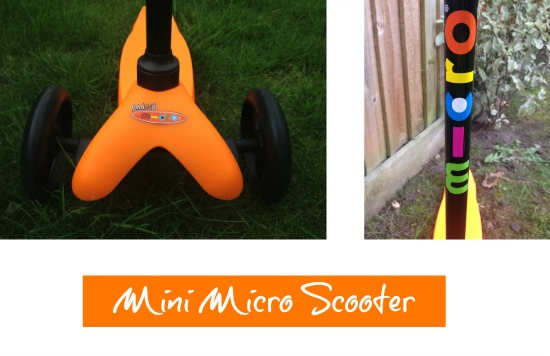 What I don’t love about the Mini Micro Scooter

The steering mechanism. Unlike the My First Scooter (which has a steering mechanism like a bike), the Mini Micro Scooter turns when the child leans in the direction they want to go in. But we didn’t realise this, and the scooter came with no instructions, so when it arrived, and the toddler tried it out, she found she couldn’t steer. We faffed around for a while until we eventually worked it out, but the uncertainty put her off using the scooter for a few weeks, despite our encouragement. She still hasn’t mastered the steering, and prefers to walk along, wheeling the scooter alongside her. The lack of instructions is a problem, not only because we had no heads-up on the steering, but also because apparently the scooter also has a brake (I only know this because a fellow blogger mention this to me in the pub one night.) I still haven’t worked out where the brake is or how you activate it. Instructions would help!

To be fair to Micro Scooter here, the Mini Micro Scooter is labelled as being suitable for ages 3-6, so perhaps they don’t expect a two-and-a-half year old to be able to steer it. 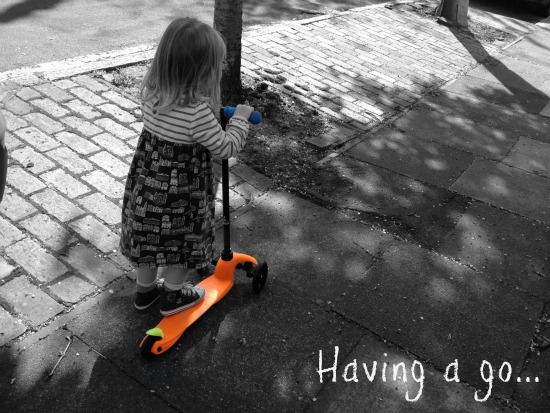 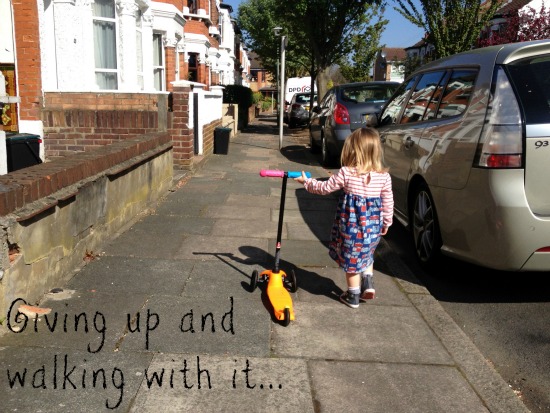 Psst! Micro Scooter sent me a scooter to review and all views are my own.

UPDATE (August 2014): The now nearly four-year-old asked today if she could use her Micro Scooter and we took it to pre-school. I explained to her how the steering worked and shouted “blue!” or “pink!” at her every time she needed to lean one way to avoid a wall/car/tree. She got pretty frustrated five minutes in and demanded we swap the scooter for her pink one (the Argos one) but I encouraged her to persevere and we got to her pre-school. I think this is what they call a breakthrough…

UPDATE 2 (January 2016): She’s five now and LOVES her Mini Micro Scooter. She has totally mastered the steering and whizzes along merrily. Honestly? I think 2 and a half was just too young to try her on it, so I recommend you wait til your child is three before you buy one. As a parent, I LOVE her Mini Micro – it’s so easy to pick up and carry, when she decides she wants to walk.